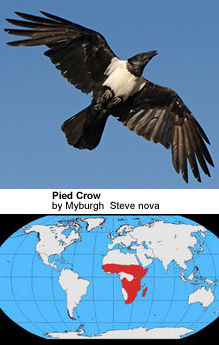 The Pied Crow (Corvus albus) is approximately the size of the European Carrion Crow or a little larger (46-50 cm in length) but has a proportionately larger bill and slightly longer tail, wings and longer legs. As its name suggests, its glossy black head and neck are interrupted by a large area of white feathering from the shoulders down to the lower breast. The tail, bill and wings are black too. It is rarely seen very far from human habitation though is not as tied to the urban way of life in the same way as the House Crow (Corvus splendens) of Asia.

This species, Africa's most widespread member of the genus Corvus occurs from Sub-Saharan Africa down to the Cape of Good Hope and also the large island of Madagascar, the Comoros islands, Aldabra, Zanzibar, Pemba and Fernando Po. It inhabits mainly open country with villages and towns nearby. It does not occur in the equatorial rainforest region.

Most of its food is obtained from the ground such as insects and other small invertebrates, small reptiles, small mammals, young birds and eggs, grain, peanuts, carrion and any scraps of human food and fruit. It has been recorded killing and eating roosting Fruit Bats and is frequently seen (sometimes in huge numbers) scavenging around slaughter houses.

The nest is usually built in tall, isolated trees though sometimes smaller specimens are used depending on availability. The cross supports of telephone poles are also frequently used. Eggs, average 4-5 from September to November (depending on latitude) and are pale green spotted with brown. The eggs are normally covered when the incubating female leaves the nest. Incubation is 18-19 days and the young are usually fledged by around 45 days. Both sexes rear the young.

The voice is described as a harsh "ar-ar-ar-ar" or "karh-karh-karh".

Structurally, the Pied Crow is perhaps better thought of as a small crow-sized Raven, especially as it can hybridise with the Somali Crow (Dwarf Raven), Corvus edithae where their ranges meet in the Horn of Africa. Its behaviour though is more typical of the Eurasian Carrion Crows and it may perhaps prove to be a modern day link (along with the Somali Crow) between the Eurasian Crows and the Northern Ravens.

In aviculture, the Pied Crow requires large amounts of space and is not suited to anything smaller than a room as it is a highly active jumper and flyer. It can adjust to cooler climates, but shelter from the wind and a heated perch is recommended. It requires toys and social time, along with a good diet of vegetables and meat. A hand-raised Pied Crow will speak and mimic sounds sometimes with alarming accuracy! Other captive corvids, including ravens, will mimic sounds, as will some starlings, including the European Starling and mynas.