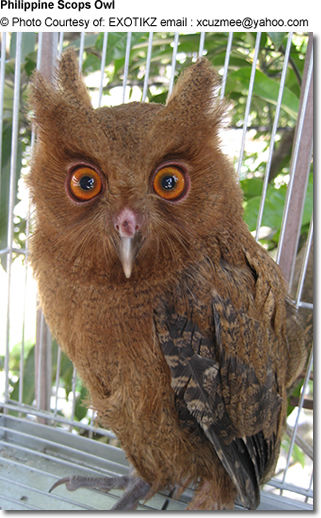 The Philippine Scops Owl (Otus megalotis, formerly known as Otus whiteheadi) is a common owl that is endemic to the Philippines, where they are usually found in forests or along forest edges. It is one of sixteen owl species found in the Philippines.

The adult owl averages 20 cm or 7.9 inches in length. They have large erect ears, as their name "megalotis" indicates.

Their big forward-facing eyes are dark with an orange-red rim. Their crown, ear tufts and feathers are dark brown, with dark streaks above. The facial disk has a dark rim. The forehead has a whitish pale color. 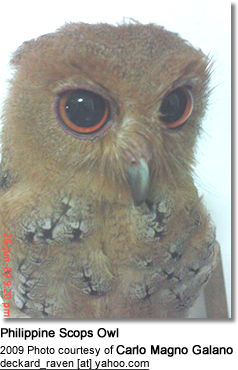 The owlets are rusty red in color and retain this until they are juveniles. Owlet feathers are fluffier and softer from juvenile to sub-adult, at which stage it starts to show a black and whitish-grey coloration. Then from sub-adult to adult, the plumage changes to a wood/bark-like color.

The Philippine Scops Owls live alone or in monogamous pairs. They breed throughout the year, resulting in 1-2 eggs.

Carlo Magno Galano, owl rehabilitator, adds: A rehabilitator in the Philippines bred these owls in captivity. He found that these owls become sexually mature when they are about two years old. They successfully hatched 2 eggs, but sadly one died after a few weeks. The other one survived. 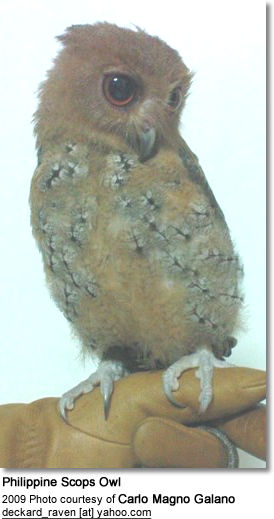 Philippine Scops Owls prey at night on insects and small mammals, hunting them from perches in semi-open landscapes. They have an excellent sense of hearing which helps them locate their prey and their well-developed raptorial claws and a curved bill facilitate tearing their prey into pieces that are small enough to swallow.

Carlo Magno Galano, owl rehabilitator, adds: Based on what I have observed, the feeding habits of this owl are rather brutal. They crush the head of their prey to kill it, then proceed to crush every bone in the body of their prey. Then they swallow it whole. I found that many (majority of?) juveniles die due to suffocation after accidental swallowing large prey...

Carlo Magno Galano forwarded to Avianweb photos of a Philippine Scope Owl (featured on this page, as noted), with the following information:

"I have a philippine scops owl under my care (it came in as an orphan victim of [an] illegal pet trade). I just want to [share with] the whole world how beautiful [this] species [is]." 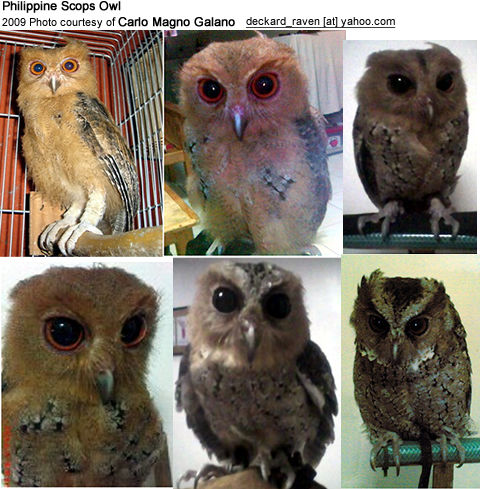 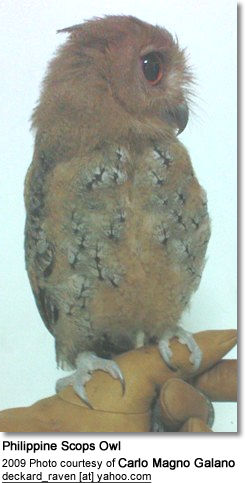