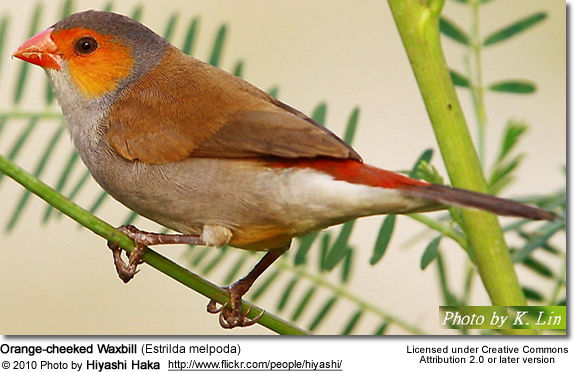 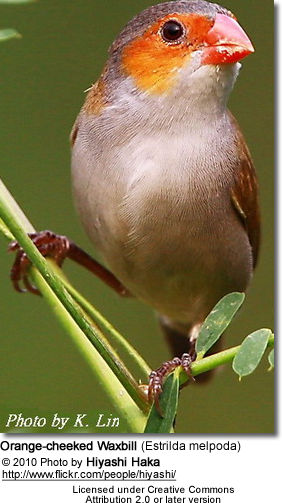 The Orange-cheeked Waxbill (Estrilda melpoda) is a common finch found in western and central Africa.

The Orange-cheeked Waxbills occur naturally in the following African countries:

Their preferred habitats include:

The colorful and energetic Orange-cheeks live in small family groups or flocks of thirty of more individuals. Their high-pitched "peeps" are the best clue of their presence. Like most estridid finches, they are very acrobatic, climbing up and down vertical twigs and grass stems. 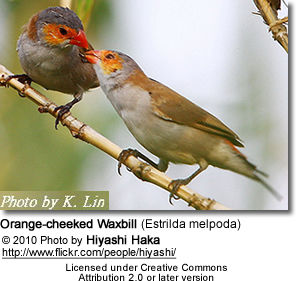 Orange-cheeked Waxbills average 4 inches in size, including the tail.

Males and females look alike - although some state that females are slightly duller, have slightly duller orange patches on the abdomen and mostly lack the salmon vent coloring of the male. Even though this may be true in isolated cases, there are too many natural plumage variations in this species that this is a very inaccurate method of identifying the gender.

The song and courting display of the male are the best indicators of gender. Although some females will sometimes carry some grass and hop up and down on a perch, it is mostly the male that displays. Also, the hen's song is rather weak and not as pure and melodious as that of the male.

Immature birds look like their parents, but have duller orange ear coverts (feathers covering the ears) for the first few months. They will molt into the adult plumage when they are about 3 months old. 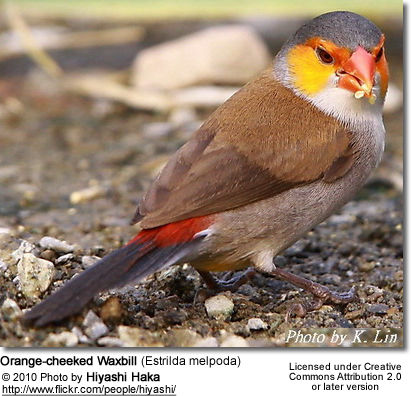 Orange-cheeked Waxbills may breed at any time of the year; but mostly they breed in spring when it gets warmer.

Orange-cheeked Waxbills like a lot of grass both for feeding as well as nesting. They feed on the seed heads and on insects found at its roots. They enjoy tall shrubbery and branches for roosting. The floor covering should be a dry substrate. Stands of clump and/or runner grasses and reeds which grow 40 cm or taller should be provided . They also like to nest in gorse or conifer branches - below one meter high. Walkways between any grass on the floor are important to avoid stepping on nests.

The eggs are incubated for about 12 to 14 days. The male incubates during the daytime, while the female takes over during the night.

The parents will feed the fledglings for another two weeks after they leave the nest . Independence occurs anytime between ten and 18 days (average noted being around 14-15).

Orange-cheeked Waxbills usually nest close to or directly on the ground in tangled clumps of tall grass.

Pairs will collect the grass stems together, favoring old seed heads (panicles) to camouflage the structure.

They line their nest with white feathers. The average nest consists of 3 - 6 tiny white eggs that are incubated for 13 to 14 days.

The young leave the nest when they are about 23 days old.

Orange-cheeked Waxbills typically feed on tiny grass seeds collect from the ground or from grass panicles. They hang on the stems and harvest the ripe or green seeds, sometimes while hanging upside down. During the breeding season, they also take small insects, such as termites, aphids and gnats due to their increased requirement for protein during this time.

Their staple diet consists of small green and ripe millets. They usually harvest these directly from the ripening heads. Breeders will typically place bundles of gathered seeding grasses in the flight to offer foraging opportunities.They enjoy spray millet and fresh fruits and vegetables as well. Care should be taken that anything fed to them is free of contaminants, such as pesticides.

During the breeding season especially, small mealworms, fruit flies and pinhead crickets (which some will take and others will not) should be offered. Some pairs will learn to take soft food substitutes, others will not. However, most will raise young on seed alone, if no other offerings are made.

If several species are kept in the flight, it is best to have several feeding and drinking stations, as aggressive species may prevent the more gentler species from approaching their favored feeding or watering station.