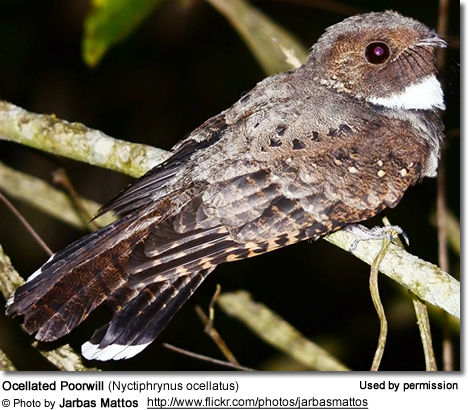 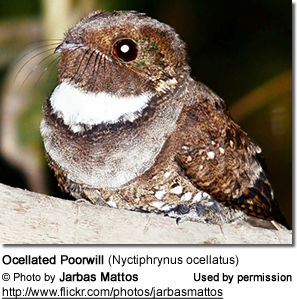 Due to their cryptic appearance, they blend perfectly into their woodsy habitat, and they are very difficult to spot during the daytime, when they are usually hidden away sleeping. These birds are most easily detected at night when light from car headlights are reflected red from their eyes, as they are sitting on tracks or roads. However, their presence is most often made known by their loud calls given at dusk. 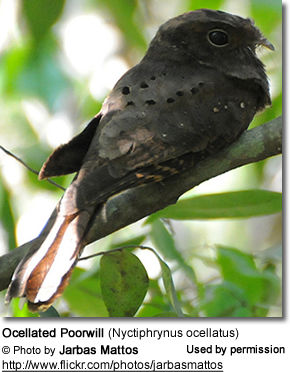 They are medium-sized nocturnal birds with long pointed wings and very short bills. They have short legs and small feet, of little use for walking. There is a distinctive wide bar on the throat. Males have white-tipped tails. Their soft plumage is cryptically colored to resemble bark or leaves. They blend perfectly into their habitat, making them very difficult to spot during the daytime, when they are usually hidden away sleeping. Their presence is most often made known by their loud calls given at dusk.

Juveniles lack the well-defined markings of the adults. 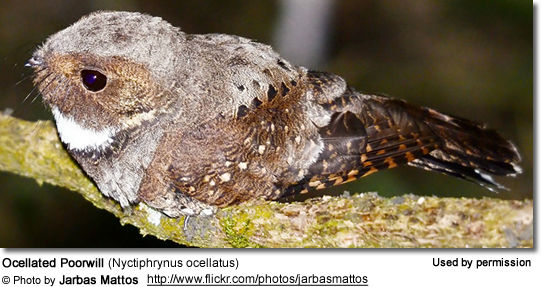 Their calls are described as an emphatic rising and falling trilled note that sound like "prEEoo".

Nightjars don't actually construct a nest, as most other bird species do. They simply place the eggs on the ground on open soil covered with dead leaves. They appear to have a propensity in for nesting near trails or open corridors through the forest. (Ref.: David L. Anderson - The Peregrine Fund).

The female may lay one to two eggs (mostly two) that are one egg that are pinkish-cinnamon in color with fine, chestnut spots on the larger, more rounded end. (Ref.: David L. Anderson - The Peregrine Fund).

The hatchlings are covered in down and are capable of short-distance movements within 24 hours of hatching. They usually move apart shortly after hatching, maybe to make it more difficult for predators to spot them. The parents also shove them apart with their feet as they flush from the nest. The male usually stands guard and defends the nest and the young. He will hover in place near the nest with his body in a nearly vertical position. The adults communicate with their young via soft clucking sounds to which the chicks respond.