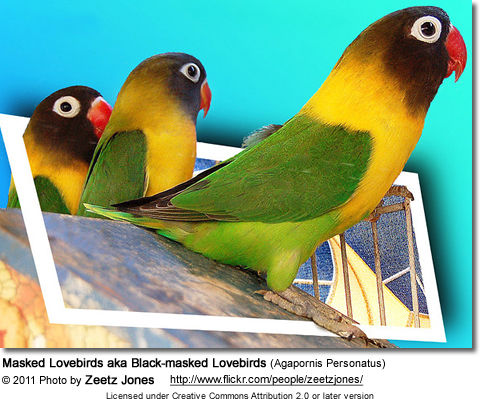 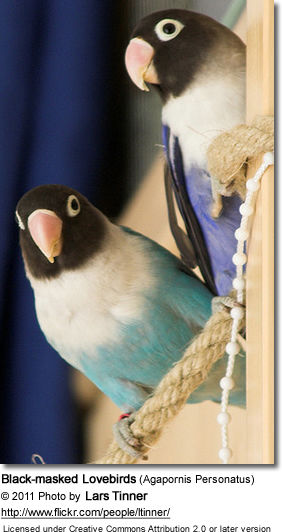 Masked Lovebirds aka Black-masked Lovebirds or Yellow-collared Lovebirds (Agapornis personatus) are small, stocky African parrots that are native to the inland plateaus of northern and central Tanzania in light brushwood and trees. Some flocks can also be found in north-east Kenya and in the coastal areas of Tanzania.

The Masked Lovebird were discovered in the late 1800s - but were not imported until the 1920's. The blue mutation also occurred in the wild, and was imported soon after its introduction.

These lovebirds are social creatures that form small nesting colonies in the wild. In captivity, they do best in an aviary setting. They are not happy in solitary confinement situations. They either need plenty of human attention or a mate.

Black-masked lovebirds, and the many color variations that have been produced in captivity, are very popular in the pet trade and are now some of the most common pet birds in America and Europe. 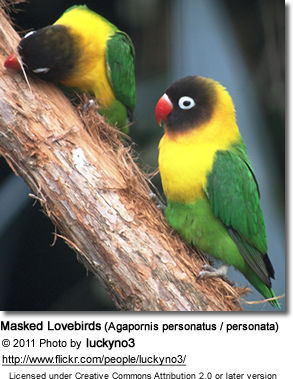 Masked lovebirds average 6 inches or 14.5 cm in length. The naturally occurring masked lovebirds have a green body color. The head is mostly black and the color of its plumage is except for a few highlights green with a yellow collar. However, other mutations -- specifically blue and yellow -- have been bred in captivity.


Besides the normal green coloration, there are several striking mutations: 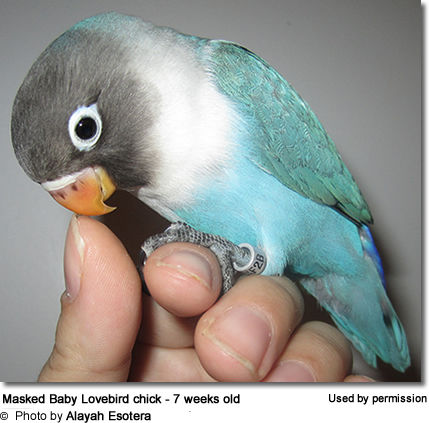 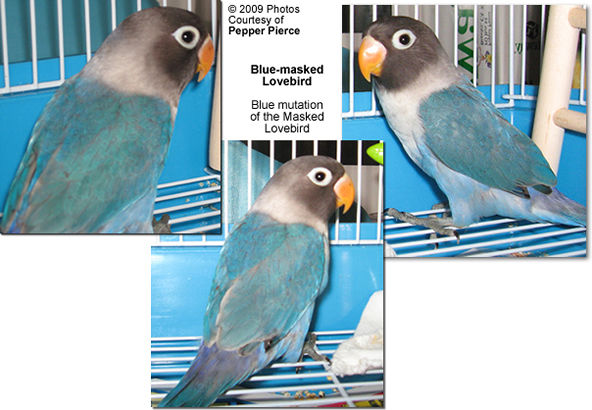 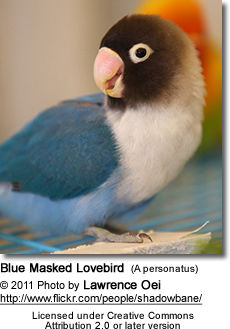 The Masked Lovebirds, also referred to as the "Eye-rings" by many breeders, are simply visually spectacular and fun aviary occupants. They are just as curious and clowny as the other lovebird species that I know of. Masked Lovebirds breed freely in colonies.

A colony of lovebirds can be noisy though. This needs to be taken into consideration when deciding on populating your aviary -- especially when your neighbors are close-by. If noise is an issue, it may be better to stick with finches, grass keets and canaries.

They are easy to care for and breed and, therefore, are readily available and several very attractive color mutations have been produced in captivity 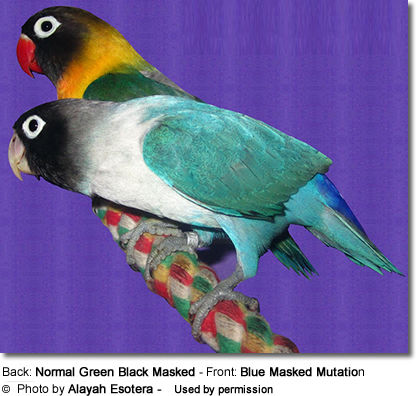 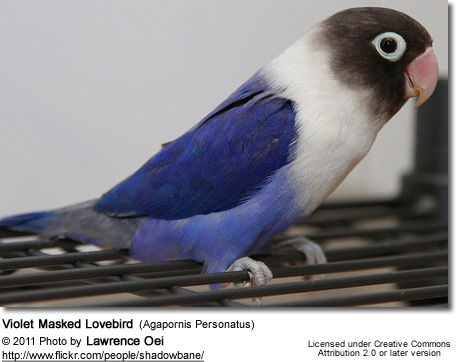 The black-masked lovebirds are quite popular as companion birds. They are friendly and sociable - but need the companionship of a mate or partner. Couples can be seen grooming and feeding each other. It's very endearing and fun to watch.

Younger parrots are easier to tame, although given time and attention, the vast majority of older birds will eventually gain trust and overcome their fear of humans.

In a cage of medium size, the birds can be put together in pairs or on their own. Taming is easier if the birds are kept alone. There have to be enough rungs in a cage so the birds can move around freely and keep themselves amused. One may occasionally offer them willow twigs to amuse themselves while nibbling. In nature they live in habitats surrounded with water, so it is necessary to provide them with more bathing facilities than for other parrots

If kept alone, they require a lot of attention from the owner to make up for the lack of a cage mate. Unless you have a lot of time to give, this is not recommended. If ignored, they are likely to turn aggressive and neurotic, as many parrots will.

Lovebirds, in general, can be aggressive to birds outside their own family group. Care is to be taken when introducing new birds into the area.

Their life span is generally about 15 years or longer. 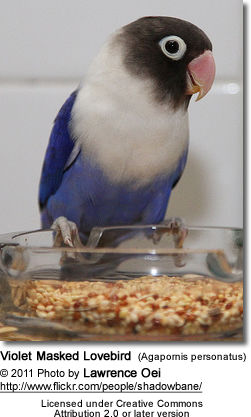 Lovebirds are pretty easy to manage for most people. They are not as destructive and noisy as their larger cousins. If not properly socialized, however, they will discover their beaks as method of "disciplining us". 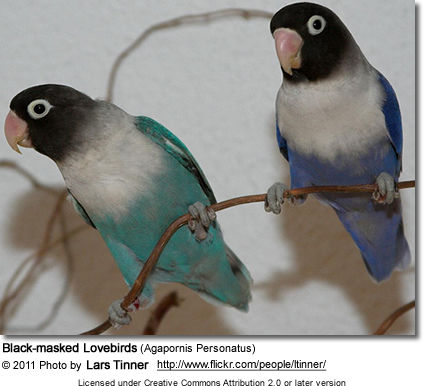 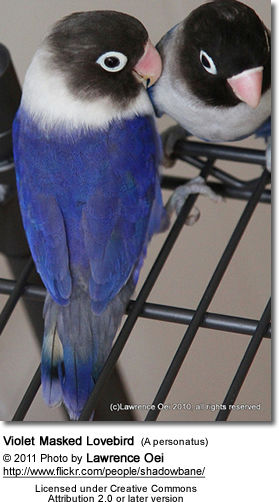 If you are considering a conure as a pet, the following web resources might be of interest:

Black-masked lovebirds can start breeding when they are as young as ten months of age and may continue until they are five to six years. They are very prolific and may produce several egg clutches within a single year. Due to this, they are usually readily available on the pet market.

The nests are almost entirely made by the females and the three to six eggs are incubated for about twenty-three days. The hatchlings will be cared for by the female until they leave the nest at about six weeks of age. The father then takes over the feeding of the young birds for another two weeks or so until they are weaned.

Lovebirds should be fed a quality seed mix, in addition to providing them with vegetables and fruits. It is recommended to supplement their diet with vitamins and minerals. Bird-specific vitamins are available at the vets or better pet stores. 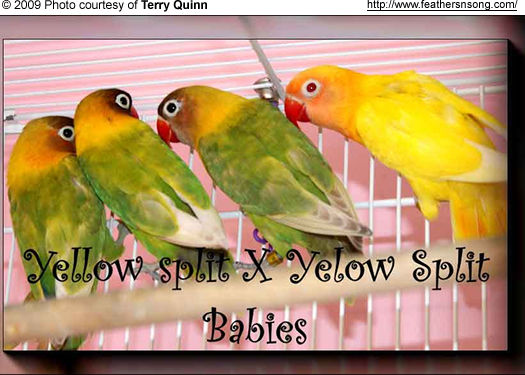