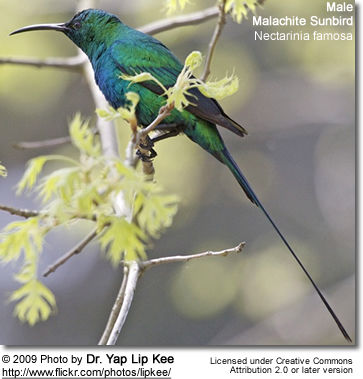 The Malachite Sunbird, Nectarinia famosa, is a small bird with two subspecies.

This large sunbird is found in hilly fynbos, protea and aloehabitat and cool montane and coastal scrub, up to 2,800 m altitude in South Africa. It also occurs in parks and gardens. It is resident, but may move downhill in winter. Frequently found nesting in suburban gardens of the Highveld.

This species is common in the highlands. It is territorial and aggressive when nesting, but highly gregarious when not breeding, forming flocks of more than 1000 birds.

The sunbirds are a group of very small Old World passerine birds which feed largely on nectar, although they will also take insects, especially when feeding young. This sunbird will flycatch for insect prey

Most species can take nectar by hovering like a hummingbird, but usually perch to feed most of the time. They have long thin down-curved bills and brush-tipped tubular tongues, both adaptations to nectar feeding.

The oval nest is usually suspended, as with most sunbirds, or built in a bush.

The female incubates one to three dark-blotched greenish eggs for two weeks. The chicks are fed by both parents until fledging; they will continue to return to the nest to roost. Malachite Sunbird is often double-brooded, but may be parasitised by Klaas's Cuckoo or Red-chested Cuckoo.

The breeding male Malachite Sunbird, which has very long central tail feathers, is 25 cm long, and the shorter-tailed female 15 cm. The adult male is metallic green when breeding, with blackish-green wings with small yellow pectoral patches. In non-breeding (eclipse) plumage, the male’s upperparts are brown apart from the green wings and tail, the latter retaining the elongated feathers. The underparts in eclipse plumage are yellow, flecked with green.

The female has brown upperparts and dull yellow underparts with some indistinct streaking on the breast. Her tail is square-ended. The juvenile resembles the female.

Sunbird flight is fast and direct on short wings. 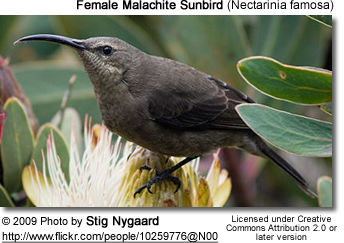 The call is a loud tseep-tseep, and the male Malachite Sunbird has a twittering song, often accompanied by pointing its head upward and displaying the yellow pectoral tufts ("arm pits") with its wings half open. Males also have an elaborate display flight. 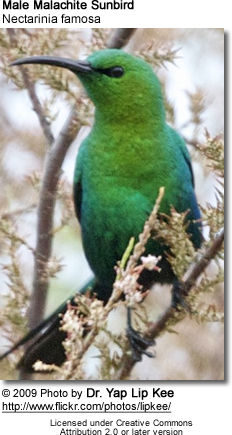 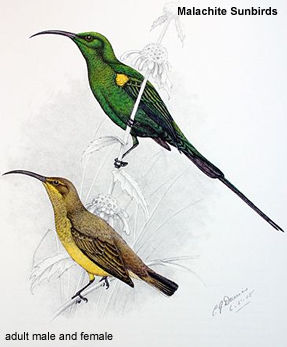