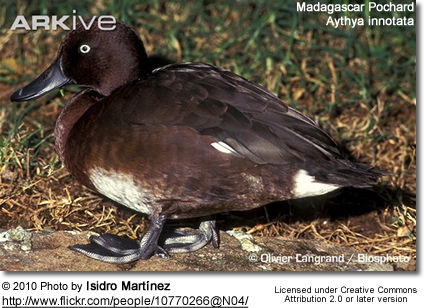 The Madagascar Pochard (Aythya innotata) is an extremely rare diving duck of the genus Aythya, previously thought extinct. Prior to a rediscovery in 2006, the last confirmed sighting of the species was at Lake Alaotra on the Central Plateau of Madagascar in 1991. The single male then encountered was captured and kept in the Antananarivo Botanical Gardens until its death one year later.

The threats and the decline

Based on the accounts written by Webb and Delacour's in the 1920s and 1930s it seemed that the bird was still relatively common at Lake Alaotra (these accounts also give an idea just how much the Lake Alaotra region has changed).

This bird probably started to decline dramatically sometime in the late 1940s or early 1950s and the cause of decline was the introduction of numerous fish species in the lake, they killed most of the pochard chicks; nesting sites as well as adult birds are also likely to have become victims of introduced fishes. Rice cultivation, cattle grazing on the shores, burning of shore vegetation, introduced mammals (rats), gill-net fishing and hunting are all factors that made this duck vanish completely from the lake. The last record of multiple birds at Lake Alaotra is from 9 June 1960 when a small flock of about 20 birds was spotted on the lake. Despite the rarity of the species in 1960, a male was shot, and the specimen is now held by the Zoological Museum Amsterdam. There is a very dubious report of a sighting made outside Antananarivo in 1970.

However, a flock of nine adults and four recently-hatched ducklings were discovered at a lake in a remote area of northern Madagascar in November 2006 [1].

A rescue plan involving the Durrell Wildlife Conservation Trust and the Wildfowl and Wetlands Trust removed a batch of ready-to-hatch eggs from a lake-side nest and incubated in a lab that was set up in a tent by the side of the lake. The day-old chicks were then taken to a holding facility.[2]

It was placed in the new "Possibly Extinct" category in the 2006 IUCN Red List; following the rediscovery, its old status of Critically Endangered is restored in the 2007 issue.

Pochard usually feed by diving or dabbling - and often at night. They will upend for food as well as the more characteristic diving. Their staple diet consists of aquatic plants with some mollusks, aquatic insects and small fish.