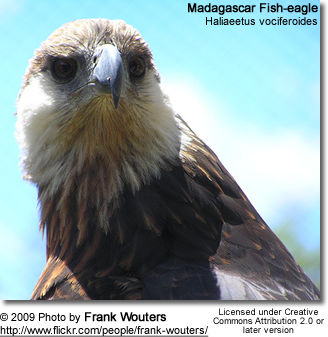 The Madagascar Fish-eagle (Haliaeetus vociferoides) or Madagascar Sea-eagle (to distinguish it from the Ichthyophaga fishing-eagles), is a large bird of prey in the family Accipitridae which also includes many other diurnal raptors such as kites, buzzards and harriers.

This species is endemic to Madagascar, where it survives in low numbers along the west coast within Madagascar's dry deciduous forests.

This species is considered confined to the northwest coast of Madagascar north of Morondava.

The principal locus of population according to the United Nations Environmental Programme is in the Analova region; 20 to 25 breeding pairs were there as of the 1980s. A more recent survey by Garbutt and Hogan report a smaller concentration of at least three breeding pairs in the Anjajavy Forest along the Indian Ocean, where several streams discharge north of Anjajavy Village. Total population estimates from the United Nations and from Grambo place the world population of this species at about 40 breeding pairs; according to Grambo this bird may be one of the rarest birds on Earth. Other surveys between 1991 and 1995 recorded at least 222 adults from 105 sites, with an estimated 99 breeding pairs.

The main threats to its breeding habitat are deforestation, soil erosion and the development of wetland areas for rice-paddies. It is also in direct competition with humans for fish stocks.

Its closest relative is the African Fish-eagle, Haliaeetus vocifer. Together, they form a distinct species pair lineage of sea-eagles, which separated soon after the divergence of the genus; they retain the ancestral dark beak, talon, and eye, but unlike other Haliaeetus species, they always have at least partially white tails, even while juvenile. As in other sea-eagle species pairs, one species (the Madagascar Fish-eagle in this case) has a tan head, while the other has a white one.