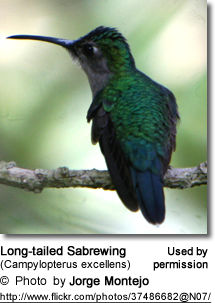 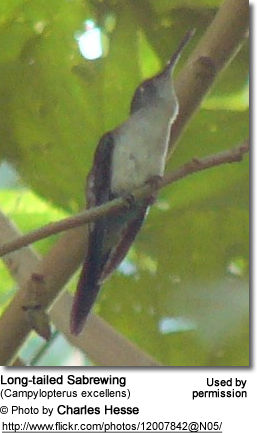 The Long-tailed Sabrewing occurs naturally around the Isthmus of Tehuantepec in southeastern Mexico. It is fairly common in forests in south-east Veracruz, north-east Oaxaca and west Chiapas. They are most common in the Sierra de los Tuxtlas in southeast Veracruz, and their alternative name "Tuxta Sabrewing - reflects that. There are records of this species occurring northwest of Tabasco.

It inhabits the interior and borders of humid evergreen forests.

Conservation Status: Its numbers have been declining due to habitat destruction.

The plumage on the back is metallic green and the chest and abdomen range from whitish to pale grey. It has a glossy blue-violet crown and a white spot behind each eye. The long tail is dark green and wedge-shaped.

The Sabrewings are named for their long, sabre-like outermost primary flight feathers, which are thickened, flattened and bent at an angle.

The song of the Long-tailed Sabrewing includes a complex vocal repertoire that is similar to that of starlings. In fact, it is the most complex song of any hummingbirds. It consists of more than 200 syllables and is even comparable with calls of the songbirds.

They rapidly emit chirping, insect-like vocalizations that can go on for several minutes before breaking into a series of excited warbled or gurgling notes.

Their calls include a persistent, insect-like chipping, squeaks, squeals, and a shrill, nasal peek.

Their songs are usually heard from dense vegetation. Males sing year-round, sometimes in small groups - particularly in the breeding season.

The female Sabrewing constructs the fairly large cup-shaped nest out of plant fibers that are woven together. Green moss is attached to the outside for camouflage. The nest is placed in a protected location on a low, thin horizonal branch of a shrub, bush or tree - usually situated over a stream. She lines the nest with soft plant fibers, animal hair and feather down, and strengthens the structure with spider webbing and other sticky material, giving it an elastic quality to allow it to stretch to double its size as the chicks grow and need more room.

The nest usually only one single egg, which the female incubates. The young are born blind, immobile and without any down.