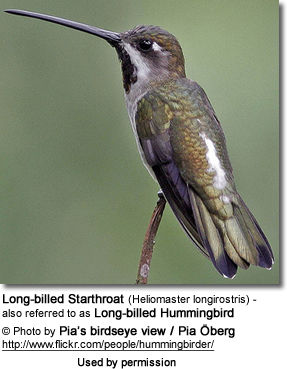 The Long-billed Starthroat (Heliomaster longirostris) - also commonly referred to as Long-billed Hummingbird - is found in Central America and northern South America, where it is an uncommon but widespread hummingbird species. 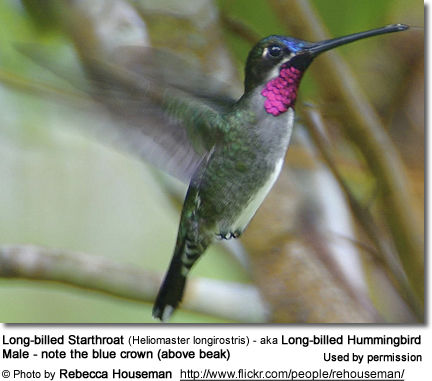 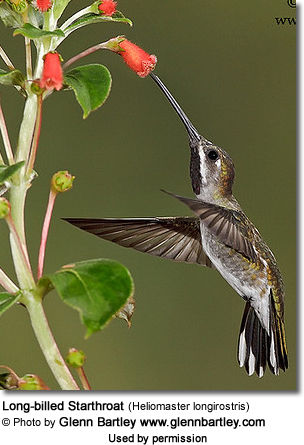 The Long-billed Starthroat is found from southern Mexico to Panama, from Colombia south and east to Bolivia and central and north-east Brazil, as well as occurring on the Caribbean island Trinidad. It appears to be a local or seasonal migrant.

They appear to avoid the shady forest interior, typically remaining along forest edges and woodland clearings; but may also occur in open habitats such as cerrado. They will also visit gardens..They typically remain up the canopy. 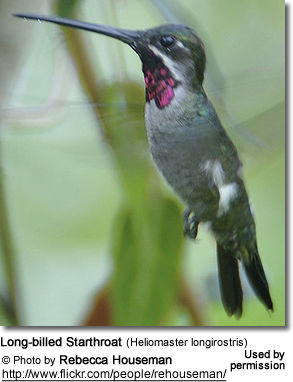 The male is bronze-green on the back. He has a blue crown, white small white spot behind the eyes, and a iridescence throat that is sometimes described as reddish or dark metallic purple.. The plumage below is grey, shading to white on the flanks and mid-abdomen. The mostly black tail is square and tipped with white.

The female looks similar, but she has a green crown and a purple-edged dusky grey throat.

The female Long-billed Starthroat is responsible for building the cup-shaped nest out of plant fibers woven together and green moss on the outside for camouflage in a protected location in a shrub, bush or tree. She lines the nest with soft plant fibers, animal hair and feather down, and strengthens the structure with spider webbing and other sticky material, giving it an elastic quality to allow it to stretch to double its size as the chicks grow and need more room. The nest is typically found on a low, thin horizontal branch. 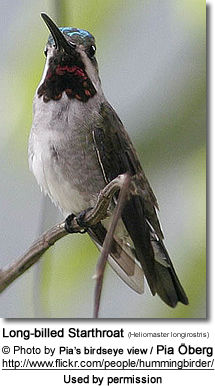 The Rainbow Starfrontlets primarily feed on nectar taken from a variety of brightly colored, scented small flowers of trees, herbs, shrubs and epiphytes. They favor flowers with the highest sugar content (often red-colored and tubular-shaped) and seek out, and aggressively protect, those areas containing flowers with high energy nectar.They use their long, extendible, straw-like tongues to retrieve the nectar while hovering with their tails cocked upward as they are licking at the nectar up to 13 times per second. Sometimes they may be seen hanging on the flower while feeding.

They also take some small spiders and insects - important sources of protein particularly needed during the breeding season to ensure the proper development of their young. The Rainbow Starfrontlets are often observed catching insects in midair ("hawking").

Its song, while feeding, is described as a light weet.