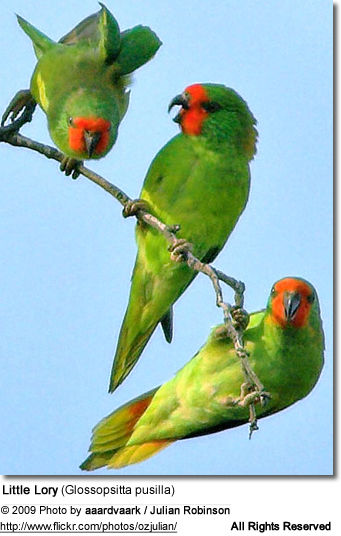 The Little Lory (Glossopsitta pusilla) is known by a variety of names, including Tiny Lorikeet, Red-faced Lorikeet, Gizzie, Slit and Jerryang.

Status in the Wild / Distribution

The Little Lory is native to eastern and south-eastern Australia, from the vicinity of Cairns southwards through Queensland and New South Wales from the western slopes of the Great Dividing Range eastwards to the coast, though most of Victoria and southeastern South Australia. Small populations also occur in Tasmania. This species is endangered in its natural habitat due to habitat destruction (CITES II).

They are usually seen in forest areas, especially in the vicinity of flowering or fruit-bearing vegetation. 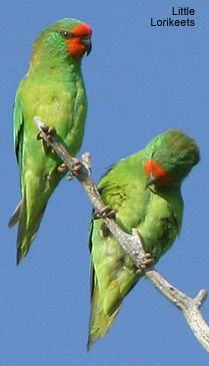 Little Lories average 15 cm (6 in) in length (including tail).

Both males and females look alike, except the plumage of the female is a little duller. The crown, lores (the regions between the eyes and bill on the side of a bird's head) and throat are red. The nape (lower back of the neck) and shoulder are bronze-colored and the remainder of the plumage is green. The underparts are yellow-tinged. The bill is black and the iris yellow-golden in color.

Their main diet consists of a variety of fruit and flowers, including native grasstrees, and tea-tree (Melaleuca spp.), Loranthus, and loquat (Eriobotrya japonica). They will also visit orchards.

They will typically nest in a tree cavity. Each clutch consists of 3 to 5 matte white eggs, measuring 20 x 16 mm. The eggs are incubated for about 3 weeks before they hatch.

Little Lorikeet are very rarely seen outside their natural range of Australia. Even within their native country, they are uncommon in captivity. These lories have not been doing well in captivity and have gained a reputation for being difficult to keep - most likely due to their very specific dietary requirements.

Their expected lifespan is 28+ years, provided their specific dietary needs are met. They reach maturity at 8 months or later. Males and females look alike and breeders depend on DNA or endoscopic sexing to determine their gender.