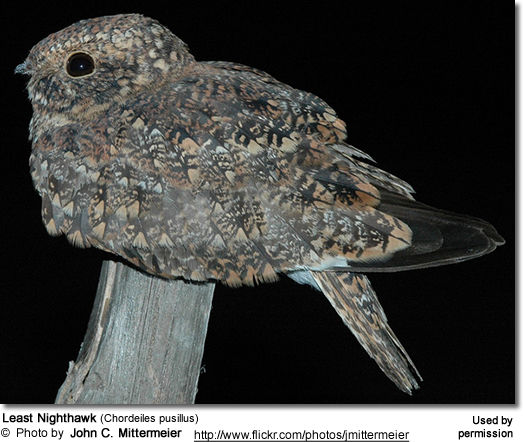 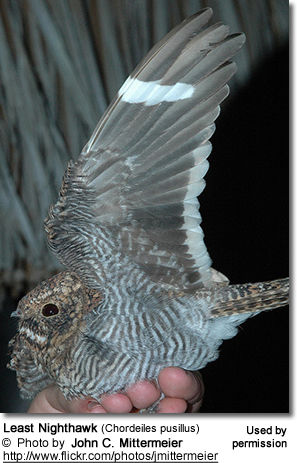 The Least Nighthawk (Chordeiles pusillus) is a South American nightjar. Both its common and Latin names (Latin: "tiny") were derived from its small size - as it is the smallest of the nighthawk family. It measures only about 6.3 inches (16 cm) in length - which makes it about the size of a House Sparrow.

Thanks to their cryptic appearance, these birds blend perfectly into their habitat and they are very difficult to spot during the daytime, when they are usually hidden away sleeping. They are most commonly detected at night when light from car headlights are reflected red from their eyes, as they are sitting on roads. However, their presence is most often made known by their loud calls given at dusk.

The adults are dark with brown, grey and white patterning on the upper plumage, nearly all white towards the vent / undertail. The plumage below (chest, belly) are barred white and brownish.

They have white wing bars that are seen in flight.

There is a white line on the throat.

As the young hatch, their skin is covered in down and are capable of short-distance movements within 24 hours of hatching. They usually move apart shortly after hatching, maybe to make it more difficult for predators to spot them. The parents also shove them apart with their feet as they flush from the nest. The male usually stands guard and defends the nest and the young. He will hover in place near the nest with his body in a nearly vertical position and his tail spread showing off his white barring. The adults communicate with their young via soft clucking sounds to which the chicks respond.

The female may lay a second clutch close to the first and while she is incubating the new set of eggs, the male continues to care for the young from first brood.