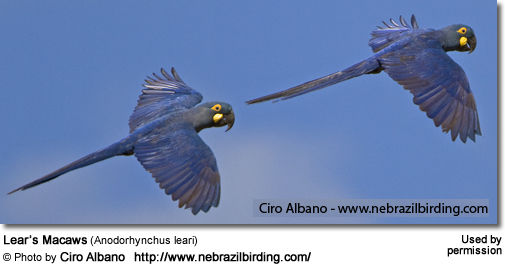 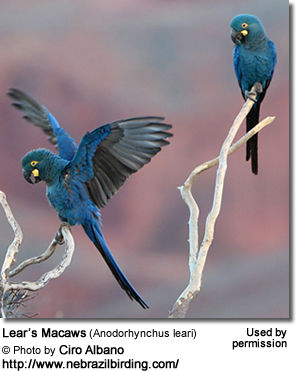 The Lears Macaw has a highly restricted natural range and is considered at risk of extinction. It was previously listed as Critically Endangered by Birdlife International (CITES I), based on a drastic historical decline in its population due to the following:

However, in 2009, this species has been downgraded to "Endangered" based on the yearly population count at the Toca Velha and Serra Branca roosting sites, which estimated the population at that time to be close to 1000 individuals. The reasons for this apparent recovery are likely to be intensive conservation actions, as well as the possibility of improved survey methods.

Trade of this species is illegal in Brazil, and only few of them occur outside of that country. Most of those that exist outside of Brazil are in cooperative breeding programs with Brazilian wildlife authorities. This species is also listed on the Endangered Species list in the United States, which prohibits transfers within states without permits. 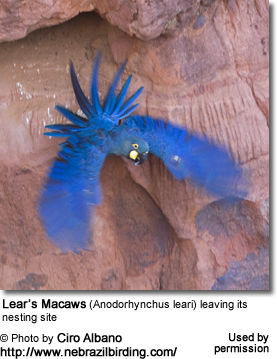 There are only 43 Lear's Macaws registered in the studbook as maintained in captivity. Most of them were confiscated by the authorities from illegal traders and are kept in zoological institutes in Brazil.

Most captive specimen are, however, old and breeding successes are rare, except for a few exceptions ... 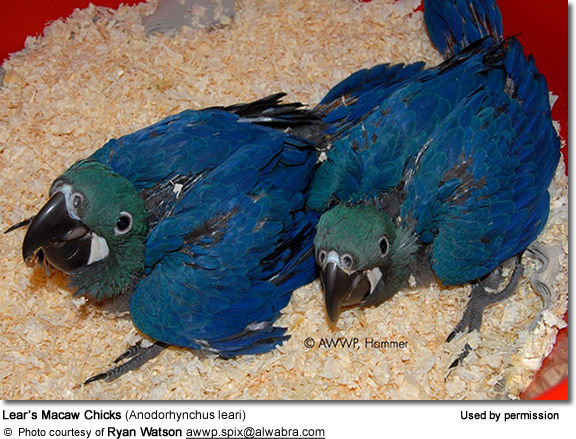 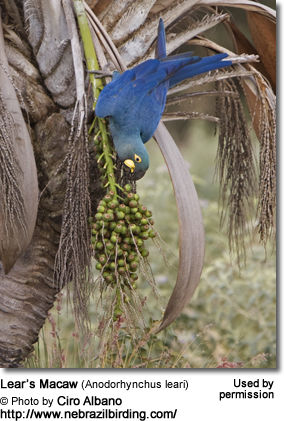 However, over last couple of decades its numbers increased due to major conservation efforts (including the protection of its favorite feeding tree) that have been successfully implemented.

Current conservation projects are managed under the authority of IBAMA (Brazilian Institute of Environment and Natural Renewable Resources). They are advised by the Committee For The Conservation And Management Of The Lear's Macaw. Qualified Brazilian and international organizations and individuals are invited to participate in this program as determined by the IBAMA.