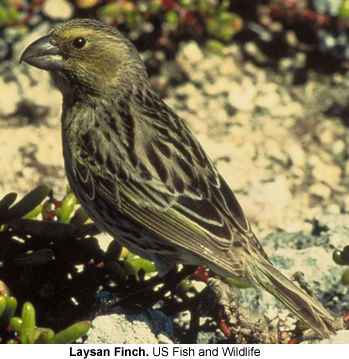 The Laysan Finch, Telespiza cantans, is a small yet bold bird found in the Northwestern Hawaiian Islands. The finch is actually a member of the Hawaiian honeycreepers, a family endemic to Hawaii, which is descended from finch family. It is one of 4 remaining finch-billed honeycreepers, and is closely related to the smaller Nihoa Finch. The Laysan Finch is named for Laysan, the island to which it was endemic on its discovery (it was subsequently introduced to a few other atolls).

The Laysan Finch is a large honeycreeper with a heavy bill. Overall the male has yellow plumage with a whitish belly and a grey neck. The female is duller than the male, with brown streaking. It is almost impossible to confuse the Laysan Finch with any other bird in the field as it is the only passerine species found on the few islands it lives on.

On its discovery the Laysan Finch was an endemic resident to the small island of Laysan, along with the Laysan Rail, the Laysan Honeycreeper, and the Laysan Duck and the Laysan Millerbird. Populations were introduced to several islands, including Pearl and Hermes Atoll, where the species persists, and Midway Atoll, where it survived until the introduction of rats. The fossil record shows that the finch once had a greater range in Hawaii, reaching as far as Oahu, and that the Laysan population is a relic.

The Laysan Finch nests in vegetation, laying 3 eggs in a cup shaped nest. These are incubated for 16 days by the female, the male in turn feeding the female. The chicks fledge after three weeks, and are cared for by the parents for another three weeks.

The Laysan Finch is a generalist, feeding on seeds, small insects, fruits, carrion (of seabirds and Hawaiian Monk Seals), and the eggs of nesting seabirds. While unable to break into the eggs of the larger seabirds (such as albatross and boobies) they will scavenge from them. They actively take the eggs of smaller seabirds such as White Terns, and the endemic Laysan Duck.

The Laysan Finch is listed as Vulnerable by the IUCN because of its highly restricted range and vulnerability to extremes of weather (it is considered endangered by the State of Hawaii and U.S. government). It survived the devastating effects of the introduction of rabbits (unlike the millerbird, honeycreeper and rail) by taking carrion and seabird eggs. Laysan is now part of the Hawaiian Islands National Wildlife Refuge.