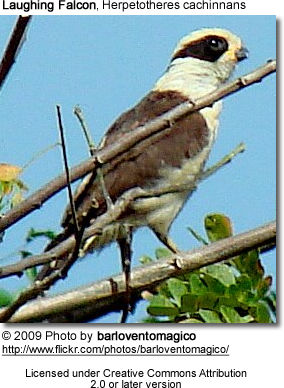 The Laughing Falcon, Herpetotheres cachinnans, also called the Snake Hawk, is a medium-sized bird of prey in the falcon family, the only member of the genus Herpetotheres. It is a specialist snake-eater.

Its relationships with other members of the Falconidae are unclear. Traditionally it has been placed in a subfamily with the caracaras and forest falcons, but the American Ornithologists' Union now places it in the same subfamily as the true falcons, and it has also been considered a subfamily of its own [Hawk Conservancy].

It is found from both coastal slopes of Mexico through Central and South America south to Amazonian Peru and Bolivia, practically all of Brazil, and northern Argentina, at altitudes up to 1500 m (rarely to 2400 m in Colombia).

It occupies varied habitats, usually including at least scattered trees. It is generally not migratory, though in some areas it may make seasonal movements.

As usual among birds of prey, the females are bigger, weighing 600 to 800 g compared to the males' 410 to 680 g. With its big white (immature) or pale buff (adult) head having a dark brown mask from the eyes around to the nape, it is unmistakable. The pale color of the head continues onto the underparts. The upperparts are dark brown, and the tail is dark brown with bold pale bands.

The flight is slow, with quick, shallow wingbeats interspersed with glides; the bird seldom or never soars. In flight it shows a rufous patch near each wingtip (formed by the basal parts of the primaries (longest wing feathers) and a shape more like an accipiter than its falcon relatives, with short, rounded wings and a long tail.

A Laughing Falcon often stays for hours on a perch (which is frequently conspicuous).

It catches snakes, including venomous ones, by pouncing on them from flight with a thud and then biting them just behind the head, sometimes removing it. It carries them to a perch to eat them. It may carry small snakes in its bill and swallow them tail-first; big snakes may be carried head-forward in its claws, as an Osprey carries a fish, and then torn to pieces. It supplements its diet with lizards, small rodents, and also bats and centipedes.

Its English name comes from its loud voice (as does the Latin epithet cachinnans, laughing aloud or immoderately.

The most common call is a long series of separate, rather human-like cries, each one often rising sharply in pitch in the middle and sometimes falling sharply at the very end. The series may be introduced by faster calls suggesting maniacal laughter. Sometimes two birds call together at different pitches and tempos.

The familiarity of these sounds in the American tropics is attested to by such common names as Acauã (Portuguese); Halcón Guaco, Halcón Macagua, and Guaicurú (Spanish); and Guaycurú (Guaraní).

The Laughing Falcon nests in rock crevices [Zoológico Electrónico], tree cavities, or occasionally in abandoned nests of other raptors. It lays one or two eggs or always just one]; the eggs have heavy dark brown markings on a brown or whitish or pale buff background.

The young are thought to leave the nest at eight weeks.