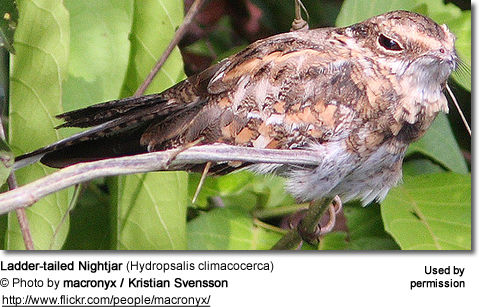 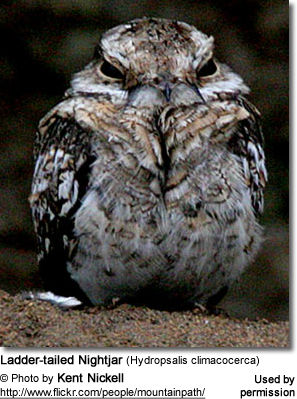 The Ladder-tailed Nightjars (Hydropsalis climacocerca) - sometimes also referred to as Guiana Goatsuckers - are South American nightjars that occur naturally in all regions of the Amazon Basin and in the Guiana Shield and the Guianan countries. The Scissor-tailed Nightjar is its sister species.

It is a member of the Caprimulgidae family which is sometimes referred to as goatsuckers, as they were often seen in fields together with goats and sheep, and the myth was born that they were there to suck milk from the teats of goats (the Latin word for goat-sucker or goat-milker is Caprimulgus). However, instead they fed on the insects that were attracted to livestock. In the past, night-flying birds - such as the nightjars - were suspected of witchery.

These nightjars, as suggested by the name, are strictly nocturnal. Throughout the day, they typically rest quietly in densely vegetated hiding places. At night, they become active as they hunt flying insects in more open landscapes, such as forest clearings, wetlands and along rivers.

Their cryptic appearance allows these birds to blend perfectly into their habitat and they are very difficult to spot during the daytime, when they are usually hidden away sleeping. They are most easily detected at night when light from car headlights are reflected red from their eyes, as they are sitting on tracks or roads. However, their presence is most often made known by their loud calls given at dusk. 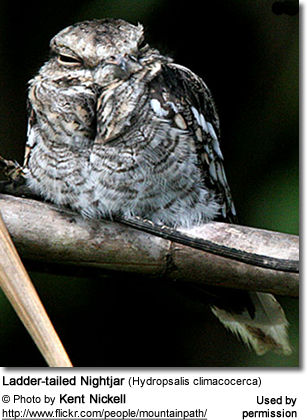 The Ladder-tailed Nightjars occur naturally in the Amazon Basin of Brazil ranging north to Colombia and Venezuela (the Orinoco RIver Basin), the Guianas, Guyana, Suriname and French Guiana, as well as the AmazonianEcuador, Peru and Bolivia.

They are usually found close to rivers and fresh water lakes in a wide range of habitats. During the daytime, they typically roost on gravel bars or dead trees overhanging a body of water. They mostly live in pairs rather than flocks.

Note: The validity of the subspecies intercedens, pallidior and canescens is questioned by some authorities as very little information is available about these races and all three share a very limited common range, between Obidos and Santarém in the lower Amazon region. 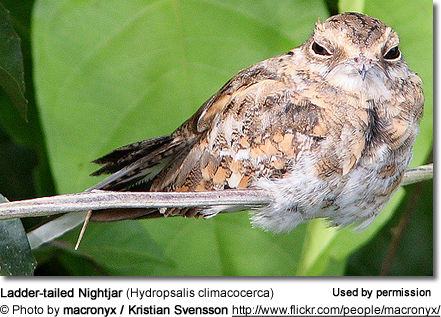 The male's plumage is patterned with white, dark and light greys, and some brown patches - particularly around the neck and head. It has a relatively long, W-shaped tail with white markings and a prominent white patch on the outer flight feathers.

The female's plumage is duller and the white markings on the male's wings and tail are replaced with cinnamon. 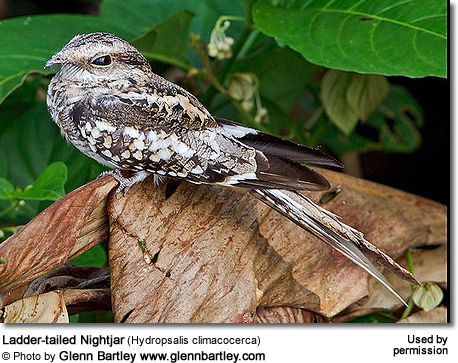 During the day, the incubation of the eggs is undertaken by the female, while both parents share the incubation at night. The incubation period is about 19 to 21 days to hatching. The young are covered in down and are capable of short-distance movements within 24 hours of hatching. The male usually stands guard and defends the nest and the nestlings. He will hover in place near the nest with his body in a nearly vertical position. The parents communicate with their young via soft clucking sounds to which the chicks respond.

The adults feed the young regurgitated food (insects), and they continue to brood them until fledging. The chicks take their first flight when they are about 20 to 21 days old.