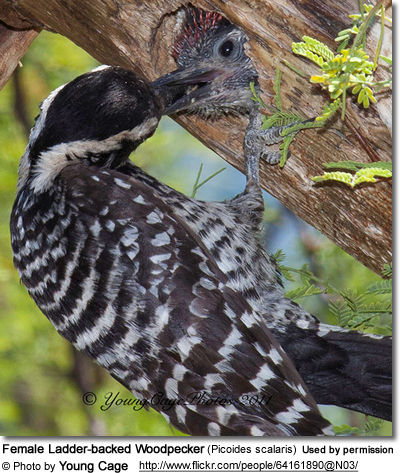 The Ladder-backed Woodpecker (Picoides scalaris) was first described in 1829 by Johann Georg Wagler, a German herpetologist. It has been termed the “Cactus Woodpecker” since it nests in cactus plants. The birds are often seen in pairs but can also form into small family groups of up to four birds.

A sedentary, non-migratory species, the Ladder-backed can be viewed year-round in its desert environment. Although it dwells mainly in arid places, it can also be found in the pinelands of Central America, flitting about in a quick, undulating flight pattern. As it soars, the bird flaps its wings rapidly. In flight, the shallow flapping alternates with brief gliding periods.

This species occupies a range of approximately three million square kilometers. Because the current population is estimated at around two million individual birds, it is not considered to be threatened in either range or population; thus, it is classified as of “Least Concern.”  Their population is for the most part stable; however, Texas has experienced some population declines due to habitat destruction.

The Ladder-backed has supplanted (replaced) the closely related Nuttall’s Woodpecker in the drier regions, and in some areas of southern California, the two species have hybridized. There are a sufficient number of regional variations in size and plumage to allow for eight accepted subspecies. 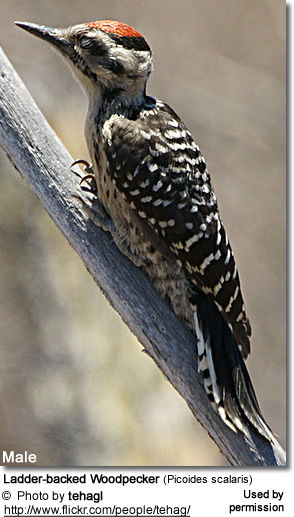 This desert bird has an extensive range. Established in most of Central America, the Ladder-backed Woodpecker is indigenous to Guatemala, El Salvador, Nicaragua, Belize, Mexico, Honduras, and the southwestern United States.

It has been spotted in the southern areas of Nevada and Colorado, and its breeding grounds extend from the southwestern U.S. to British Honduras.

The Ladder-backed Woodpecker is often observed in dry, brushy areas and thickets. Its favorite residences include wooded canyons, cottonwood groves, pine and pine oak woodlands, desert scrub, and desert grasslands dominated by mesquite shrubs and dense cacti. It prefers the dry desert woodlands which support yuccas, agaves, piñon-juniper foothills, and riparian corridors, and it is a frequent visitor to the southwestern towns. The territories claimed by the Ladder-backed and Nuttall's Woodpeckers overlap on the western edge of the California deserts from Inyo and Kern counties south to northwestern Baja, California. Occasionally, it can be seen as a vagrant in the vicinity of Houston, Texas and on the Pacific coast near San Diego, California.

In the U.S., it remains in the desert environments, but in Central America its territories include pine woodland. They adapt well to either habitat: both the very dry climates with brushy deserts and semi-open woodlands. In Mexico, this species frequents pine and oak forests at higher elevations ranging from sea level to 2,600 meters (8530.18 ft) above sea level. 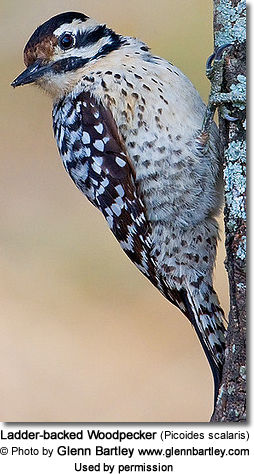 
Described races centrophilus from western Mexico, azelus from southern Mexico, giraudi from east central Mexico, ridgwayi from southeastern Veracruz and percus from Chiapas are not generally recognized as distinct races.

Plumage: Its plumage is predominantly black and white, and the shoulders, back and wings exhibit a barred pattern. The rump, as well as the cream-colored or buff-gray breast, belly and flanks, also have flecks of black throughout. The pale sides display some dark markings as well.

Regional Differences: Birds in the southern areas have bills that have a dusky hint to them; these bills are slightly smaller than those of their northern counterparts.

The males sport red crown patches with black and white speckles interspersed. The Ladder-backed Woodpecker and the Nuttall’s Woodpecker are strikingly alike in their plumage; the main difference is on the head and scapular areas. In those places, the Ladder-backed displays considerably less black coloring. The face is also a buff-gray, as are the nape, rump, and tail. The outer rectrices are barred black and white, and the bill, legs and feet are black. The bill is somewhat pointed, and it is brown or gray-brown at hatching. As the bird reaches maturity, the bill turns a deep red. This species has zygodactile feet and rigid tail feathers which enable it to climb and drill while balancing itself.

The females are smaller, and there is no red on their crowns; however, some display white spots or streaks on their black foreheads and crowns.

The juveniles of both sexes possess red crown plumage, but the area is more narrow than that of the adult male’s. 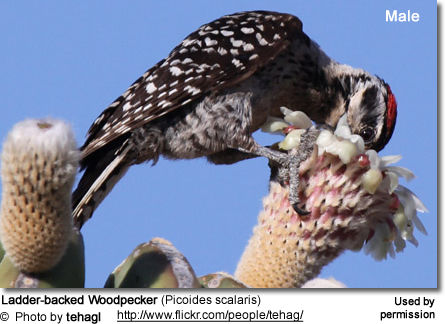 Like most other woodpeckers, the Ladder-backed bores into tree-trunks and limbs with its chisel-like bill, flicking bark about as he searches for insects and their larva. He also feeds on the ground, not just for the arthropods he can locate, but for the cacti fruit which falls to the ground. In addition, he enriches his diet with suet, sunflower seeds, nuts, sugar waters and other fruits.

He doesn’t excavate as much as other woodpeckers do for his food; rather, he probes, taps and pries off bark during foraging. His consumption of wood-boring beetles and other destructive insects aids in the control of insect populations, thus rescuing many trees from disease.

Ladder-backed Woodpeckers nest in the cavities they’ve excavated from tree trunks. The desert birds hollow into the more substantial, succulent cacti, while others will nest in anything large enough to hold the nest hole, including yuccas, agave stalks, dead trees, poles or posts. Choice trees include Joshua, Willow, Walnut, Cottonwood, Oak, Hackberry, Pine, and Mesquite. The cavity is lined with bark chips, and it is usually built in a dead tree or branch 3 to 30 feet above the ground—far lower than other tree-dwelling woodpeckers. The males and females roost in separate cavities.

When the birds reach sexual maturity, around one year of age, they begin seeking their mates. This occurs in late January through March. At some point in April or May, the female lays between 2 and 7 (generally 4-6) solidly white, oval eggs, and both parents feed and rear the young. This monogamous pair will incubate the eggs for 13 days. The chicks will leave the nest 15 or 16 days after hatching, and the parents will continue to care for them another two weeks after that. The average life span of the bird is 4.5 years. 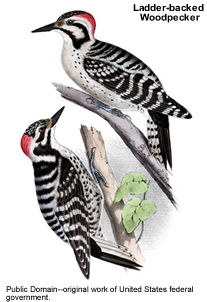 Very little information exists about the breeding and nesting habits of these birds, and so parental care, fledging stage, immature stage, or the break-up of mating pairs remains to be studied. These woodpeckers experience their annual molt after breeding season, usually between July and October.

The Ladder-backed Woodpecker’s call is a repeated, high-pitched "pik.” It is a clear, sharp sound, similar to the Downy’s, but louder and slightly lower in pitch than the Downy’s. The bird-watcher may also hear a slightly descending “jee jee jee” series and a slower “kweek kweek kweek.” Its drum is an uncomplicated roll, similar to the Nuttall’s. 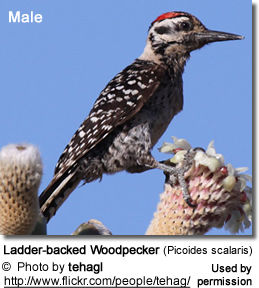