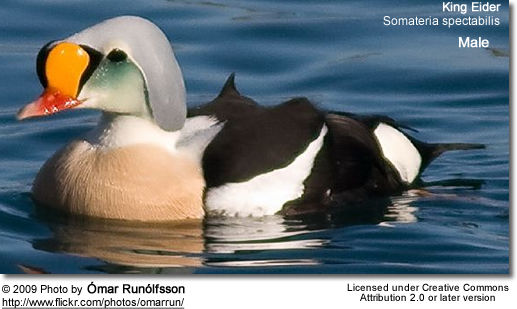 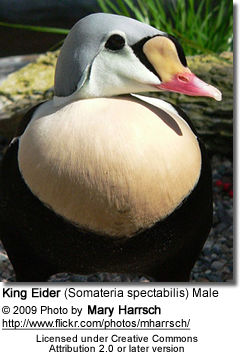 The King Eider (Somateria spectabilis) is a large sea duck, which breeds along northern hemisphere Arctic coasts of northeast Europe, North America and Asia. The birds spend most of the year in coastal marine ecosystems at high latitudes, and migrate to Arctic tundra to breed in June and July.

King Eider winters in arctic and subarctic marine areas, most notably in the Bering Sea, the west coast of Greenland, eastern Canada and northern Norway. It also occurs annually off the northeastern USA, Scotland and Kamchatka. Wintering birds can form large flocks on suitable coastal waters, with some flocks exceeding 100,000 birds.

The King Eider is one of the species to which the Agreement on the Conservation of African-Eurasian Migratory Waterbirds (AEWA) applies.

The nest is built on tundra close to the sea, and 4-7 eggs are laid in a scrape on the ground lined with grass and down.

This species is smaller than Common Eider. 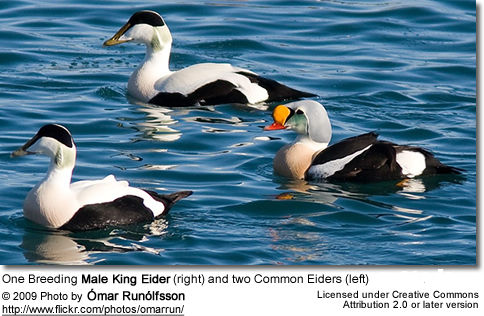 The female (occasionally colloquially referred to a "Queen Eider") is a brown bird, but can still be readily distinguished from all ducks except other eider species on size and structure. The head is shorter than in Common Eider, and the feathering extension onto the bill is rounded, not triangular in shape.

This species dives for benthic invertebrates like crustaceans, polychaete worms, and mollusks, with mussels being a favoured food. 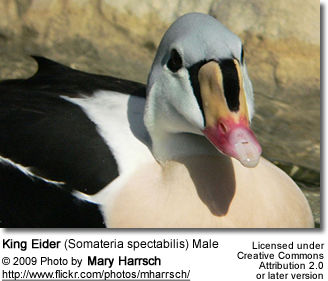 King Eiders dive for crustaceans and mollusks, with mussels being a favored food.