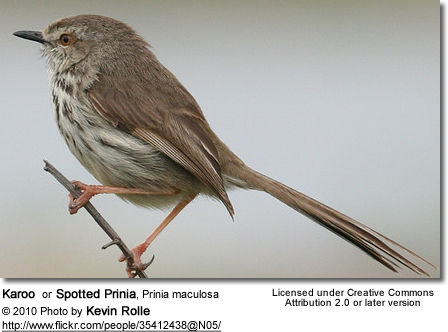 The Karoo Prinia or Spotted Prinia, Prinia maculosa, is a small passerine bird.

This prinia is a southern African endemic resident breeder in Namibia, South Africa, Lesotho, and Swaziland.

It is a species of karoo scrub, fynbos and bracken covered slopes in semi-desert and mountains. The former eastern subspecies P. m. hypoxantha is now usually considered to be a separate species, the Drakensberg Prinia, P. hypoxantha.

The head has a whitish eyebrow and the upperparts are otherwise brown. The throat and lower face are whitish with dark streaking and the rest of the underparts are yellowish white or yellow with distinct black streaking. The long tail has a dark spot near the end and is typically cocked up at an angle. The feet and legs are pinkish-brown, and the eye is dark brown.

The sexes are identical, but juveniles are much yellower below than the adults and less heavily streaked.

The Karoo Prinia can only be confused with the closely related Drakensberg Prinia, but has less yellow underparts with heavier spotting than that species. 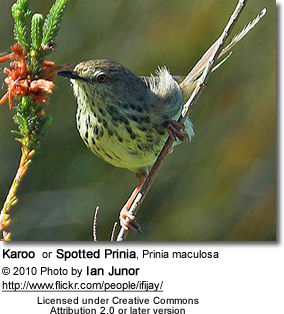 The Karoo Prinia builds a thin-walled oval nest with a side entrance from green grass. It is well hidden deep inside a leafy shrub or bush.

Breeding is from August to September in areas with winter rainfall, but later (up to December) elsewhere.

The Karoo Prinia is usually seen in pairs or small groups, typically low in scrub, but sometimes perching on the top of a bush.

It actively forages for small insects, with tail cocked and frequently swung side-to-side. 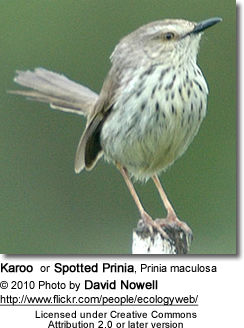 This common species has a large range, with an estimated extent of 670,000 km².