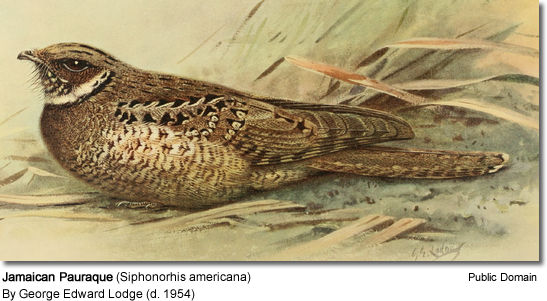 It has not been positively recorded since 1860 and is believed to be extinct. However, rumors of its survival exist and this species has, therefore, been listed as "Critically Endangered" since 2008 (BirdLife International). On the other hand, Ornithology.com and the University of Wisconsin - Steven Points list this species as extinct

The Jamaican Pauraque was formerly considered conspecific (one and the same species) with the Least Pauraque (Siphonorhis brewsteri) with which it probably forms a superspecies. (Superspecies are closely related species with non-overlapping distributions; they are thought to have evolved from the same species).

The Jamaican Pauraque is / was endemic to, as suggested by its name, Jamaica - an island nation situated in the Caribbean Sea south of Cuba.

The last specimen was collected in 1859 in Westmoreland on the south side of the island. Its numbers declined after the introduction of rats and, some suggest, mongooses. However, mongooses were not introduced until 1872 - after the last confirmed record of this species.

Specimens were also taken in the Great Salt Pond area near Spanishtown (1857) and in the Bluefields area, near Savanna-la-Mar in western Jamaica. Evidence suggests this species occurred in the Hellshire Hills area. Recent, unconfirmed reports possibly place the Jamaican Pauraque near the Milk River (south of the island) and St. Catherine located in the south east of Jamaica.

The Jamaican Pauraque was a small, long-tailed nightjar that averaged 9.5 inches (~ 24 cm) in length, including its tail. The plumage was an overall mottled dark brown except for the narrow white chin patch and the reddish-brown hindneck, spotted black and white. Their cryptic appearance blended perfectly into their habitat and they are very difficult to spot during the daytime, when they are usually hidden away sleeping.

Gender ID: The long tail feathers were tipped in white in the male and narrowly buff in the female.

No information is available about its breeding and feeding habits; however, it is likely that the breeding and nesting behavior is / was similar to that of the nightjar family.

The young are covered in down and are capable of short-distance movements within 24 hours of hatching. They usually move apart shortly after hatching, maybe to make it more difficult for predators to spot them. The adults also shove them apart with their feet as they flush from the nest. The male usually stands guard and defends the nest and the young. He will hover in place near the nest with his body in a nearly vertical position and his tail spread showing off his white barring. The parents communicate with their young via soft clucking sounds to which the chicks respond.

If conditions are favorable, the female may produce a second clutch close to the first and while she is incubating the new set of eggs, the male continues to care for the young from first brood.