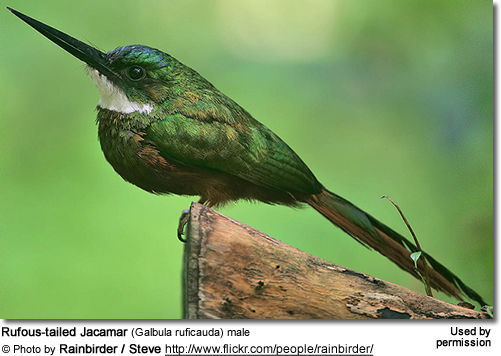 The Jacamars consist of 5 genera and 18 species found in Central and Northern South America.

These small to medium-sized slender perching birds measure between 5.5 inches 13 inches (14 -34 cm) in length and weighing between 0.6 – 2.6 oz (17 – 75 grams.) They have mall feet, rounded wings, and very long bills. Their plumage varies from brightly colored and iridescent to fairly dull.

They mostly feed on insects in flight, but also feed butterflies and moths captured in flight. The Great Jacamar will also feed on lizards and spiders in its diet.

Jacamars usually nest in holes in the ground or in termite mounds in trees, often near water or on the banks of rivers, or near the roots of dead trees. The average clutch consists of 1 and 4 eggs, and both parents share the incubation of the eggs and raising of the young. The hatchlings are covered in down feathers upon hatching.