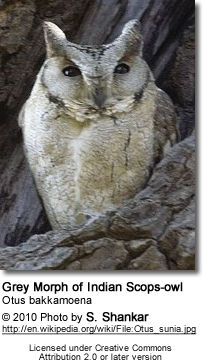 The Indian Scops Owl (Otus bakkamoena) - also known as Collared Scops-owl or Oriental Screech-owl - was formerly grouped with Collared Scops Owl. It is now generally accepted as a distinct and separate species.

These non-migratory owls are found in Pakistan, northern India and the Himalayas east to south China. They are rare residents throughout Japan.

Wooded areas, including mountain and lowland forests, and fields with plenty of trees. 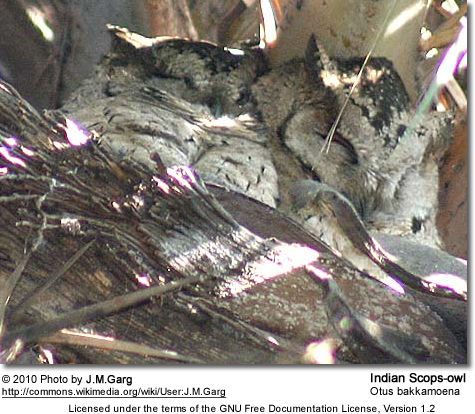 Even though the Indian Scops Owl is one of the largest of the scops owls, it is still relatively small, measuring 9 - 10 inches (23 - 25 cm) in length.

The upper plumage is mostly grey or brown - depending on the morph (genetic mutation) with faint buff spotting. The plumage below is buff with darker streaking. Those occurring in the northern parts have a denser plumage on the shank of the legs. In Japan and China, they even have well-feathered toes.

It has a whitish or buff facial mask, small head tufts (or ears), and a buff neckband.

The eyes are orange or brown.

Due to their camouflaging plumage, these owls blend in perfectly with the scenery. It is difficult to see during the daytime and the opportunity usually only occurs when they are mobbed by smaller birds that are seeking to prevent them from approaching their nests.

Their flight is described as smooth wavelike motions.

One interesting attribute of this species is that when alarmed, it will stand motionless with its ear tufts erect. 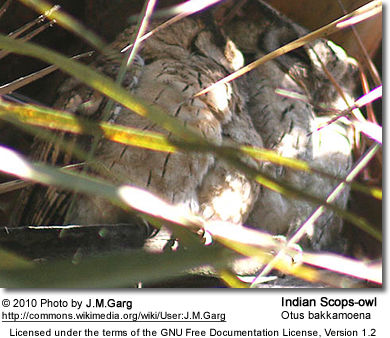 Indian Scope Owls mostly feed on insects caught at night (they are nocturnal - active at night). They will also take rodents, lizards and small birds.

In their northern range, the average clutch consists of 4 - 5 eggs; in their southern range the female only lays 3 - 4 eggs.

The eggs are incubated for about 28 - 29 days. The young fledge about 21 - 25 days later. The parents continue to feed their young for another 3 to 4 weeks until they are fully independent.

The call is a soft, cat-like, mew.