Hummingbirds are rare in North Dakota. Originally, only the Ruby-throated was recorded to occur here, but some other species are now occasionally spotted as well ...

Most reports of these birds stem from the Turtle Mountains, Pembina Hills, forested areas around Devils Lake, the valleys along the Sheyenne and Red Rivers, and to a lesser extent along the Missouri River.

Please let us know if you know of other good locations to spot hummingbirds in North Dakota!

They are most common during the late summer migration in August and during spring migration.

These tiny birds appear to be expanding their territories due to the availability of garden feeders allowing them to find food at those times when natural resources are limited due to climatic conditions. If you happen to see other hummingbirds, please e-mail us!

Ruby-throated Hummingbird (Archilochus colubris) - The most commonly seen hummingbird in North Dakota. More common in the eastern half of the state. Usually arrive between April through June. They leave by mid- or late August through October. Migrating males are usually the first to arrive and the first to depart. The females and the young usually follow about two weeks later. 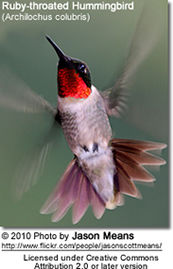 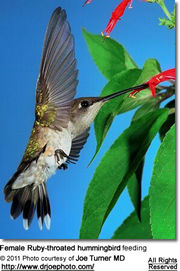 Rufous Hummingbirds (Selasphorus rufus) - Also very common - although not as numerous as the Ruby-throated. Documented in September. 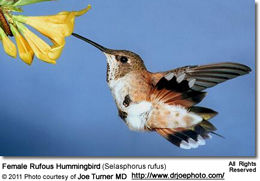 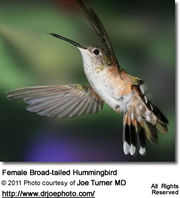 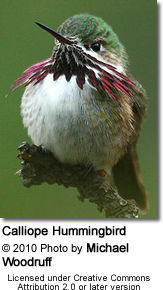 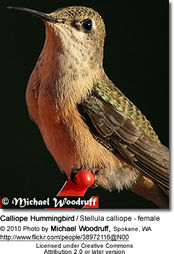 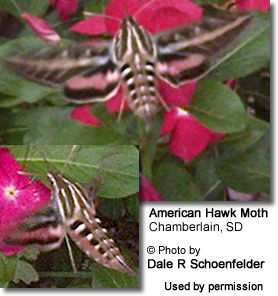 Please note: The Hawk Moth is easily confused with a hummingbird, as they have similar feeding and swift flight patterns. These moths also hover in midair while they feed on nectar.

If you see a bird that doesn't appear to be any of the above, please e-mail comments / images to: webmaster@beautyofbirds.com. Thanks!


Their favorite feeding plants are: