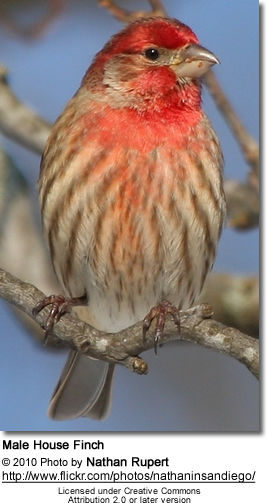 The House Finch (Carpodacus mexicanus) aka Mexican House Finch is a medium-sized finch, averaging 13-14 cm (5-6 in) in length.

Adults have a long brown tail and are a brown or dull-brown color across the back with some shading into deep grey on the wing feathers. Breast and belly feathers may be streaked. In most cases, adult males have a reddish color to their heads, necks and shoulders. This color sometimes extends to the stomach and down the back, between the wings. The male coloration varies in intensity with the seasons and is derived from the berries and fruits in its diet. As a result, the colors range from pale, straw yellow, to bright orange, to deep, intense red.

These birds are mainly permanent residents; some eastern birds migrate south. Their breeding habitat is urban and semi-open areas from southern Canada to Mexico.  A web visitor (Kevin Noonan) from Calgary, Canada advised us that these birds are now seen regularly in Southern Alberta (which is not included on the below map).  He states that they "see on average 10 to 12 house finches over the summer and even two or three over the winter months. We also see quite a few of them in our parks and woodland areas around the city."

Originally only a resident of Mexico and the southwestern United States, they were introduced to eastern North America in the 1940s. The birds were being sold illegally in New York while marketed as the "Hollywood Finch." Many vendors and owners released the birds into the wild in order to avoid prosecution. The released birds spread rapidly and, in some unforested areas, have displaced the native Purple Finch. In 1870, they were introduced into Hawaii.

House Finches forage on the ground or in vegetation. They primarily eat grains, seeds and berries, being voracious consumers of weed seeds such as nettle and dandelion; included are incidental small insects, such as aphids and plant lice. They are frequent visitors to feeders throughout the year, particularly if stocked with sunflower seeds or Nyjer/thistle seed, and will congregate at hanging Nyjer sock feeders. They are considered a pest in fruit orchards.

Nesting House Finches are monogamous, and pairs tend to form while the birds are in their winter flocks. Some pairs may stay together year round.

Nests are made in cavities, including openings in buildings, and also on various kinds of vegetation, sometimes nests abandoned by other birds will be used. Nests may be re-used for subsequent broods or in following years. The nest is built by the female, sometimes in as little as two days. It is well made of twigs and debris, forming a cup shape, usually 1.5m to 2m above the ground. 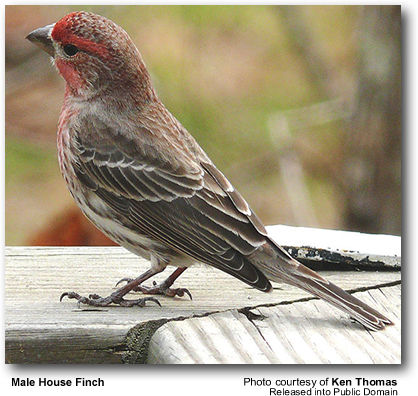 Eggs are laid from February through August, two or more broods per year with 2 to 6 eggs per brood. The eggs are a pale, bluish-green with few black spots and a smooth, somewhat glossy surface. The female incubates the eggs for 12 to 14 days, while the male brings her food.

The female broods the young for the first few days after they hatch, and the male continues to bring food. The female then joins the male in bringing food to the young. The young leave the nest after 12 to 15 days and may be fed by the male for about two more weeks, while the female starts a second clutch. Pairs may raise three or more broods each season.

Dandelion seeds are among the preferred seeds fed to the young.

During courtship, the male may present the female with choice bits of food and, if she imitates the posture of a hungry chick, he may actually feed her. The male may also feed the female during the breeding and incubation period.

House Finches are one of the few birds that are aggressive enough to keep House Sparrows out of their birdhouse and evict them. 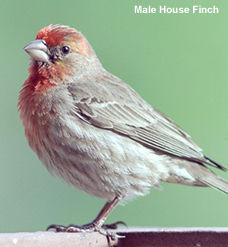 Their song is a rapid, cheery warble or a variety of chirps. A sample of their song can be heard at the USGS site here.

Copyright: Wikipedia. This article is licensed under the GNU Free Documentation License. It uses material from ... Info added by Avianweb