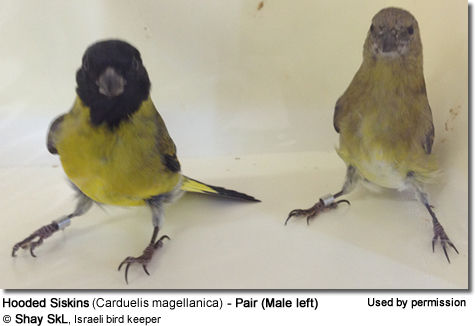 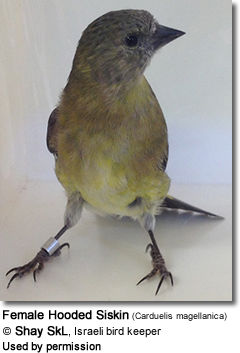 The Hooded Siskins (Carduelis magellanica) are small finches found in South America. They are part of the Neotropical siskin family.

They also occur in the Andean region, from north-west Argentina and northern Chile north to central Colombia.

Isolated populations have been identified in south-east Venezuela, Guyana and the Brazilian state of Roraima.

These birds are mostly resident (non-migratory) with only short local movements in response to availability of food.

Their habitats are woodland areas, savannas, scrubland, farmland, parks and gardens - from sea-level up to about 16,400 feet (~ 5,000 meters).

These gregarious birds are commonly foraging in flocks. 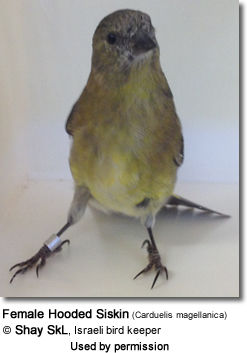 Range: Southwestern Ecuador around the city of Milagros (located in the coastal province of Guayas) south in western Andes to the city of Arequipa in southern Peru.

Range: Western Andes and the foothills of northern Argentina (in the Jujuy Province south to eastern Mendoza).

Range: Central Andes in the Jujuy Province located in the extreme northwest of the Argentina, at the borders with Chile and Bolivia.

Hooded Siskins measure 4.7 - 5.5 inches ( 12 - 14 cm) in length; with subtle size differences between the subspecies and genders.

Males can easily be identified by their black head and females by their green-yellow head with little grey markings, which are more pronounced in juvenile females than in adult females. Older females have a more yellowish head.

Like Goldfinches, they have long yellow wing bars. The rest of the wings and the tail are black with green markings. The body is yellowish green from the neck down to the belly, and the belly tends to be yellow. 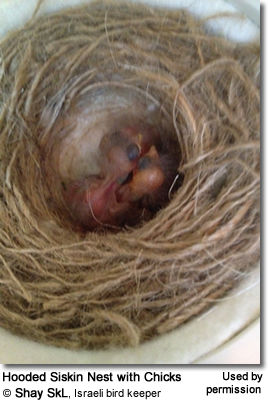 In the wild, they breed in thick trees or bushes. They usually keep a distance from 10 - 15 meters between nests. Pairs will increase the amount of insects during this time and also feed mostly green seeds with high nutritional values until the youngsters fledge (leave the nest).

The eggs are incubated for about 13 days and in most cases starts after the third egg has been laid.

These finches usually start to breed in the late spring or early summer. During this time the breeder should offer more fatty seed and a wild seed mixture, as well as live small insects, such as buffalo worms, mini mealworms and pin head crickets, if available. Additionally, fresh green leaves, vegetables and spray millet should be part of their daily feeding.

Covering the nests and nesting areas will encourage these shy birds to breed.

A suitable nest would be a domed plastic canary nest with coconut fiber mixed with jute and small raw cotton balls for nesting material. 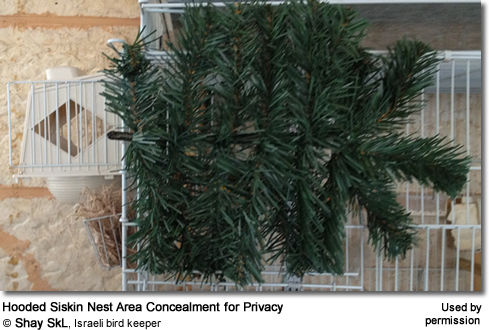 Groups of siskins are often seen visiting cultivated areas and pastures to feed on grain. They will also readily take advantage of bird feeders.

They also take insects (mainly beetles). In particular during the breeding season when raising chicks, the protein from insects is important to support the chick's rapid growth.

They have also been observed to eat soil-like substances, such as clay, which may serve as a chelation agent to bind some toxins (such as heavy metals) and / or offer valuable nutrients.

"I feed them mainly high quality canary food adding about 10% wild seed, small amounts of Niger seeds, white perilla seeds and grass seeds. In winter, I increase the amount of fatty seed to this mixture.

Their pleasing songs consist of long smooth and rapid twitters and trills, and sometimes consists of imitations of other birds. They sing throughout the year and often in groups.

Captive birds can expect to live 11 - 14 years - provided they are well cared for and don't become victims of accidents.

Wild individuals only live 2 - 3 years, mostly due to predation of their eggs, young and adults by reptiles (i.e., snakes), birds of prey and small mammals. They also succumb to harsh environmental conditions.