The Hoatzin (Opisthocomus hoazin), also known as the Hoactzin, Stinkbird, or Canje "Pheasant", is an unusual species of tropical bird found in swamps, riverine forest and mangrove of the Amazon and the Orinoco delta in South America.

It is the only member of the genus Opisthocomus (Ancient Greek: wearing long hair behind, referring to its large crest), which in turn is the only extant genus in the family Opisthocomidae.

The taxonomic position of this family has been greatly debated, and is still far from clear. 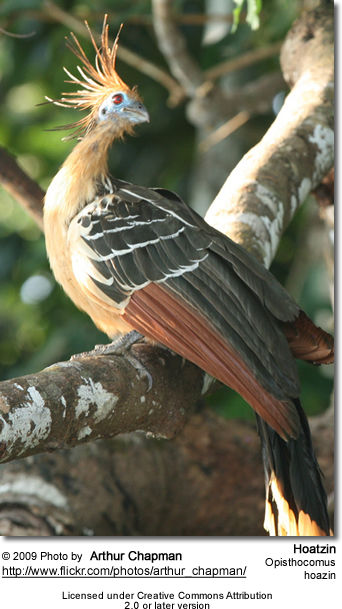 Consume a wide variety of plant material, including leaves and fruit, and has an unusual digestive system with an enlarged crop which functions as a rumen.

The Hoatzin is pheasant-sized, with a total length of 65 cm (25 in), and has a long neck and small head.

It has an unfeathered blue face with maroon eyes, and its head is topped by a spiky, rufous crest. The long sooty-brown tail is broadly tipped buff. The upperparts are dark sooty-brown edged buff on the wing coverts, and streaked buff on the mantle and nape. The underparts are buff, while the crissum, primaries (longest wing feathers), underwing coverts and flanks are rich rufous-chestnut, but this is mainly visible when it opens its wings.

The alternative name of "stinkbird" is derived from the bird's manure-like odour, caused by their digestive system.

This is a noisy species, with a variety of hoarse calls, one of which has been described as like a heavy smoker's . 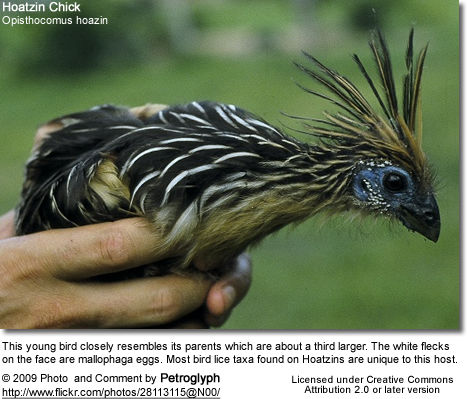 The Hoatzin eats the leaves and to a lesser degree fruits of the plants which grow in the marshy and riverine habitats where it lives. It clambers around clumsily among the branches, and being quite tame (though they become stressed by frequent visits), often allows close approach and is reluctant to flush. The Hoatzin uses a leathery bump on the bottom of its crop to help balance itself on the branches.

One of this species' many peculiarities is that it has a digestive system unique amongst birds. Hoatzins use bacterial fermentation in the front part of the gut to break down the vegetable material they consume, much like cattle and other ruminants. Unlike ruminants, however, which possess the rumen - a specialized stomach for bacterial fermentation -, in the Hoatzin this is the function of the crop, an enlargement of the esophagus. The crop of the Hoatzin is so large as to displace the flight muscles and keel of the sternum, much to the detriment of their flight capacity. Because of aromatic compounds in the leaves they consume and the bacterial fermentation, the bird has a disagreeable, manure-like odor and is only hunted for food in times of dire need.

Hoatzins are gregarious and nest in small colonies, laying 2-3 eggs in a stick nest in a tree overhanging water in seasonally flooded forests.

The chick, which is fed on regurgitated fermented food, has another odd feature; it has two claws on each wing. When disturbed, the chicks drop into the water to escape predation, then use their clawed wings to climb back to the safety of the nest. This has inevitably led to comparisons to the fossil Archaeopteryx, but the characteristic is rather an autapomorphy, possibly caused by an atavism towards the dinosaurian finger claws, the developmental genetics "blueprint" which presumably is still present in the avian genome. 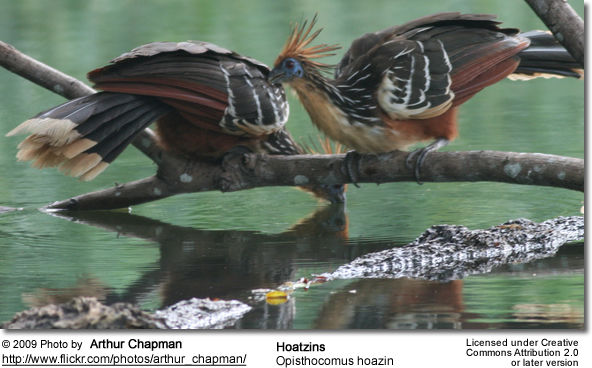 Though conspicuous, even attractive, at close range due to its bizarre shape and striking colors, unwary and a poor flier, it is not considered endangered. In fact, its survival seems to be more assured than that of many other endemics of its range. In Brazil, tribal people sometimes collect the eggs for food, and the adults are occasionally hunted, but in general this is rare, as it has - or at least is reputed to have - a bad taste. While its preferred habitats, mangrove and riverine forest, are disappearing fast in some regions, it is less threatened than terra firme forest, which is the primary target for deforestation in the Amazon. The Hoatzin therefore remains fairly common in a large part of its range.