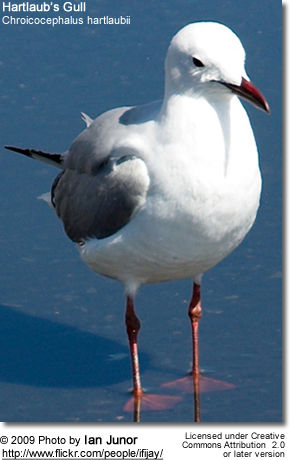 The Hartlaub's Gull or King Gull, (Chroicocephalus hartlaubii) is a small gull - its name commemorates the German physician and zoologist, Gustav Hartlaub.

This is a non-migratory breeding resident endemic to the Atlantic Ocean coastline of South Africa and Namibia. Although it is predominantly coastal or estuarine, it is not a pelagic species, and is rarely seen at sea far from land. It was formerly sometimes considered to be a subspecies of the Silver Gull (C. novaehollandiae), and, as is the case with many gulls, it has traditionally been placed in the genus Larus.

About one half of the total population, currently estimated at about 30 000 birds, are within the Greater Cape Town area. It breeds in large colonies, and the main traditional breeding colony for the Cape Town area is on Robben Island. The adults fly to the mainland to find food for their chicks, a round trip of about 24 km.

Hartlaub's Gull has accommodated well to humans, and can become very tame around habitations.

Although it is a relatively rare species, about the tenth rarest of the world's 50 or so gull species, it is common in its range and is widely regarded in Cape Town as a nuisance, fouling buildings and bathing in urban ponds. It has, at times, been a hazard to aircraft near airports.

Like most gulls, it is highly gregarious in winter, both when feeding or in evening roosts. 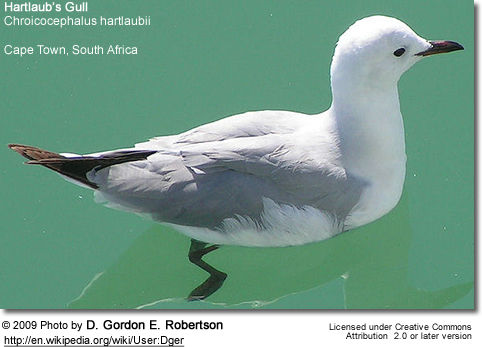 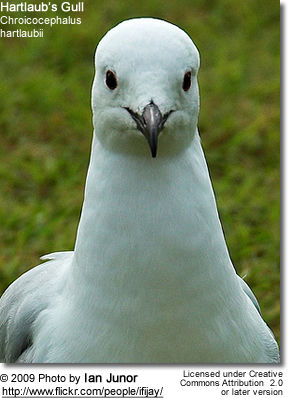 It is a mainly white gull with a grey back and upperwings, black wingtips with conspicuous white "mirrors", and a dark red bill and legs. When breeding it has a very faint lavender grey hood, but otherwise has a plain white head.

The Hartlaub's Gull takes two years to reach maturity. Juvenile birds have a brown band across the wings.

Similar Species: They differ from same-age Grey-headed Gulls in that they lack a black terminal tail band, less dark areas in the wings, darker legs, and a white head.

It is an omnivore like most Larus gulls, and they will scavenge at tips and feed on scraps as well as seeking suitable small prey, often by wading in shallow water. 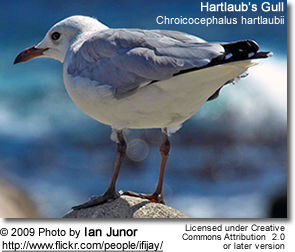 This is a noisy species, especially at colonies. The call is a raucous crow-like kaaarrh. This species is frequently the subject of complaints about the noise it makes in urban areas. 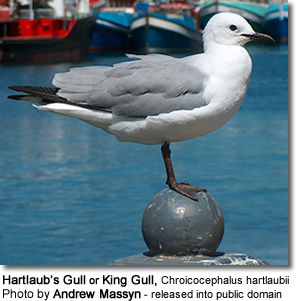 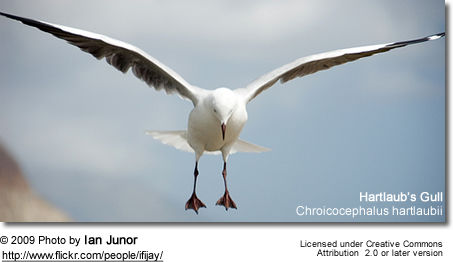