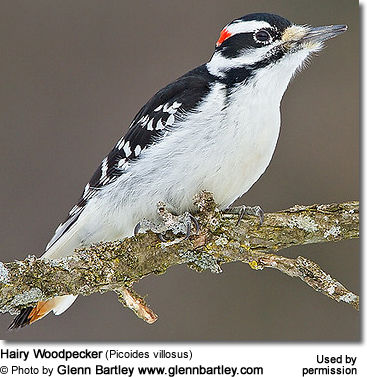 The Hairy Woodpecker (Picoides villosus) is a woodpecker found in Northern and Central America.

A cousin of the Downy Woodpecker, the Hairy Woodpecker lives quite a similar lifestyle to the Downy. The two co-exist well, in spite of shared ranges and the larger size of the Hairy—a third again as large as the Downy. These two species are not closely related, however, and are likely to be separated eventually into different genera.

An impressive, beautifully marked bird, the Hairy is easily identified by his bill, size and voice. With an estimated population in 2003 of over nine million individuals, the Hairy Woodpecker is listed by the International Union for Conservation of Nature (IUCN) as a species of “Least Concern” in North America. The Hairy and its 14 recognized subspecies are mostly permanent residents, although in the winter, birds whose territories are in the extreme north may migrate further south, and birds in higher elevations, such as in mountainous areas, often move to lower elevations.

The status and distribution of the Hairy Woodpecker and its subspecies vary considerably. In most places, they are common, but in areas such as the southern U.S., particularly Florida, they have become scarce. Population declines that have been recorded in many areas are thought to be due to fragmentation of forests, loss of old-growth trees, and nest site competition with European starlings .Hopefully, since the Hairy is the most prolific woodpecker in North America, its numbers will grow in spite of this.

Unfortunately, birders in Europe are confronted with the same problem: forests that, for over a thousand years, have been slashed to provide firewood and turned into human dwellings, parks, ships and other structures. Stands of dead trees are rare in most of Western Europe, and birds that depend on them are scarce. Western Europe’s desire for “clean” habitats has decimated many wildlife populations. In contrast, the northeastern sections of North America are experiencing a century-long recovery of their forested regions. The number of beavers, which help supply so much fodder for the woodpeckers, is increasing as well. 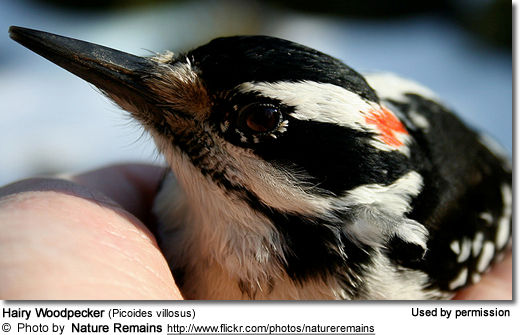 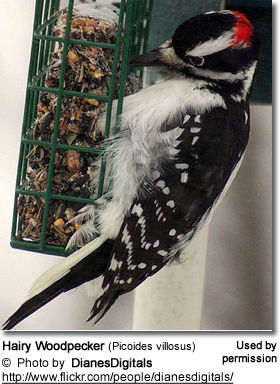 Hairy Woodpeckers can be heard tapping and singing their evening calls in much of North America, particularly in the northeastern woodlands and rural areas throughout the country. Since its territories are immense, it makes use of a many different classifications of woodlands. In upstate New York, the birds are not only frequently seen, their numbers are increasing due to the many forested areas and availability of dead trees. This resident species can be found from Alaska, across Canada, and southward throughout the U.S. to the Gulf of Mexico. In addition, his territories include the Bahamas, Canada, Costa Rica, El Salvador, Guatemala, Honduras, Mexico, Nicaragua, Panama, Puerto Rico, Saint Pierre and Miquelon, Turks and Caicos Islands.

The Hairy Woodpecker makes its home in both the wide-ranging, mature deciduous and coniferous forests and in the more isolated regions of North America. They can be spotted in woodlots, suburbs, parks, cemeteries, forest edges, open woodlands of oak and pine, recently burned forests, and stands infested by bark beetles. They occupy the wooded areas from sea level to tree line—as far up as trees can grow. Landscapes devoid of dead or dying trees with their decomposing wood will be unable to host the variety of wildlife they once held. If left alone, however, woodlands containing decaying trees will bring about the return of many species into the neighborhoods, creating untold future generations of propagating flora and fauna.

Individual Hairy Woodpeckers are known to travel long distances, taking advantage of irruptive insect infestations whenever possible. They are known to travel to the southern plains and Pacific coast lowlands during cold weather; these habitats are quite far-removed from their breeding grounds. 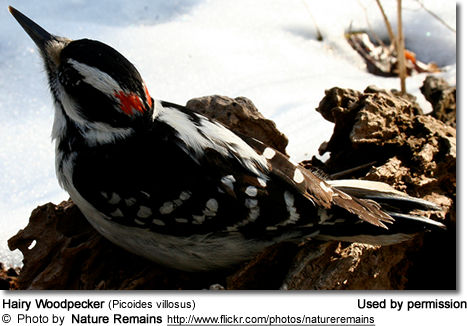 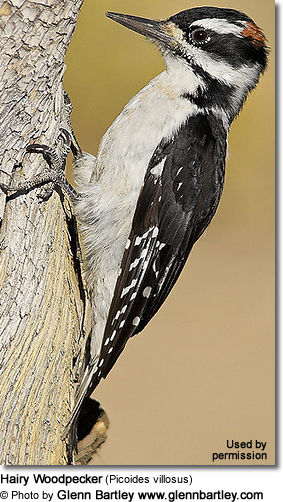 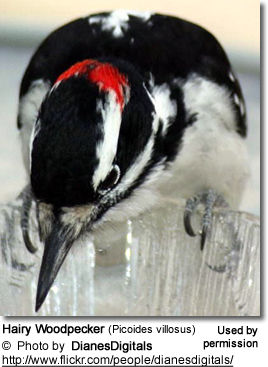 Races that are not generally accepted as valid ... 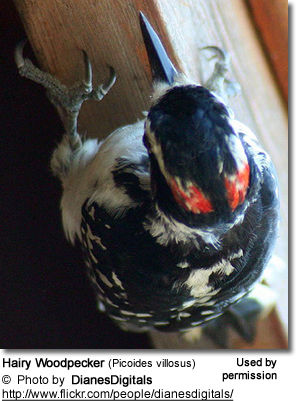 Although the Hairy Woodpecker’s plumage is very similar to the Downy’s, the two species can be easily differentiated.

The plumage is a study in contrast between black and white. The black wings are barred with white, and there are white facial stripes. White superciliary lines streak behind the head from above and below the eyes. The males possess either a single red patch or two, smaller red patches, one behind the other, on the crown. The black back is highlighted with a broad white streak down the center. The Hairy’s bill is nearly as long as his head, and his full, dull orange cere tufts make him highly identifiable, even from a distance. The nasal bristles under those tufts are small and inconspicuous. The off-white to light grey underparts lead back to black rectrices displaying outer tail feathers that are edged in white. The Hairy Woodpecker stands tall, his back straight and his long tail feathers stiff for leaning against the tree trunks. The zygodactyl feet provide a powerful grip on the bark.

The adult female’s bill is the same as the male’s, and her tail, back, and wings are similar as well. She lacks both the male’s red crown patch and his black and white barring on her tail; in addition, she displays fewer spots on her upper wing.

Juvenile males sport lesser, light red or orange-red tufts of feathers on their crowns and foreheads instead of the adult male’s fully feathered red crown patch. Other than that, they resemble the adult. There are noted differences in the plumage of the juveniles of the various subspecies: Birds inhabiting the Queen Charlotte Islands display barred outer tail feathers, while in the Maritime Provinces, the youngsters have barred backs and flanks. In the Pacific Northwest, the racial variation is in the color—brown instead of black. And in Newfoundland, the populations display barred backs; this occurs mostly in the juveniles, but some adults exhibit this feature as well.

Remarkably, both the Downy and the Hairy Woodpeckers display the same kinds of variations in their plumage, depending on the regions they inhabit. Northern birds tend to be larger than their southern counterparts. East of the Rockies, the birds have white underparts, and the wings are considerably more spotted. Western birds have much less spotting on the wings and narrower facial stripes. Birds of the Pacific Northwest possess plumage that is coffee-brown to black rather than white and black. Hairy Woodpeckers living in the northwest areas, particularly in western Washington, display darker plumage than those which dwell in eastern Washington. In the Eastern race, most of their lighter-colored feathers are viewed as more of a pale tan than white. The Hairy Woodpecker is a widespread generalist, able to survive in a wide variety of habitats. They relish a great assortment of foods: serviceberries, juneberries, cherries, and plums from their respective trees, berries and acorns from ornamental and fruit-bearing oaks (these are thin-shelled nuts in scaly caps). The acorn-bearing oaks are much sought after since they provide the birds with food, shelter and nesting sites. If the homeowner is lucky, the Hairy will clear his yard of harmful beetles and other wood-boring insect pests, their larvae and grubs; they consume huge numbers of these pests, especially in the winter months.

Often seen foraging in pairs among the trunks and main branches of the mature trees, the Hairy and Downy co-exist by choosing different trees and separate locations and altitudes in the same trees. They devour ants, aphids, beetles, larvae and other destructive insects. Prey that is unavailable to the Downy is quickly discovered by the Hairy who, with his longer bill and stronger, barbed tongue, is able to work more deeply into the bark.

Hairy Woodpeckers hitch up tree trunks and along main branches when foraging; they also feed at the bases of trees, along fallen logs, and even on the ground at times. These birds explore the surface by turning over bark or excavating into the tree to uncover insects. Although insects provide the bulk of their foodstuffs, they also enjoy fruits, berries, and occasionally, tree sap—even poison ivy! They are notorious for pecking at wooden window frames and wood-sided homes that may harbor bugs, much to the owner’s chagrin.

If you know a hunter who butchers his own deer, ask him to save the rib cage or some leg bones. Hang one or the other from a tree limb when winter starts, and you’ll be surprised at the number of woodpeckers that will come in for this treat! They will work it over for the attached meat and fat. Just replace it when the birds have stripped it.

The bird-lover can attract Hairy Woodpeckers by planting these trees, plants and bushes: oak, walnut, sunflower, mulberry, serviceberry, apple, and chokecherry. In addition, they will consume these foods placed in feeders: suet, seeds, acorns, corn, walnuts, peanuts and sunflower seeds. These feeders will be a most welcomed find for the woodpeckers. Place the shelled nuts in a basket or feeder that they can cling to. All the birds will appreciate the high-fat nuts in the winter, and you’ll keep them coming to your yard year-round if you keep the feeders filled throughout the other seasons. Remember, suet is animal fat and will turn rancid in the warmer months, so only feed it in the late fall through early spring. During the summer months, you can put out a gelatin-based seed cake which will not harm the birds. Check places that sell suet to see if they also carry these cakes.

If you have dead trees in your yard, or living trees with dead branches, and if it’s safe to allow them to remain, a mating pair of Hairy Woodpeckers might choose your tree in which to raise a family. In later seasons, their holes could easily become a home for wrens, chickadees, nuthatches, bluebirds, or flying squirrels. The back yard bird-watcher will reap the rewards of having fed them when he catches sight of them flitting from feeder to tree in their beautifully slow, undulating flight pattern. 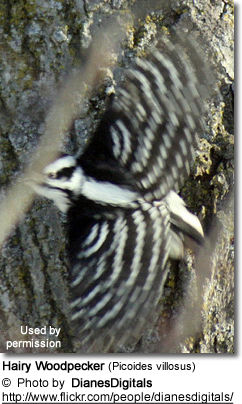 The Hairy Woodpecker excavates his nest in tree trunks or large branches; they dig these cavities to a depth of 10-12 inches. Using their sturdy bills, both male and female hammer the hole into the tree from 5 to 40 feet above the ground.

The female will lay 3-6 white eggs and incubate them by day, while the male takes over the night duties. Between 11 and 15 days, the young hatch, and for another 28-30 days, the conscientious parents feed them almost round the clock, nearly exhausting themselves in their effort. Note the longer nestling period—the Hairy is a larger woodpecker, so it takes longer for the demanding youngsters to grow sufficiently to be able to leave the nest and live on their own.
They will produce only one brood per season.

This shy, reclusive bird can be heard whinnying and drumming in woodlots, parks, and forests
The Hairy’s call is usually distinguishable from the Downy’s since it is louder than the Downy’s and sounds more like a sharp “peek” or “pee-ik” than the Downy’s softer “pik.” Its rattle call is often termed a “whinny;” it is a series of rapidly descending “peek” calls. His drumming or hammering is just as quick, numbering about 25 strikes per second!