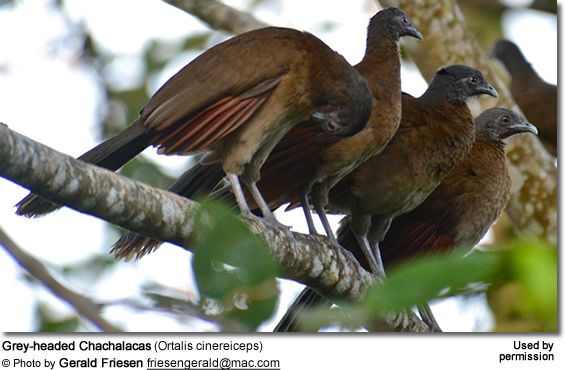 The Grey-headed Chachalacas (Ortalis cinereiceps) are turkey-like birds found in Latin America that were named for their most distinctive characteristic - their grey heads. They are related to the Australasian megapodes (also known as incubator birds or mound-builders).

They were formerly lumped together with the similar Chestnut-winged Chachalaca (Ortalis garrula) with whom they are thought to hybridize. However, based on differences in voice and plumage details, and the fact that these two species are separated by dense forests that are deemed to be unsuitable habitat for these birds - these races were split.

The Grey-headed Chachalacas occur naturally in the low and middle elevations on the Caribbean and southern Pacific slopes. Specifically, their range stretches from eastern Honduras south through eastern and central Nicaragua, Costa Rica (except the drier northwestern parts), Panama (including the Isla del Rey -parts of the Pearl Island), to the adjacent northwestern Colombia, where they are found from South Chocó to the upper Atrato River). They are most common at elevations of about 3610 feet or 1100 m.

They usually remain in the canopy of trees - at a height of 3.3 - 10 feet (1 - 3 meters). They are found walking along tree branches in woodland areas, thickets, around clearings, and along water ways.

These social birds are often seen in family groups of 6 to 12.

The below subspecies are proposed on the basis of slight color differences, but these races are generally considered Invalid

The head is dark grey and the bare throat patch is reddish. The plumage is mostly olive to dark brown, paler below. The blackish tail is tipped with pale grey-brown. The wing tips are rufous (reddish-brown).

They resemble the Plain Chachalaca (Ortalis vetula) found in northern Costa Rica; however, that species is larger and more rufous-colored below. Its tail tip is white and it lacks the reddish-brown wing tips.

The Grey-headed Chachalacas feed on fruits and berries.

The average clutch consists of 3 - 4 large, rough-shelled white eggs. The eggs are usually incubated by the female alone.

Grey-headed Chachalacas tend to be less vocal than their relatives, the Plain or Rufous-vented Chachalacas; and they don't share their typical chachalaca calls. Their contact calls are described as peeping "white, white, white" and raucous kraaak vocalizations.