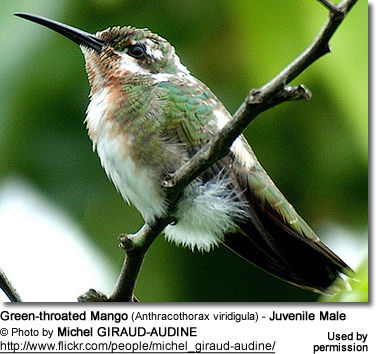 Its natural range includes northeastern Venezuela, Trinidad and the Guianas south to northeastern Brazil. It is a local or seasonal migrant.

In Brazil, they are only found on the narrow Atlantic coastal strip north and south of the Amazon River outlet, and a strip along the river proper, about 1500km upstream. 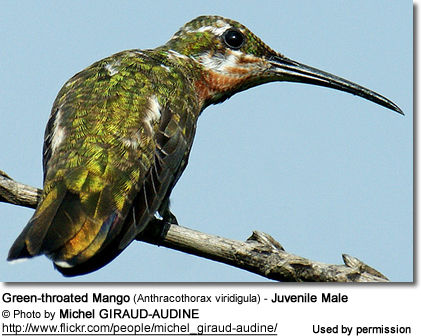 The male's upper plumage is glossy bright green with a copper tinge, especially on the lower back. His throat and under plumage are green with a black central line on the chest and abdomen. His tail has dark central feathers, the outer tail being wine-red tipped with black.

The female has more bronze on the upper plumage and sides. She is mostly white below with a black central stripe. The central feathers of her tail are dark; except the outer tail is wine-red tipped with white.

Juveniles look like females, except they have chestnut-colored sides.

Similar Species: They resemble the closely related Black-throated Mango. Except the male Green-throated has less extensive black on the under plumage. This is sometimes difficult to confirm in the field, as birds may appear all black under certain lighting conditions. The females of the two species look very much alike - except the Green-throated has more extensively coppery under plumage than the Black-throated female. 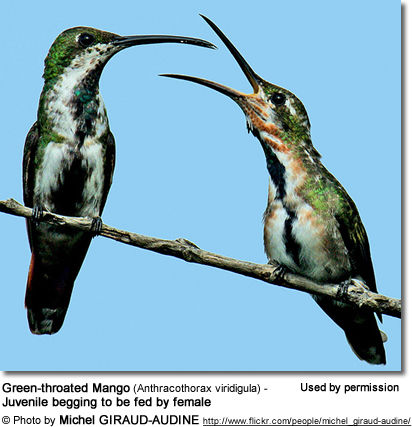 The female Green-throated Mango is responsible for building the deep, cup-shaped nest out of plant fibers woven together and green moss on the outside for camouflage in a protected location in a shrub, bush or tree. She lines the nest with soft plant fibers, animal hair and feather down, and strengthens the structure with spider webbing and other sticky material, giving it an elastic quality to allow it to stretch to double its size as the chicks grow and need more room. The nest is typically found on a low, thin horizontal branch. 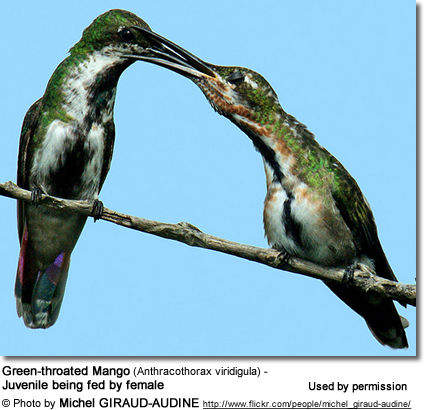 The Green-throated Mangos primarily feed on nectar taken from a variety of brightly colored, scented small flowers of trees, herbs, shrubs and epiphytes. They favor flowers with the highest sugar content (often red-colored and tubular-shaped) and seek out, and aggressively protect, those areas containing flowers with high energy nectar.They use their long, extendible, straw-like tongues to retrieve the nectar while hovering with their tails cocked upward as they are licking at the nectar up to 13 times per second. Sometimes they may be seen hanging on the flower while feeding.

The Green-throated Mango's call is described as a a staccato stony click. 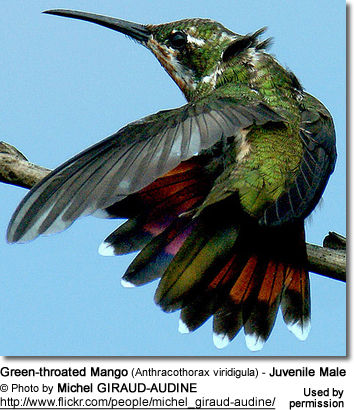