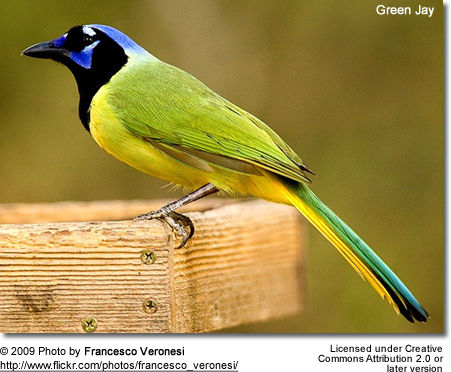 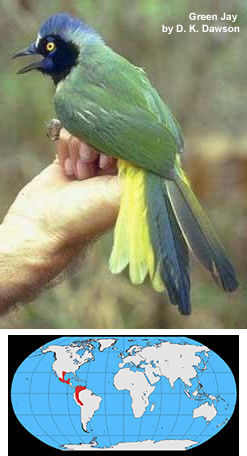 The Green Jay (Cyanocorax yncas), a bird-species of the New World (Americas) jays, exhibits distinct regional forms within its large but discontinuous range. This stretches from southern Texas south into Mexico and Central America, with a break before the species reappears in a broad sweep across the north of the South American continent in Colombia and Venezuela.

Green jays have feathers of yellowish-white with blue tips on the top of the head, cheeks and nape, though some forms have more blue than others. The breast and underparts have a bright yellow hue, fading to cream in worn plumage. The upper parts of this bird appear rich green.

The birds have especially large nasal bristles that form a distinct crest in some of the geogaphical forms, but have developed less in others. A black bib forms a thick band up to the sides of the head as well as a stripe through the eye line and one above it.

Green jays feed on a wide range of insects and other invertebrates, as well as on acorns and various cereal grains.

They take ebony seeds where these occur, and also any oak species' acorns, as this jay will readily store them for hard times. Meat and human scraps add to the diet when opportunity arises. 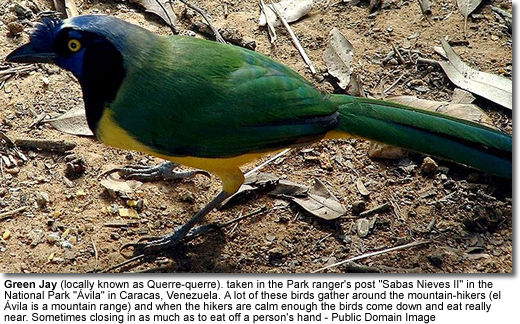 Green jays usually build a nest in a tree or in a thorny bush or thicket. Their nests are constructed of thorny twigs and sticks and lined with roots, stems, moss, dry leaves and other available plant matter.

As with most of the typical jays, this species has a very extensive voice repertoire. The bird's most common call makes a rassh-rassh-rassh sound, but many other unusual notes also occur. One of the most distinctive calls sounds like an alarm bell.