The Great Horned Owls (Bubo virginianus) are the largest owls found in the Americas and the second-heaviest in North America, second only to the related Snowy Owls (Bubo scandiacus).

They are the most widely distributed owl species in North America - with a range that stretches from the Arctic tundra in the north south through the entire American continent.

These large, night-hunting owls stand up to 2 feet (~70 cm) tall and have a wingspan of over four feet (120 cm). They are perfectly camouflaged in the woods by their brown, white, grey and black markings that resemble the bark of trees.

Other than their large size, they are most easily recognized by the tufts of feathers on their heads that look like horns, for which they were named.

In North America, they are also known as ...

The Great Horned Owls occur in western and central Alaska and central Yukon east to Labrador and Newfoundland.

Their range stretches through the entire United States and Mexico, and most of Central and South America to the island group of Tierra del Fuego off the southernmost tip of the South American mainland.

They have adapted well to just about any possible habitats and climates - from all types of forests, mountains, deserts, subarctic tundra, rocky coasts or canyons, mangrove swamps, agricultural areas and lightly populated rural regions. However, they are either absent or less common in the more extreme areas, such as mountains above tree lines, high Arctic tundra, the heart of deserts and very dense rainforests.

In general, these solitary owls prefer open habitats that are suitable hunting grounds and areas with less human activities. Although they need some wooded areas for roosting and nesting.

Mated pairs generally are resident (non-migratory), except for some southward migration in response to severe winter conditions (mostly occurring amongst populations found in the northern parts of their range).

However, younger or unpaired birds will wander widely (over 150 miles or 250 km) as they search for their own territories and mates. 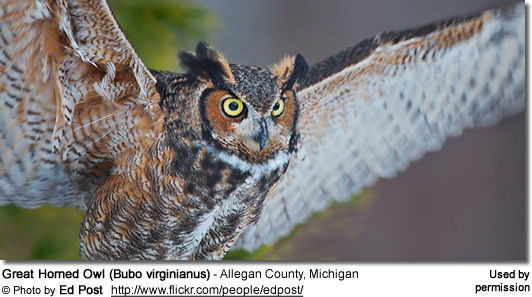 Depending on the subspecies, Great Horned Owls can have a plumage that is nearly white to pale, reddish to dark brown, grey, with grey / brown / black camouflage pattern on the upper plumage; a variable-sized white throat patch, and dense mottling on the chest and fine barring on the abdomen.

Depending on the species, the facial disk can be reddish, orange-brown, pale brown, brown, or greyish in color. 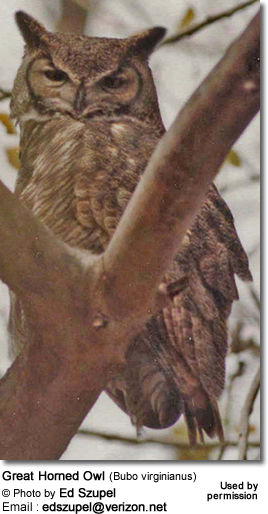 Large, bulky, barrel-shaped owl with broad wings, and distinctive ear tufts that are widely spaced on the large head that lay flat in flight.

The legs and the large and powerful feet and talons (claws) are feathered to the ends of the talons, with some black skin peeking out from around the talons.

They have short, dark bills and large, staring and glowing yellow-orange eyes (one South American race has amber / dark eyes).

Females are a little larger than males, but otherwise look identical. Males tend to have deeper voices.

Juveniles resemble the adults. Recently fledged birds still have some down around the head and lack the adults' ear tufts.

Their large size, prominent ear-tufts and barred plumage separates these owls from others through much of their natural range .There are only a few owl species that the Great Horned Owls could be confused with ...

Great Horned Owls are powerful night hunters that are able to take prey two to three times heavier than themselves.

Small mammals, such as mice, rats, rabbits, hares, squirrels, raccoons, armadillos, porcupines, shrews, moles, muskrats, bats and even domestic cats and small or young dogs. Furthermore, this is the only animal known to regularly eat skunks.

Birds up to the size of geese, including all other owls (except for the larger Snowy Owls), other bird of prey (such as Red-tailed Hawks, Peregrine Falcons and osprey nestlings), ducks / geese, domestic chicken, quail, grouse, turkeys, pigeons, woodpeckers, crows, bitterns, herons, ducks, swans and gulls. Other birds regularly mob these owls angrily as they attempt to keep them away from their nests. Particularly the American Crows will join together in flocks to harass these owls (the main predators of both adults crows and young) hoping for these predators to fly off.

To a lesser extent, they take frogs, toads, fish and young alligators, found in (or near) shallow waters, as well as snakes, turtles, lizards and salamanders.

Most hunting is done at night, although sometimes they will pursue their prey also at dusk to late evening, at dawn or even during the day. They usually hunt from a perch or gliding slowly above the ground, watching the grounds below them for suitable prey. Once spotted, they will pounce on them usually killing them instantly as they grasp them with their sharp claws. As a result of their soft, loosely-packed feathers and stiff feathering of their wings, their flight is silent, allowing them to sneak up on their unsuspecting prey. 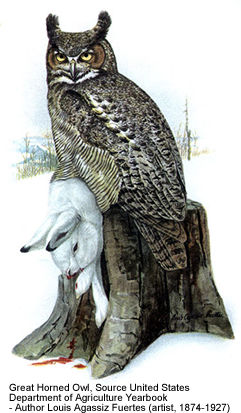 They may also walk on the ground to capture small prey or wade into water to catch frogs and fish.

They eat small prey (such as mice and small rabbits) whole. Larger prey are usually carried off and ripped into smaller, bite-sized pieces and eaten at a preferred feeding site (perch or nest). Bird prey is usually plucked first and wing tips and legs torn off to be discarded.

Those occurring in northern parts of their range may leave any uneaten food to freeze and when ready to proceed with the meal, will unfreeze it later with their own body heat.

Any undigested parts, such as bones and fur, are regurgitated (thrown up) as pellets about 6 to 10 hours after eating. These compact pellets are usually dark greyish-black in color and about 3 - 4 inches (7.6 - 10.2 cm) long and 1.5 inches (3.8 cm) thick. Larger bone pieces, such as skulls are regurgitated whole.

These pellets can often be found under their favorite feeding perches and are often the first indication of their presence. 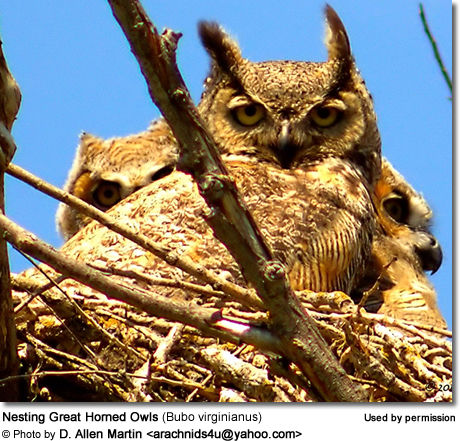 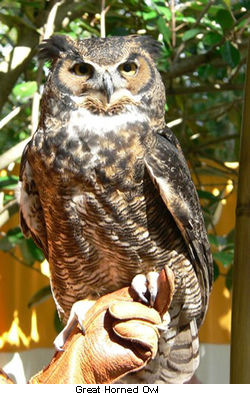 Great Horned Owls reach reproductive age when they are about two years old.

The breeding season varies by location; in North America, most nesting occurs between January through May. In the more tropical climates, they may nest throughout the year.

Pairs usually start forming as early as October to December. Males will choose nesting sites and then seek to attract the attention of females by hooting emphatically while leaning over (with the tail folded back) and puffing up his white throat until it resembles the shape of a ball. Interested females may hoot back, but in a more subdued manner. Males will draw the attention of females to their chosen nest sites, by flying and stomping on them.

As pairs are starting to form, they jointly perform mating duets as part of their courtship and pair bonding. They will bow to each other with drooped wings. They will be observed rubbing each other's' bills and preening each other.

Even though owls are monogamous and they often breed together year-after-year, their relationships are continued more loosely once their young have reached independence. They are usually seen alone until they get back together again for the next breeding season.

Great Horned Owls don't usually construct their own nests, but are more likely to take over abandoned nests of some other large birds, such as the nests of crows or ravens, hawks or large squirrels; or they will make use of natural tree cavities, broken-off snags, or large gaps in tree trunks. They may also nest in sheltered depressions on rocks, cliffs, caves, on artificial platforms, on the grounds or they may even take advantage of heron's nests. Those birds found in the desert, commonly breed in the arms of Saguaro cacti.

Once they have decided on a nest site, they will line the nest with some feather and other soft material found in their environment.

Depending on environmental conditions (availability of food, for example), a clutch may consist of 1 up to 6 white eggs, but 2 or 3 are more typical and over 4 eggs is very rare. Each egg measures about 2.2 inches (55.2 mm) in length and 1.8 inches (46.5 mm) in width; and weighs about 1.8 oz (51 g). The eggs are incubated for about 25 - 33 days (mostly 27) by mostly the females. The males instead hunt and feed the brooding females and later the young. He may relieve the female when she gets off the nest for short times. Both are very protective of the nests and their young. They angrily attack intruders near the nest, hooting loudly and snapping their bills. The hatchlings are covered with white down, blind and completely helpless. Their eyes open when they are about 7 days old. The females brood them almost continuously for two to three weeks and the males guard the nests. Once the chicks are older, the females also hunt to meet the demand for food of their growing young.

Nestlings are usually seen on the edge of the nest when they are about 32 days old. When they are about six weeks old, they start exercising their wings and learn to flight and they usually hang out on branches near the nest, earning them the nickname "branchers."

Families usually remain together for several weeks after fledging until the young disperse.

They usually only produce one brood a year.

The males' deep but loud "hoo-h'HOO--hoo-hoo" (with either four or five syllables) can be heard over several miles. Females also hoot, but their voices are higher-pitched, in shorter sequence.

Juveniles make loud, raspy hissing or screeching sounds that are similar to those made by the Barn Owls.

Great Horned Owls are most vocal from dusk to midnight and then again just before dawn.

Great Horned Owls have been recorded to live in the wild for about 13 years - although some sources suggest that wild birds survived 29 years. Captive birds have a reasonable life expectancy of 29 up to 38 years, if proper attention is given to their diet and other needs.

Most adult mortalities have been human-related, such as shootings and trappings, or flying into man-made objects, such as buildings and powerlines (leading to electrocutions) or get killed on impact by cars.

Due to their large size, adults have few natural predators, except the occasional attacks by large eagles, Peregrine Falcons, Snowy Owls or Northern Goshawks, but these rarely result in death.

Their eggs and young are preyed on by foxes, coyotes and cats, and other birds of prey, such as Peregrine Falcons.

They reach reproductive maturity when they are about 2 years old.

BeautyOfBirds strives to maintain accurate and up-to-date information; however, mistakes do happen. If you would like to correct or update any of the information, please send us an e-mail. THANK YOU!