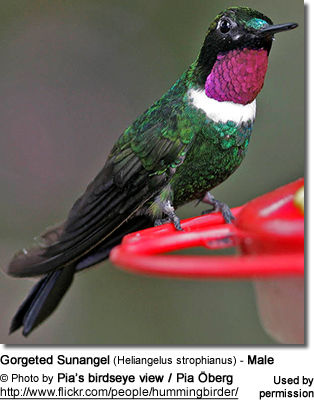 They are usually found in damp, bushy ravines in humid and wet pre-montane forests, shrubby edges, and thickets. These hummingbirds typically forage alone low in covered areas. They rarely occur in open areas. 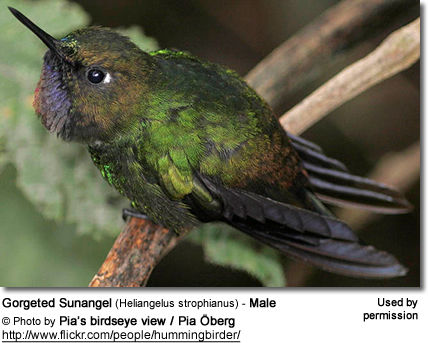 Both genders have a broad white or buffy white crescent across the chest. The feathers on the forehead grow over the base of the bill covering the nostrils (which are exposed in the similar Amethyst-throated Hummingbird).

Adult male: The plumage is mostly iridescent green, except for the bright pinkish / rose-colored throat patch (gorget) - which may appear darker in poor light conditions or at certain angles, a bluish-green frontlet above the beak and the white crescent below the gorget. They are identical to male Amethyst-throated Sunangels, except for a broader green chest belt. The abdomen is greyish buff (not grey as in the Amethyst-throated male). The tail is longer and dark-steel blue in color (rather than bronze green).

Adult Female: Looks identical to the Amethyst-throated female, except the tail is dark blue instead of bronzy green, and the throat shows traces of white.

The Gorgeted Sunangels primarily feed on nectar taken from a variety of brightly colored, scented small flowers of trees, herbs, shrubs and epiphytes. They favor flowers with the highest sugar content (often red-colored and tubular-shaped) and seek out, and aggressively protect, those areas containing flowers with high energy nectar. They use their long, extendible, straw-like tongues to retrieve the nectar while hovering with their tails cocked upward as they are licking at the nectar up to 13 times per second. Sometimes they may be seen hanging on the flower while feeding.