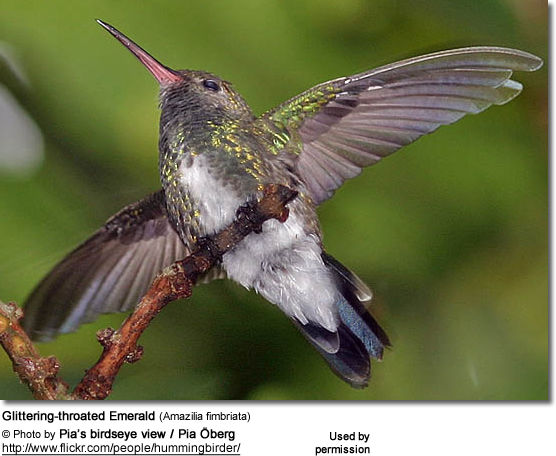 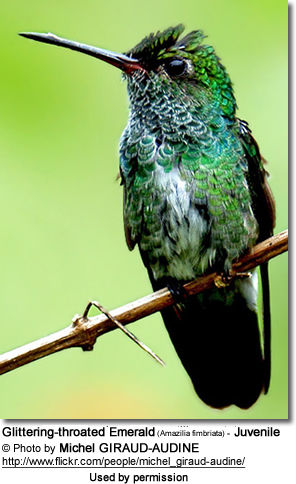 The Glittering-throated Emeralds (Amazilia fimbriata) - sometimes referred to as Lesson's Emeralds - are South American hummingbirds that occur naturally from Colombia, Venezuela, the Guianas, through to south-eastern Brazil and south Bolivia.

The Glittering-throated Emerald Hummingbird is found in the following countries:

It is common to fairly common in most parts of its range - but more so in the northern and eastern parts. In areas where they are uncommon, their decline is probably a result of deforestation of the coastal areas.

Individuals of them are typically seen perching in the open alone. 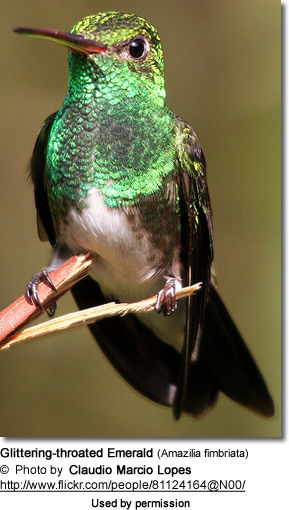 The seven subspecies show some physical differences in coloration and are found in different regions in South America. 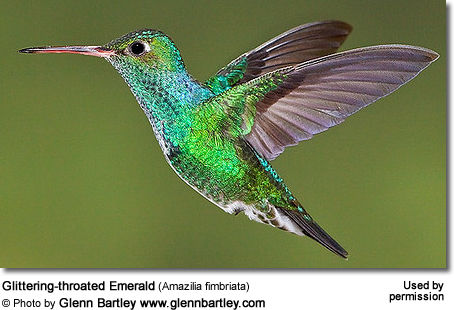 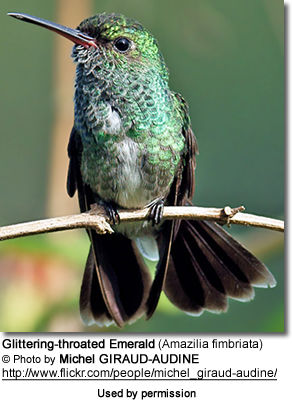 Common Physical Characteristics: They have medium-sized straight bills with dark-colored upper bills and flesh-colored, dusky-tipped lower bills. The legs and feet are blackish. The eyes are dark brown, with a small white patch behind each eye. The head is glossy bronze-green.

The adult male's throat and chest is glittering light green or bluish green. Even though the throat may show a hint of blue, it is never deeply blue. The center of his lower chest and abdomen are white, while the sides are bronze-green. The vent and under tail feathers are white with brownish sides. His upper plumage is bronze-green to golden. The tail has two central bronze-green feathers, turning darker towards the external blue-black flight feathers. On the wings, the flight feathers are blackish-bronze.

Adult females look similar but they have white bars on the throat. The female's plumage is generally duller. Her most external flight feathers of the tail have greenish-grey tips.

Juveniles have more greyish-brown on belly than white color. 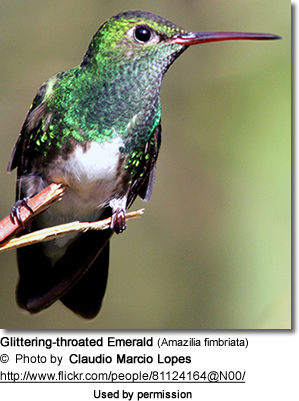 The male's songs are described as a repetitive series of short, high-pitched notes "tseet tchew tchip tchew tseet" in random sequence. Their calls are rich chatters and soft "tsee" sounds - the last note sometimes in descending tone. In flight, they give loud "peep-peep" calls, rising and descending.

The female Glittering-throated Emerald is responsible for building the deep cup-shaped nest out of plant fibers woven together and green moss on the outside for camouflage in a protected location in a shrub, bush or tree about 6.6 ft (2 m) off the ground. She lines the nest with soft plant fibers, animal hair and feather down, and strengthens the structure with spider webbing and other sticky material, giving it an elastic quality to allow it to stretch to double its size as the chicks grow and need more room. The nest is typically found on a thin horizontal branch. It takes her 6 to 12 days to build the nest

The average clutch consists of two white eggs, which she incubates alone for about 14 to 17 days, while the male defends his territory and the flowers he feeds on. The young are born blind, immobile and are covered with buff down on the back. The female alone protects and feeds the chicks with regurgitated food (mostly insects since nectar is an insufficient source of protein for the growing chicks). As is the case with other hummingbird species, the chicks are brooded only the first week or two, and left alone even on cooler nights after about 12 days - probably due to the small nest size. The chicks leave the nest when they are about 18 - 22 days old.

The protective female is likely to perform fly-attacks against predators and intruders approaching the nest site. She usually produces two broods per year, sometimes more. 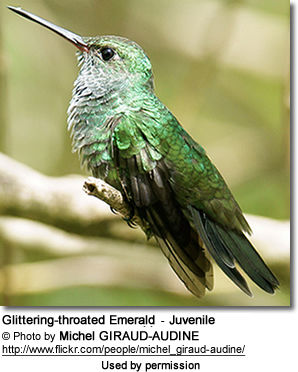 The Glittering-throated Emeralds primarily feed on nectar taken from a variety of brightly colored, scented small flowers of trees, herbs, shrubs and epiphytes. They forage at low to medium height in shrubs and second growths. They favor flowers with the highest sugar content (often red-colored and tubular-shaped) and seek out, and aggressively protect, those areas containing flowers with high energy nectar.They use their long, extendible, straw-like tongues to retrieve the nectar while hovering with their tails cocked upward as they are licking at the nectar up to 13 times per second. Sometimes they may be seen hanging on the flower while feeding.

Males establish feeding territories, where they aggressively chase away other males as well as large insects - such as bumblebees and hawk moths - that want to feed in their territory. The male perches on nearby open branches and utters vocal warning signals to predators or intruders; if they are ignored, he will perform agonistic flights. 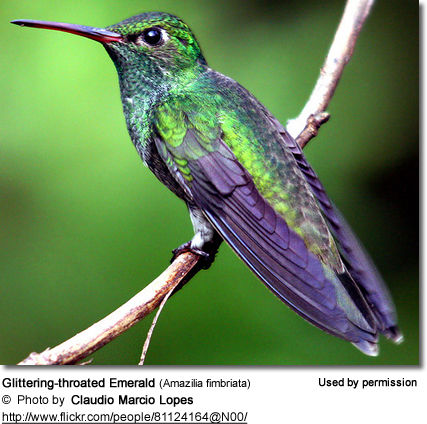