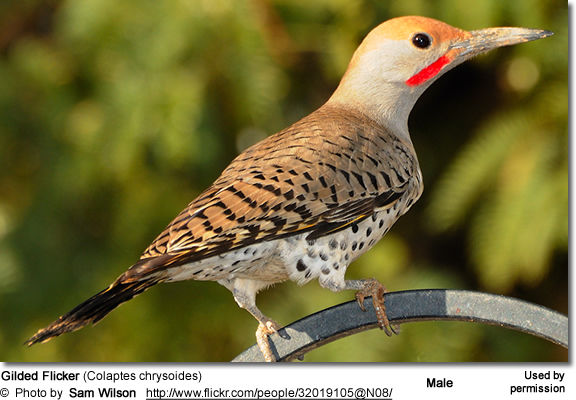 The Gilded Flicker (Colaptes chrysoides) - also known as Cape Gilded or Common Flicker - is one of the larger woodpeckers in the Picidae family.

A group of flickers has several names: a guttering, a menorah, and a Peterson.

In the 1960s, the Gilded Flicker, Red-shafted and Yellow-shafted Flickers were all grouped together as conspecifics (subspecies) of the “Northern Flicker.” The main reason for this was the extensive interbreeding between these subspecies.

However, in 1995, the Gilded Flicker was recognized as a full species in its own right based on the fact that it rarely inbreeds with the other flickers; it has a distinctive appearance; and - having adapted to desert habitats - it has its own, separate range.

While Northern Flickers can live up to 9 years, there is no data on the longevity of the Gilded, but is assumed to be comparable.

The Gilded Flicker is a resident species of the Sonoran, Yuma, the eastern Colorado Desert regions of the southwestern United States, and northwestern Mexico. This includes all of the Baja Peninsula except the coastal regions between Tijuana in northern Baja and Guerrero Negro in central Baja California, and along the west coast of the Mexican mainland south to Mazatlan.

The Gilded is considered a permanent resident throughout its range, with only short, local migratory movements. 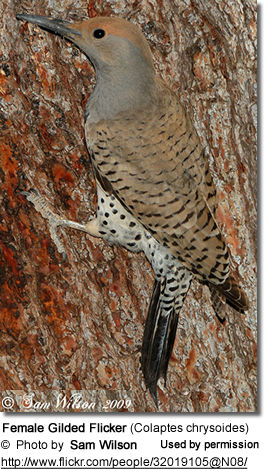 The Gilded Flicker lives in several different types of woodland habitats. It dwells in the southwestern desert woodlands; this includes the giant cactus forests of the Sonoran Desert, other large saguaros of Arizona and Baja, California, and the Cardón cacti of Baja, California.

Although it prefers dry climates for nesting, it can be found in most wooded regions of North America, particularly those with mature cottonwood trees near streams; however, riparian habitats are not as quickly chosen as the desert areas.

In addition, this species also frequents spaces occupied by humans, having adapted well to urban, suburban, and rural areas, as well as parks, farms, woodlots, savannas and forest edges.

Local loss of habitat has hurt the species in some locations, with overall populations declining compared to historical levels prior to 1900. However, there are some indications that populations have stabilized, and they are still locally common in areas of suitable habitat. T

he IUCN lists the Gilded Flicker as a species of "Least Concern." 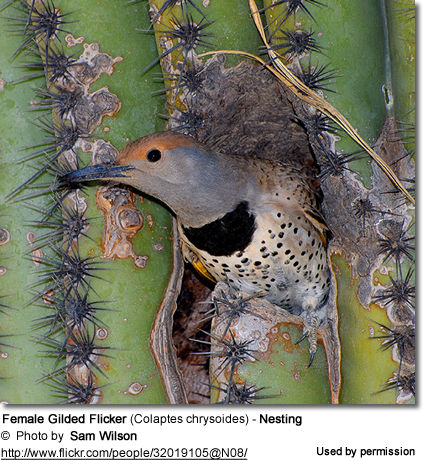 Range: In the United States, from extreme southeastern California (Colorado Valley) and southern and central Arizona south in the desert areas to Northwest Mexico, where they are found in northern Sonora.

Range: Found in Mexico, from the northwestern state of Sonora south to northern Sinaloa. 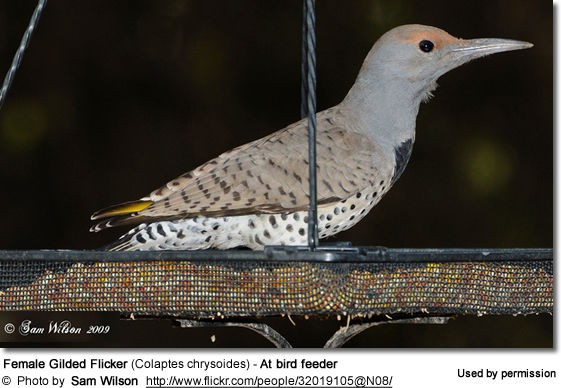 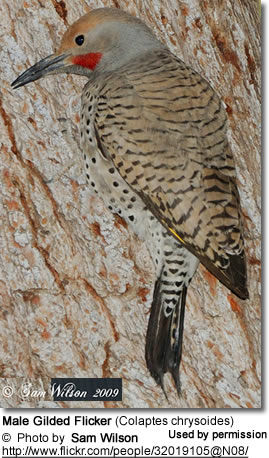 Distinctive golden yellow markings under the wings and tail have given the Gilded Flicker its name. The bright shaft colors are visible on the undersurface of the wings, and the birds will flash these colorful underwings at potential mates during courtship and at rivals when defending territories.

The back is light brown with black, horizontal barring. The breast features a large, black crescent, and the tan to whitish undersides are speckled black. It has a brown cap and a pale, white rump which can be seen in flight.

The male Gilded Flicker can be distinguished from the female by the presence of a red mustache.

Juvenile plumage resembles that of the adult, but the colors are less bright. Some features, such as the malar stripe and black bib, are less distinct.

Its markings are so distinctive that it could only be mistaken for other flickers. Within Mexico they are not easily confused with other bird species due to the abundant black spots on the undersides.

The red moustache/malar stripe, grey face and throat and grey ear-coverts contrast with the otherwise similar Yellow-shafted Northern Flicker, which has a black malar stripe, tan throat, and tan ear-coverts.

These solitary, non-migratory birds feed predominantly on insects—preferable ants.  In fact, flickers eat more ants than any other bird species in North America.

They are ground-foragers; much of their days are spent probing anthills and finding other insects, pollen, and nectar.

In the colder weather, the Gilded Flickers consume fruits from wild trees and shrubs as well as wild berries and cactus fruits.

They can be seen hunting in vegetation and digging in the soil with their strong, heavy bills. They will also capture invertebrates dwelling in tree bark. As they forage in the trees, they find beetles, wasps, caterpillars, and insect larvae under the bark. They also eat worms, acorns, nuts, seeds and grains. Occasionally they visit feeders if they contain fruits.

The return to the breeding grounds and commencement of breeding behavior take place between mid-March and early April.

Not long after, the males begin to exhibit courtship displays, and by late April to early May, pairs have bonded and begun the breeding process. Gildeds are monogamous and mate for life, although a bird may find a new mate to replace one that has died or disappeared. They have one or two broods per year.

The Gilded Flicker seeks areas near clearings and other open areas for its nest sites. It will also choose places at the forest edges and in forests interspersed with meadows, fields, and clear-cuts. Nests have also been seen in savannas and near swamps, ponds, and recently flooded areas containing snags.

The nest itself is built in saguaro cacti; the birds excavate a large nest cavity in the cactus, sometimes making the cavity so vast that it weakens the cactus. If the top section breaks off, possibly during a wind storm, the cactus may die because of rain water pouring into, leading to systemic infection. The cactus is able to protect itself against water loss into the cavity of the nesting hole by secreting sap that hardens into a waterproof structure that is known as a saguaro boot. This is different from the nest holes of the Northern Flickers, who nest in riparian trees rather than in cacti.

The nest cavity is dug out near the top of the cactus and not lined with any nesting materials. The nesting territory consists of the nest site and its immediate surroundings. The Gilded might build its nest in a watershed area if suitable cacti cannot be found; in that case, it will choose a cottonwood or other deciduous tree and build the nest without added nesting materials. It will later become home to other birds, such as small owls, bats, other mammals and reptiles. There is competition with the European Starlings for these nest sites, but the flicker usually wins.

The pair will excavate the nest cavity together and defend the nest site aggressively by vocalizing and drumming in order to define the boundaries. It is built early in the year, before the Northern Flickers prepare their nests, probably to avoid the summer heat.

The females lay an average of 3 to 5 one-inch oval or elliptical white eggs which are incubated by both sexes for two weeks. Once egg laying begins, the birds remain at the nest, taking turns incubating the eggs. The incubation period for Northern Flickers is 11 to 14 days, and incubation begins one to two days before the female lays the last egg. In the early days, the female incubates most of the time, but later, the male takes over night incubation. Her attentiveness decreases as his increases.

The young hatch within one to two days of each other. Not long after they hatch, the young birds can be heard producing a most unusual buzzing sound. They will continue to produce this sound until they all are fully feathered. The purpose of this sound is to ward off any predators that might happen upon the nest; it has been compared to an agitated swarm of bees.

The altricial chicks remain in the nest for four weeks, feeding off of regurgitant given by both parents. After that, they climb to the top of the nest, awaiting feeding, and after 24-28 days, the parents taper off the feeding in order to encourage the young to leave the nest in search of prey.
Once the fledglings are able to fly short distances, they do not return to the nest. The parents continue to feed and protect them for two to three weeks, and then they are on their own.

Family groups are often seen feeding together into late summer. Flickers maintain their winter home ranges, and first-year adults often return to their own natal nest sites to breed for the first time. Older adults return to the breeding site year after year

The Gilded Flicker produces long calls which sound like “wika-wika-wika-wika” and “kik-kik-kik-kik-kik.”  The calls are quite loud and high-pitched. There is a high, long, drawn-out descending "kleee-yer," which is used in breeding season, and a territorial "wick wick wick."  The “wick-er” call has given them their name, and a single "klee-yer" note is given year-round. Gilded Flickers will tap loudly on metal objects as a territorial sound.

The loud, sharp calls of flickers are audible for a mile or more and are one of the characteristic sounds of the Sonoran Desert.

The Avianweb strives to maintain accurate and up-to-date information; however, mistakes do happen. If you would like to correct or update any of the information, please send us an e-mail (support@beautyofbirds.com). THANK YOU!