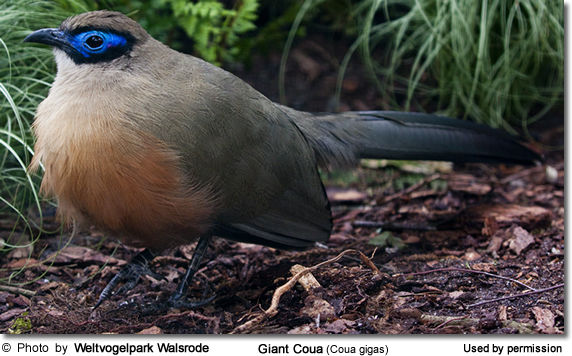 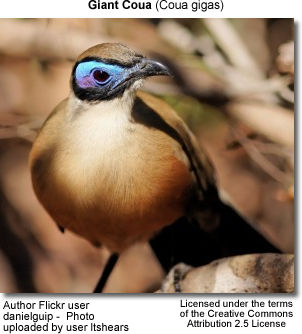 The Giant Coua (Coua gigas) - also known as Giant Madagascar Coucal - is a non-parasitic Cuckoo found on the island of Madagascar located off the southeastern coast of Africa.

The Giant Coua occurs naturally in southern and western Madagascar north to the Betsiboka River in central-north Madagascar.

This species inhabits coastal lowlands up to an elevation of 2,300 feet (about 700 meters), and large unlogged gallery forests that lack dense shrub layers.

Even though they are quite common and not currently at risk of extinction, there is evidence of a population decline likely caused by hunting and trapping of this species by children and environmental disturbances, such as fires and logging, that potentially compromise their resource use.

They have characteristic bare, blue patches around their eyes with a black border around them. The upper plumage is greenish-brownish. The throat is whitish and the plumage below is rufous-colored.

Like all other members of the Cuckoo family, they have large feet with reversible third toes.

They are frequently observed foraging in logged gallery forests with higher canopies.

Curiously, their feeding technique appears to change with the season they are in. During the dry season, they usually gather food from the ground. During the wet season, they often leap and sally to catch their prey. This may be due to the fact that they typically breed in the rainy season, when food is readily available. When breeding, their requirement for protein increases and they may be more drawn to increasing their protein intake by pursuing flying insects.

Unlike cuckoos, Giant Couas build their own nests out of twigs and leaves that are usually well hidden in trees or bushes; and they incubate their own white-colored eggs. A clutch can consist of up to 4 eggs. Giant Couas also raise their own young. 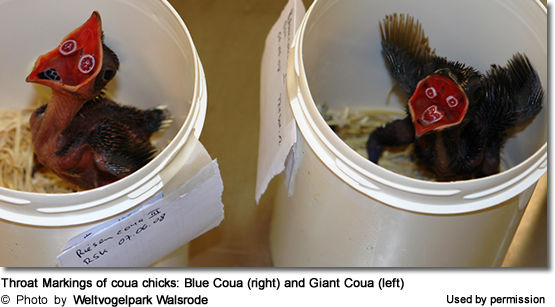