As is suggested by the name, this disease affects primarily fowl, such as chickens, turkeys and water fowl (increasing order of susceptibility).

This disease is caused by the bacterial organism, Pasteurella Multocida.

A chronic form of the disease exists in which lesions localize in a joint, wattle, infraohits, sinuses or other tissue.

Many drugs are available to treat fowl cholera, such as sulphonamides, tetracyclines, erythromycin, streptomycin, penicillin. The disease often recurs after medication is stopped, requiring long-term or periodic medication.

Improve sanitation. The bacterium is easily destroyed by environmental factors and disinfectants, but may persist for prolonged periods in soil. Possible infection factors may be rodents, cats and possibly pigs.

Bacterins* may be used to aid prevention. (*Bacterin is a suspension of killed or attenuated bacteria for use as a vaccine).

It is the most common pasteurellosis of poultry. As the causative agent is Pasteurella multocida, it is considered as a zoonosis.

Besides chickens, the disease also concerns turkeys, ducks, geese, raptors, and canaries. Turkeys are particularly sensitives, with mortality ranging to 65&.

The recognition of this pathological condition is of ever increasing importance for differential diagnosis with avian influenza.

Outbreaks occur in cold and wet weather (in late summer, fall and winter). The outbreaks are often traced back to the presence of rodents in the breeding houses. These are thought to spread the disease from carcasses of died birds (possibly from neighboring backyards), improperly disposed. Once the disease is introduced to a flock, it will stay until culling. Chronic carriers can always lead to re-emerging of the disease in susceptible birds.

In wild birds, this disease most commonly associated with wetlands. Blanchong et al. determined that wetlands act as short term reservoirs, recording large amounts of the bacterium in the soil and water through the duration of the outbreak. Wetlands, however, are not long term reservoirs. The disease presents in two very different forms: acute and chronic. Birds with chronic avian cholera, more common in domestic fowl, exhibit prolonged illness with more localized infections. Chronic infection has been demonstrated in Snow Geese, and these individuals are believed to be long term migrating reservoirs for the disease. Once the bacteria gets introduced into a population of susceptible birds, an outbreak of acute avian cholera follows. Infected birds will die 6–12 hours after contracting the bacterium, and very few ill birds have been described. Due to association and dense aggregations, waterfowl are most commonly affected by P. multocida, however scavengers and other water birds are often affected in large multi-species outbreaks. 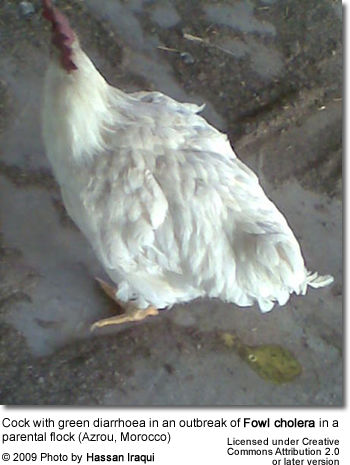 In acute cases, a green diarrhoea can be an early symptom.

The most typical symptom, in chronic cases, is the swelling of the wattles. It is more frequent in resistant local breeds. Rather than a general infection, localized infections are more characteristic. These often occur in the respiratory tract including the sinuses and pneumatoics bones, hock joints, sternal bursa, foot pads, peritoneal cavity and oviducts.

In acute cases, the most typical p.m. lesion is the petechiae observed in the epicardial fatty tissue. Necrotic foci on liver are usually found and general hyperemia is common. Due to the speed of infection and mortality, birds are in good body condition and do not exhibit the signs of prolonged illness.

The most efficient treatment in breeding flocks or laying hens is individual intramuscular injections of a long-acting tetracyclines, with the same antibiotic in drinking water, simultaneously. The mortality and clinical signs will stop within one week. But the bacteria might remain present in the flock.

Copyright: Wikipedia. This article is licensed under the GNU Free Documentation License. It uses material from the Wikipedia.org. Additional information added by Avianweb.