The Dietary Requirements of the Fig Parrots 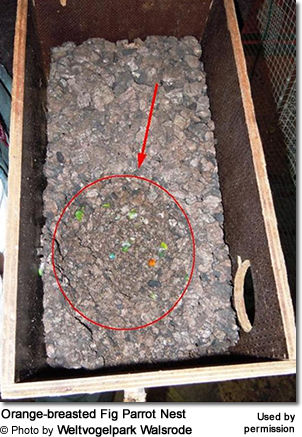 In general, a budgie or cockatiel-sized box with an enlarged opening is suitable for breeding. The entrance hole should be about 2 inches (50 mm) in diameter. Australian parrots generally breed in hollow logs.

Dimensions of the nest box or log can vary widely, influenced by the owner's preferences and the birds preferences.  Some prefer to breed in small boxes which have just a single entrance hole, others use boxes which have an extra opening on the opposite side to the entrance hole, and some pairs prefer to gnaw a second hole in the nest-box while incubating the eggs. Parent bird's preferences can also be influenced by the size and type of nest-box / log in which the bird was hatched and reared.

In cases, where pairs are not accepting the nest boxes provided, it is recommended to distribute nest boxes / logs of various types and sizes throughout the flight. This way the pair can choose the nest box and the area they feel adequate for nesting activities. Once they settled on a nest box / log, all the others can be removed, cleaned and used in a different flight. The nesting box should be sturdy enough to withstand the heavy chewing that they will be inevitably subjected to.

The nest box floor should be covered with decomposed non-toxic saw dust, wood shavings or other suitable materials.

When the chicks reach about 14 days old the parents use the extra opening through which to remove the chick's droppings, which is a great help in keeping the nest-box clean and dry.

Fig-parrots are rare in aviculture and have a reputation of being delicate and dieing without apparent reason. However, a lot of the breeding failures are traced back to breeders' ignorance pertaining to their dietary requirements. Provided fig-parrots are well acclimatized and maintained in appropriate conditions, they are pretty hardy and quite prolific. Careful attention to their diet and hygiene is needed for successful breeding program. Artificial incubation and handfeeding may become necessary, as there are cases of captive-bred parents abandoning their eggs. On the other, generally, fig-parrots make excellent parents and their parent-reared offspring will often assist in the rearing of additional clutches.

Fig parrots are rare and if their special dietary needs aren't met are likely to die maturely. Because of this, they have the reputation of being "delicate." However, provided they are carefully acclimatized and maintained in correct conditions, they are pretty hardy and rather prolific. Still, these colorful little parrots are not recommended for the beginner or half-hearted aviculturists as they do have special demands caused by their special diet and messy eating habits.

Because of their special reqirements, they are not recommended for inexperienced breeders -- also as they are so rare and the survival of the species may depend on captive breeding successes, it is important that fig-parrots are integrated into a well-managed breeding program with breeders who are experienced enough to be able to meet the demands and can address possible problems that are likely to present themselves.

The best-known fig-parrots species in aviculture:

Until about two years of age, male and female fig parrots look the same, then the male begins to color out on the head and bib. Some species / individuals may start breeding as young as 12 months, others may not commence until they are 3 years old. The breeding season in their natural habitat may commence in August or September, and may continue to December. In the United States, the breeding season begins in March through May.

Fig-parrots usually produce one clutch a year consisting of two to three white eggs. Fertility has been consistently good, in fact, close to 100%. The hen and sometimes the male incubate the eggs for about 18 up to 26 days - duration and male incubation pattern vary with each sub-species. During brooding, the male feeds the hen and once the chicks hatched, he participates in raising the chicks. The young fledge when they are about 6 to 7 weeks old and are independent another two weeks after that, at which time they can be separated. The young should be kept in a quiet area, as they are initially rather timid.

If they get spooked or stressed during the breeding process, they may abando or even kil their chicks. This may not happen until days after the event.

Captive fig-parrots are known to abandon their chicks, thus checking on the chicks frequently when the parents are out of the nest (do not upset the parents by checking while they are sitting on the young, which may cause them to inadvertently kill the chicks. If there is any sign of abandonment or parental abuse, it may be necessary to pull the chicks for handrearing.

Many hours went into researching this topic - however, the most important message I would like to convey is: Don't rely solely on information published on this and connected page. Your situation, and the condition / requirements of your birds may be different. Too little is known about fig-parrots, and if you are considering breeding this species - and, therefore, be part of a crucial conservation effort - I would recommend you discuss with breeders who have a successful track record with these species and consider any recommendations they may have pertaining to diet, housing and general care. Their experiences may be different and they may have the benefit of additional knowledge / research data not covered on any of these pages. Ideally, you would work in concert with those who have been successful with these species and a qualified avian vet who will be able to identify and remedy any problems before casualties occur. A better understanding is continuously gained with these species, and it's important to keep up on developments and new discoveries to ensure the health, well-being and, in fact, continued existence of the magnificent fig-parrots.