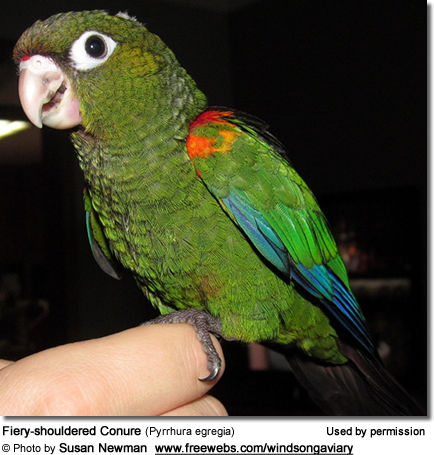 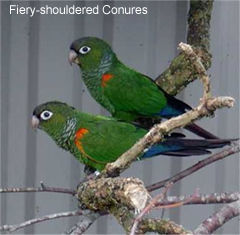 The Fiery-shouldered Conures (Pyrrhura egregia) are endemic to the subtropical or tropical moist montanes of northeastern Brazil, southwestern Guyana and southern Venezuela. They are resident (non-migratory) within their range.

Outside the breeding season, they are usually seen in noisy flocks of up to 20 individuals. When breeding, they usually remain in pairs or small family groups. When roosting, they are generally quiet and well hidden in the canopy, thus difficult to spot. However, their loud calls made in flight can easily be heard.

They are most common in Tepuí (mountain) forests and forest edges; but may also wander to the bases of the mountains, and visit village gardens and parks. They occur at elevations from 2,300 - 5,900 feet (700 - 1,800 meters).

They are at risk of extinction due to their limited distribution and destruction of their habitat in parts of their range, but their populations are still considered stable.

Their plumage is mostly green, except for the bright yellow-orange "shoulder" feathers (for which they were named) and lesser (inner / shorter) underwing feathers, green-edged brown feathers across the crown and lores (area between the bill and eyes), reddish-brown ear coverts (feathers covering the ears), and whitish-edged green feathers along the sides of the neck and chest, reddish-brown patch on the abdomen.

The bill is horn colored. The eyes are brown and the eye rings are bare and white.

Lack most of the bright markings of the adult, which grow in as they mature. There is less barring on the chest. 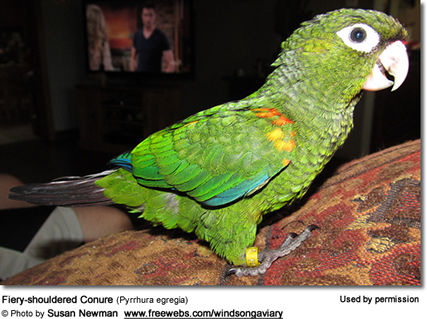 In the wild, these conures will feed on the nectar, seeds, fruits and plant material of several tree species.

These conures generally move around in small, noisy flocks that are heard before they are seen. Their vocalizations are harsh, shrill and grating. Once they are settled in trees, they are typically silent and difficult to see.

Fiery-shouldered Conures rapidly become confiding. They are smart, playful, mischievous and very sweet natured, with a gentle disposition. They are less noisy than other conure species (they are usually only heard when excited) and are less destructive than many of the other species.

Within their natural range, most breeding occurs between March and June, where they generally nest in tree crevices.

In captivity, these conures are fairly easy to breed, as long as the pair is compatible. The average clutch size is 4 to 5 eggs, occasionally 6. The eggs are incubated for about 23 days. The young fledge when they are 50 - 51 days old