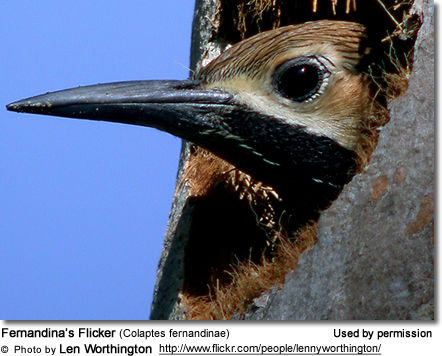 The Fernandina's Flicker (Colaptes fernandinae) is one of the most endangered birds in the world. With only 600-800 birds in existence, its numbers continue to decline due to habitat loss. It is endemic to Cuba and lives exclusively in isolated patches in that country. The population living in the Zapata Swamp region of Cuba claims 250 birds, but that is the largest population known. This number may have dropped with the many hurricanes which have hit the island.

Also named the Cuban Flicker, these are not social birds. They forage and live alone, except during breeding season. The Fernandina's Flicker will sometimes form loose colonies at that time, but even within those colonies, the males are combative—usually over breeding spaces.

More information is needed to develop a conservation plan for the species. It is classified as Vulnerable rather than Endangered because, although its overall population is very small, severely fragmented and rapidly declining, the largest sub-population in Zapata is too large for the species to qualify as Endangered.

Even though its numbers were never very high, the Fernandina’s Flicker was known to have inhabited much of the island. Now, however, it can only be found in isolated locations in nine of the country's 15 provinces: Camagüey, Cienfuegos, Granma, Holguín, Las Tunas, Matanzas, Pinar del Río, Santiago de Cuba, and Villa Clara.

A medium-sized woodpecker, the Fernandina's Flicker ranges in length from 14–15 inches (33–35 cm).

Overall, it is mostly yellowish-tan to brown and covered with varying amounts of black barring. The head is a shade of cinnamon and displays streaks of black.

The upperparts and the wings show strong, dense black tones, while the underparts and underwings are predominantly yellow. The crown is yellow with a cinnamon wash, and the ear coverts are a darker shade of yellow. The bill is long, narrow and decurved.

The male has a black moustachial (or malar) stripe, whereas the female’s malar region is heavily mottled with white.

Like its congeners (others in its genus), the Fernandina's Flicker forages on the ground for ants and other insects, worms, grubs and seeds.

It tosses aside leaf litter to access the prey on the ground with its strong bill. Its food is taken from the soil and dusty tracks. Most of the time, the birds forage by themselves; but during breeding season, the pairs can be seen hunting together.

Courtship takes place in late December and January, and nest excavation begins in February or March. Breeding activity takes place in March through June, and loose colonies of up to 15 pairs have occasionally been found at Bermeja in the Zapata Swamp. The Fernandina's Flicker requires palm trees in which to build its nest. It breeds in palm-savannah, where it uses both dead and live palm trees, especially the Palma cana tree; however, these are disappearing, and the birds seem reluctant to use other trees. Their choice of palm trees may have something to do with the palm as a good source of thatch; these trees are often invaded by fungal spores, and to the flicker, they are more suitable for nesting.

Like other woodpeckers, it is a cavity nester, but rather than building its nest from scratch, it prefers to use nest holes begun by West Indian Woodpeckers. The flicker will take over the nest and finish the excavation work to its specifications before moving in.  The Cornell Lab of Ornithology, on a trip to Cuba in April, 2007, reported that they don’t know if the birds would be willing to construct their own cavities rather than take over another bird’s cavity. It is also unknown if they would adapt to artificial, man-made cavities.

During breeding season, the males of this species become quite aggressive. The mated pairs will engage in aggressive, aerial conflicts during this time, and males will become combative with other males over nesting sites. Ordinarily a solitary, non-social species, the Fernandina’s come together only for breeding.

After laying a clutch of three to five white eggs in cavities or tree holes, the female will incubate the eggs for about 18 days. After hatching, the, the young will begin to fledge at around 22 days.

Though it is usually a silent species, this flicker does possess several calls. They include a repeated wicka sound, which has given this genus its name, and a series of loud pic notes that are slower and lower-pitched than the Northern Flicker's. These consist of a descending peah and a kind of Krrr, resembling that of the West Indian Woodpecker, Melanerpes superciliaris.