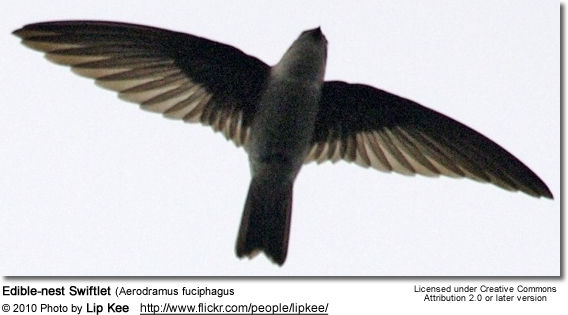 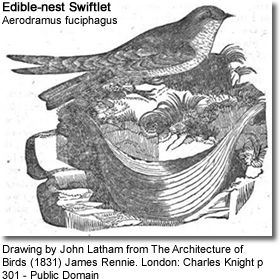 The Edible-nest Swiftlet (Aerodramus fuciphagus) is a small bird of the swift family which is found in South-east Asia. Its nest is made of solidified saliva and is used to make bird's nest soup - a delicacy in Chinese cuisine. The cave swifts are renowned for building the saliva nests used to produce the unique texture of this soup.

It is 11 to 12 cm long and weighs 15 to 18 grams. The plumage is blackish-brown above, paler on the underparts. The rump is slightly paler than the rest of the upperparts. The tail is slightly forked and the wings are long and narrow. The bill and feet are black.

The subspecies A. f. micans is paler and greyer while A. f. vestitus is darker with a rump that is less obviously paler.

Several calls are uttered including a loud, rattling call used for echolocation (a biological sonar) to navigate in dark caves.

There are six subspecies of the Edible-nest Swiftlet:

German's Swiftlet (Aerodramus germani), with two subspecies germani and amechanus, was formerly considered to be conspecific with the Edible-nest Swiftlet, but is now often considered to be a separate species. It occurs in the Malay Peninsula, central Thailand, coastal Vietnam and Cambodia, Hainan, northern Borneo and parts of the Philippines.

It feeds over a range of habitats from coastal areas to the mountains, occurring up to 2,800 metres above sea-level on Sumatra and Borneo. Its diet consists of flying insects which are caught on the wing. It often feeds in large flocks with other species of swift and swallow.

It breeds in colonies in caves, in a cleft in a cliff or sometimes on a building. The bracket-shaped nest is white and translucent and is made of layers of hardened saliva attached to the rock. It measures about 6 cm across with a depth of 1.5 cm and a weight of about 14 grams. Two white, oval, non-glossy eggs are laid.

The nest used in bird's nest soup are composed almost entirely of saliva with little or no plant material. The soup is made by soaking and steaming the nests in water and is said to be an aphrodisiac and to have various medicinal qualities. The nests can fetch high prices and many colonies are harvested commercially. A detailed account of modern nest farming and marketing techniques is given by Jordan (2004).

Some populations such as those in the Andaman and Nicobar Islands have been harvested extensively leading to them being considered critically threatened under the IUCN criteria.