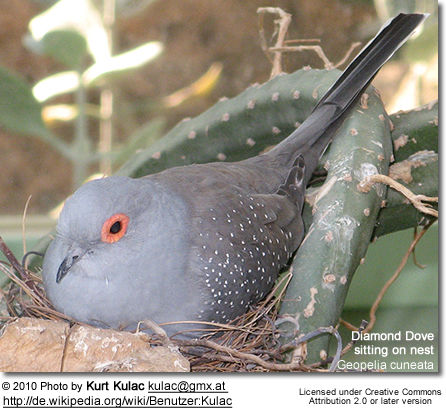 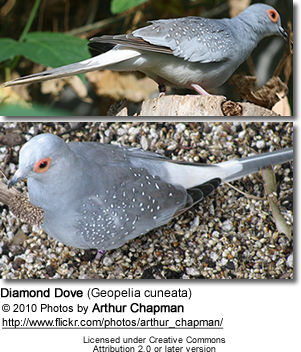 Diamond Doves (Geopelia cuneata) - also known as (Little) Red-eyed Doves or Little Turtle Doves - are native to the Australian mainland, where they - followed by the Peaceful Doves - are the smallest naturally occurring pigeons.

They are mostly found in interior Central, West and Northern Australia. When central Australia is going through a drought, they may relocate to areas where water and food is readily available; typically to areas with recent rainfalls - including coastal areas as well as urban areas (parks and gardens) in Southern Australia.

Within their range, they generally inhabit grassy woodlands, as well as drier grassland and scrubland areas with easy access to water - often beside waterways.

These sociable birds generally move around in pairs, small family groups or flocks.

Within their range, they are widespread.

Within their range, they can readily be identified by their small size, distinctive red eyerings and pale spots on the wings.

The upper parts are mostly brown grey and the belly creamy in color. Both males and females have upper wings with distinctive white spots and black edges.

Their eyes are orange; the bills are dark grey; and their legs and feet reddish or pink.

Some of these mutations have been developed by combining mutations together.

Males and females look alike; except the male is typically larger in size and his head, neck and chest are light blue-grey.

The smaller female has a more brownish plumage and her eye rings are less vivid and smaller in size.

Immature birds have grey legs, grey chests, light grey bills, buffy eyerings and wing-bars rather than spots on the wings.

Diamond Doves somewhat resemble the related Peaceful Doves; however, the latter can readily be identified by their blue-green eye-rings, scalloped blacks and white plumage on the chests and upper backs. Additionally, the Diamond Doves have longer tails; and tend to be slightly smaller in size and slimmer.

Their calls are described as a mournful, slow "coo"; sometimes repeated twice; sometimes followed by a long, short and long coo. When alarmed, they emit a few short, but loud coos.

In flight, their wings occasionally make a whistling "frrr" noises. 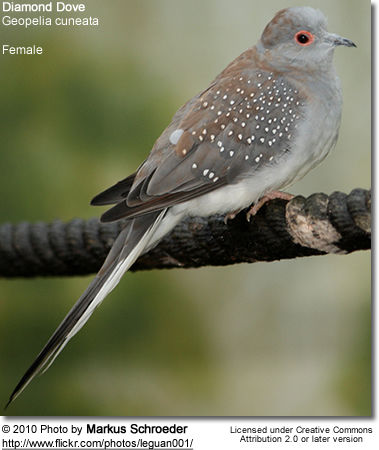 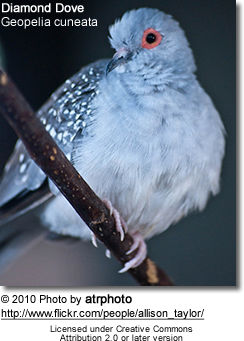 Diamond Doves are usually seen foraging on the ground in pairs or small groups. They mostly feed on seeds from herbs and grasses. To a lesser extent, they will also take ants.

Since they swallow seeds whole, they need grit to help digest the seeds.

Additionally, they should be encouraged to eat a variety of greens and vegetables, and egg food. Sprouting seed is the simplest way to provide your birds with highly nutritious, fresh greens. 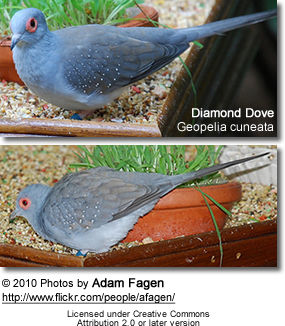 Breeding / Nesting in the Wild

Within their natural range, they may breed throughout the year; but most breeding activities are observed after heavy rainfalls.

The flimsy nests are usually constructed out of fine twigs, grass stems and other plant material found in their environment; and placed in low shrubs or scrubby trees.
The average clutch consists of two white eggs. Both parents share the incubation which lasts about 13 - 14 days. The hatchlings are fully feathered and are cared for by both parents. The young grow quickly and are able to fly by the time they are two weeks old.

Diamond Doves are generally hardy and easy to keep; and they usually breed well in captivity. These social birds should not be kept alone. They should be provided a mate or be placed in a communal flight / aviary with other non-aggressive birds. 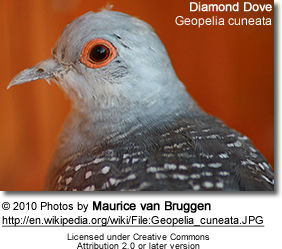 They do fine in spacious aviaries together with non-aggressive finches and softbills, but tend to be intolerant of other doves (particularly males of their own species). Even though several pairs can often be kept in the same aviary - provided there is sufficient room for all - It is generally best to keep one pair per cage or aviary.

Since they spend a lot of time on the ground; they require decent amounts of floor space, where they can walk around and forage. Wire-bottomed cages are not suitable for these doves. The floor should be easy to keep clean and maintain. Several perches should be provided and spaced widely enough for them to fly safely.

They should have some protection from cold temperatures, drafts and wet weather conditions. If necessary, a heating pad, a heat lamp or basking rock (such as those sold in pet stores for lizards) can be used as a supplemental heat source.

Diamond Doves like to nest in open-topped nest baskets; but will use whatever is available in their environment - including seed dishes.

The courtship behavior includes repeated coo calls by the male, who will display his tail feathers by dipping his head low and raising his tail, and spreading the long feathers like a fan towards the female. Bonded pairs are observed preening and feeding each other, and greeting each other with low coos and vibrating their wings.

Tamed pets can be very affectionate and sweet and often sit on their shoulder's owner, cooing to his or her owner. Their human basically replaces any mate they would have had in an aviary or in the wild, and they may become broody and go through the motions of courting their human mate and nesting, as they would with a feathered mate. Females may lay eggs, but those would obviously be infertile. If this happens, it is important to allow the female to complete the entire incubation cycle. If eggs are removed earlier, she is likely to replace the clutch, which depletes her of important minerals potentially leading to serious health problems - including death.