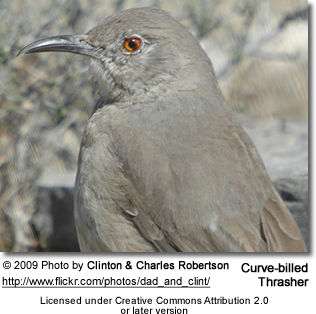 These common birds of the arid Southwest, the Curve-billed Thrashers have successfully adapted to a wide range of habitats, which may explain why they are the most widespread of the western thrashers.

These bold and curious birds will broadcast their presents with their loud "whit-wheet" calls, while flying from shrub to shrub. 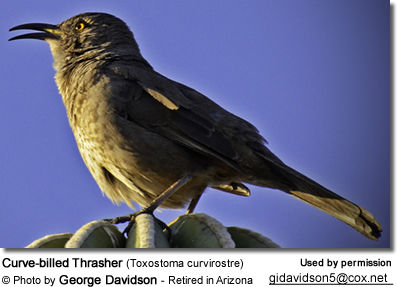 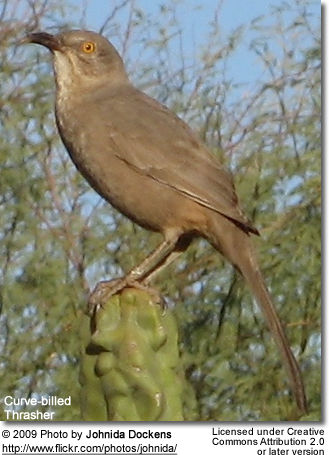 They are mostly resident (non-migratory), as long as food and nesting opportunities are readily available.

Curve-bills are common throughout the semi-deserts and deserts (however avoiding extreme deserts), as well as being found in shrubby and open brush woodland areas. They frequently visit suburban neighborhoods. 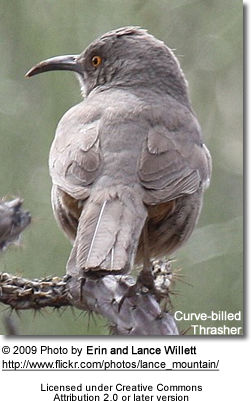 The plumage is overall brownish-grey, with a mottled chest. The tail is mostly dark grey, except for the white streaks on the tail tip and the darker sides. Some have narrow white wing bars. The eyes range in color from yellow to orange or even red-orange.

Populations found in the Sonoran Desert of Arizona and northwestern Mexico (ssp. palmeri) are smaller in size and have longer tails. The eyes are yellow; the greyer chest has less defined spotting. Their wingbars are inconspicuous and the tail corners are greyish.

Those occurring in the Chihuahuan Desert of Texas and central Mexico have orange eyes, a paler chest, more contrasting spots, lighter wingbars and white tail corners. 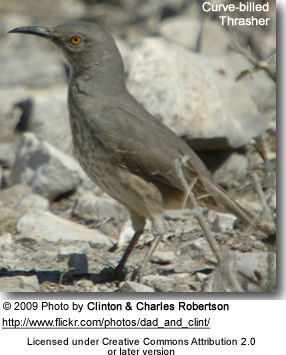 Pairs are monogamous, remaining together all year in a permanent territory. Breeding occurs in spring, at which time the males will be heard singing as they announce their breeding territories.

Their nests are often found in spiny shrub, yucca or prickly-pear - but they clearly favor the cholla cactus plant, where the nests are typically placed under the upper protective branches about 3 - 5 feet (1 - 1.5 meters) above the ground. Its thorny twigs are used to construct the loosely-woven, deep cup nests. The nests are lined with grasses, rootlets, hair, feathers, down or other fine materials.

They may build their nests on top of abandoned Cactus Wren nests or may reuse nests from previous seasons.

The female will lay 2 to 5 eggs (average 3), which are light bluish-green in color, speckled with reddish brown.

During the daytime, both parents share the incubation of the eggs; and at night this duty is mostly performed by the female.

The eggs are incubated for about 12 - 15 days to hatching. Both parents feed and protect the nestlings, which will leave the nest about 14 - 18 days after hatching.

Pairs usually raise two broods a year - if conditions are favorable up to three.

The Curve-billed Thrashers mostly feed on various insects and their larvae (beetles, ants, wasps, etc), as well as spiders, centipedes, snails and sowbugs, and - to a lesser extent - on seeds and the fruits of various cacti (prickly-pear and saguaro) and berries.

They mostly forage on the ground, poking and probing under dead leaves and other plant litter, turning over small rocks and digging holes into the soil with their long, down-curved bill. In hard dirt, they pound straight downward with heavy blows of the bill.