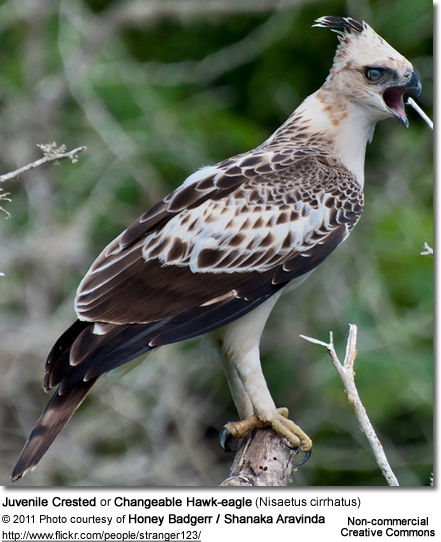 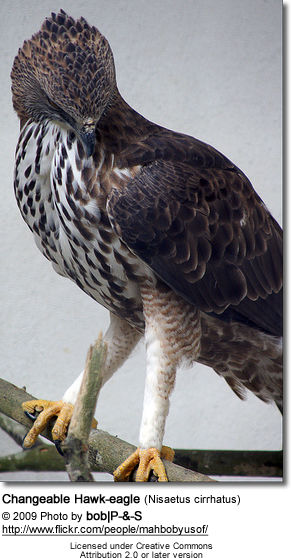 The Crested Hawk-eagle or Changeable Hawk-eagle (Nisaetus cirrhatus), is a bird of prey of the family Accipitridae. They were formerly placed in the genus Spizaetus but studies pointed to the group being paraphyletic resulting in the Old World members being placed in Nisaetus (Hodgson, 1836) and separated from the New World species.

Changeable Hawk Eagles breed in southern Asia in India and Sri Lanka and from the SE rim of the Himalaya across Southeast Asia to Indonesia and the Philippines. This is a bird occurring singly (outside mating season) in open woodland, although island forms prefer a higher tree density. It builds a stick nest in a tree and lays a single egg.

The Crested hawk-eagle is a medium-large raptor at about 60–72 cm in length. It is a relatively slender forest eagle with some subspecies (especially limnaetus) being dimorphic giving the name of "Changeable". This, and also a complicated phylogeny further complicates precise identification.

Normally brown above; white below with barring on the undersides of the flight feathers and tail; black longitudinal streaks on throat and chocolate streaks on breast. Some subspecies have a crest of four feathers, but this is all but absent in others. Sexes alike; female larger, and young birds are often whiter-headed and less patterned.

The wings are long and parallel-sided, and are held flat in flight, which helps to distinguish this species from the similar Mountain Hawk Eagle. In overhead flight, comparatively rounded wings (upturned at tip), longish tail, white body (spotted with brown) and grey underside of wings (streaked and spotted) are leading pointers. 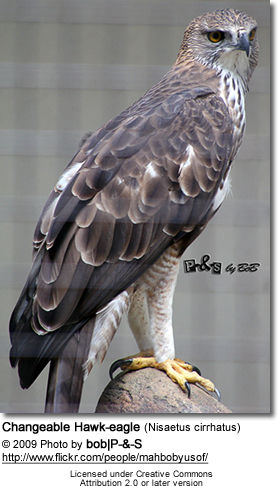 They like to keep a sharp lookout perched bolt upright on a bough amongst the canopy foliage of some high tree standing near a forest clearing (see photos). There they wait for junglefowl, pheasants, hares and other small animals coming out into the open. The bird then swoops down forcefully, strikes, and bears the prey away in its talons (claws) (Ali and Daniel1983). 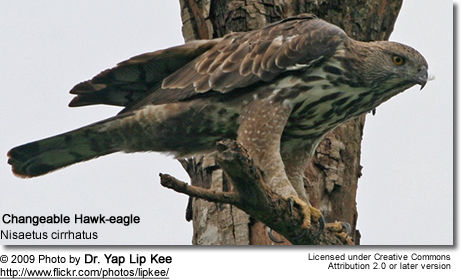 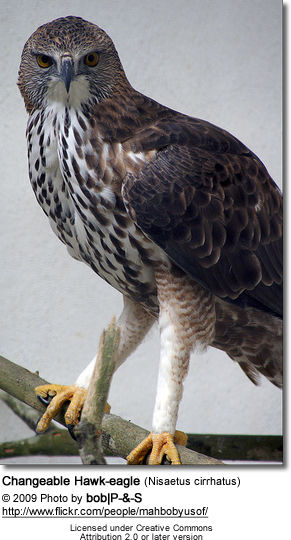 Two distinct groups exist, one with crests and one without or with hardly visible crests. Dark morphs exist for some populations.


Sumbawa and Flores, Indonesia
Less patterned, on underside, which is nearly all-white. No dark morph.


Nepal, NE India, via Burma and Malay Peninsula along Wallace Line to Philippines
Much like nominate except crest. Dimorphic, with the dark morph chocolate-brown all over, tail base might appear lighter in flight.

Gamauf et al. (2005) analyzed mtDNA cytochrome b and control region sequence data of a considerable number of specimens of the Changeable Hawk-eagle and some relatives. Despite the large sample, even the most conspicuous dichotomy - that between the crested and crestless groups - was not as well resolved as it might have been expected to be.

The 3 small-island taxa also appear as monophyletic lineages. Their placement is even more unresolved, with N. c. floris being apparently a very ancient lineage. The other two seem quite certainly to derive from N. c. limnaeetus. The latter taxon has a confusing phylogeny. Different lineages exist that are apparently not stable in space and time, are best described as polytomy, from which the similar island taxa derive.

Obviously, N. c. limnaeetus does not represent a monophyletic lineage. Neither the biological nor the phylogenetic species concepts, nor phylogenetic systematics can be applied to satisfaction. It appears as if the crested group is close to becoming a distinct species, as is S. c. floris. The island taxa derived from S. c. limnaeetus appear to have undergone founder effects, which has restricted their genetic diversity. In the continental population, genetic diversity is considerable, and the evolutionary pattern of the 2 studied genes did not agree, and neither did the origin of specimens show clear structures. S. c. limnaeetus thus is best considered a metapopulation.

Gamauf et al. (2005) therefore suggest that the island taxa which are obviously at higher risk of extinction are, for conservation considered evolutionary significant units regardless of their systematic status. This case also demonstrates that a too rigid interpretation of cladistics and the desire for monophyletic taxa, as well as universal application of single species concept to all birds will undermine correct understanding of evolutionary relationships.

It would even not be inconceivable to find mainland lineages to group closely with the western island taxa, if little genetic drift had occurred in the initial population. nonetheless, the divergence of this species' lineages seems to have taken place too recently to award them species status, as compared to the level of genetic divergence at which clades are usually considered distinct species.

N. c. limnaeetus appears for all that can be said with reasonable certainty basal pool of lineages in the crestless group that, despite not being monophyletic, should be considered a valid taxon as long as gene flow is possible through its range. In addition, as ancient DNA from museum specimens was used extensively, the possibility of ghost lineages must be considered.

If it is assumed that all or most of the ancient lineages still exist today, considerable recombination must have taken place as the two genes' phylogenies do not agree much, indicating a healthy level of gene flow. Whether this still holds true today remains to be determined. 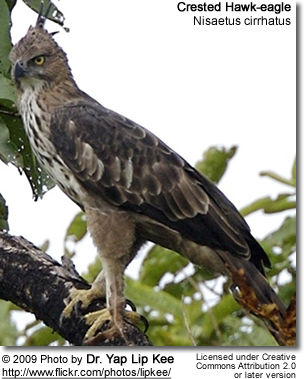