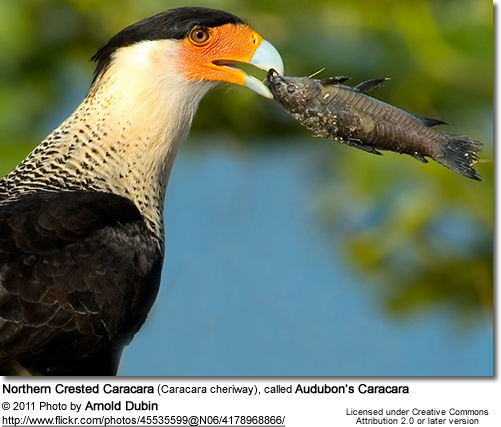 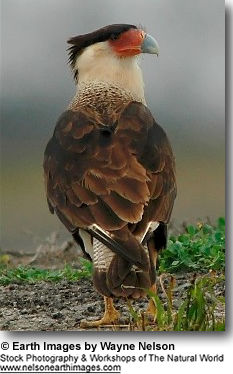 The Northern Caracara is a resident in Cuba, northern South America (south to northern Peru and northern Amazonian Brazil, especially along the Amazon River proper) and most of Central America and Mexico, just reaching the southernmost parts of the United States, including Florida, where it is resident but listed as threatened. There have been reports of the Crested Caracara as far north as San Francisco, California. South of the US border, it is generally common. This is a bird of open and semi-open country. 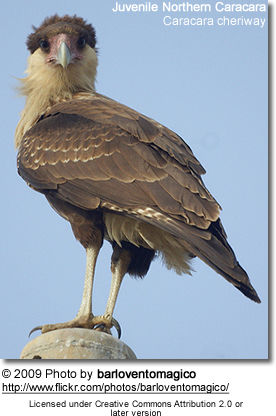 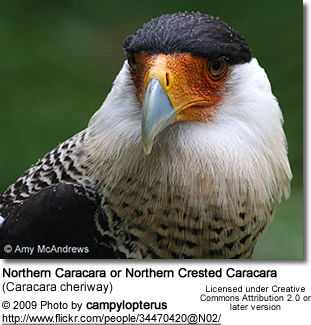 It is broad-winged and long-tailed. It also has long legs and frequently walks and runs on the ground. It is very cross-shaped in flight.

The adult has a black body, wings, crest and crown. The neck, rump, and conspicuous wing patches are white, and the tail is white with black barring and a broad terminal band. The breast is white, finely barred with black. The bill is thick, grey and hooked, and the legs are yellow. The cere (soft skin surrounding the nostrils) and facial skin are deep yellow to orange-red depending on age and mood.

Males and females look alike, but immature birds browner, have a buff neck and throat, a pale breast streaked/mottled with brown, greyish-white legs and greyish or dull pinkish-purple facial skin and cere. The voice of this species is a low rattle.

Adults can be separated from the similar Southern Caracara by their less extensive and more spotty barring to the chest, more uniform blackish scapulars (shoulder feathers) (brownish and often lightly mottled/barred in Southern), and blackish lower back (pale with dark barring in Southern). Individuals showing intermediate features are known from the small area of contact in north-central Brazil, but intergradation between the two species is generally limited. 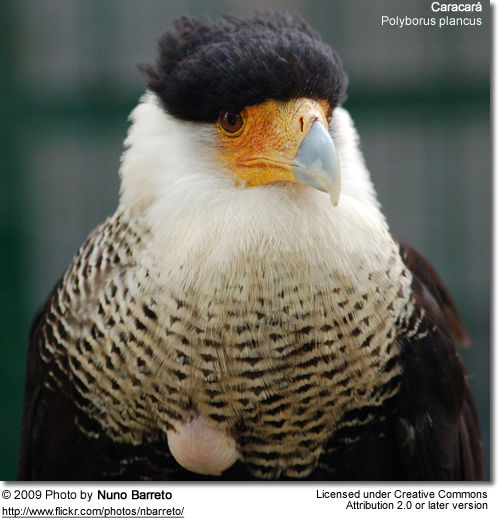 In addition to hunting its own food on the ground, the Northern Caracara will steal from other birds.

Northern Caracaras build large stick nests in trees such as mesquites and palms, cacti, or on the ground as a last resort. It lays 2 to 3 pinky-brown eggs with darker blotches, which are incubated for 28-32 days.

Though the Northern Caracaras of our time are not divided into subspecies as their variation is clinal, prehistoric subspecies are known. Due to the confused taxonomic history of the crested caracaras, their relationships to the modern birds are in need of restudy:

The former almost certainly represents birds which were the direct ancestors of the living population. The latter may actually be the ancestor of the Guadalupe Caracara.

The state of Florida in the United States is home to a relict population of Northern Caracaras that dates to the last glacial period, which ended around 12,500 BP. At that point in time, Florida and the rest of the Gulf Coast was covered in an oak savanna. As temperatures increased, the savanna between Florida and Texas disappeared. Caracaras were able to survive in the prairies of central Florida as well as in the marshes along the St. Johns River. Cabbage Palmettos are a preferred nesting site, although they will also nest in Southern Live Oaks.

They are currently most common in DeSoto, Glades, Hendry, Highlands, Okeechobee and Osceola counties. Loss of adequate habitat caused the Florida Caracara population to decline, and it was listed as threatened by the United States Fish and Wildlife Service in 1987.

The Mexican ornithologist Rafael Martín del Campo proposed that the Northern Caracara was probably the sacred "eagle" depicted in several pre-Columbian Aztec codices as well as the Florentine Codex. This imagery was adopted as a national symbol of Mexico, and is seen on the flag among other places. Since the paintings were interpreted as showing the Golden Eagle, it became the National Bird. 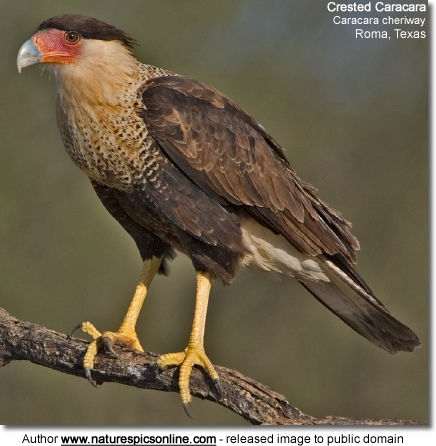