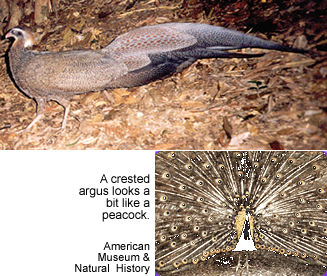 The Crested Argus, Rheinardia ocellata, is a shy and elusive bird that is endemic to Vietnam, Lao PDR and a small population exists in Malaysia in Southeast Asia. It inhabits tropical forests.

This pheasant qualifies as vulnerable because it is undergoing a continuing rapid population decline as a result of regional hunting and a reduction in the extent and quality of its evergreen forest habitat.

The Rheinard's Crested Argus is believed to be still locally common, but the Malay Crested Argus has a limited range and both are threatened by habitat destruction and hunting. This trend is projected to continue. These species are, therefore, evaluated as Near Threatened on the IUCN Red List and they are listed on Appendix I of CITES.

This is a large pheasant is unmistakable -- and could only possibly be confused with the Great Argus pheasant. It can reach up to 7.5 ft (235cm) in length. It has a dark brown spotted black and buff plumage, pink bill, brown iris and blue skin around eye. The head is small, decorated with white erect crest feathers on rear crown. The male has a broad and greatly elongated tail of twelve feathers that are up to 2.6 ft (2 meters) long.

Males attain their adult plumage the third year, but their tails may not reach full length until the sixth year.

The female is smaller than the male, with a much shorter tail. The plumage is darker overall and more barred than spotted as in the males. The head of the female argus also has a distinctive pattern and is crested.

Despite its large size the crested argus is not easy to observe, as it is usually shy and retiring.

The distinctive loud calls indicate that the crested argus is usually solitary and territorial. If out of sight, the bird can be identified by its two distinct calls: one being a prolonged two-toned whistle, the other a soft clucking.

The Crested Argus is relatively unknown in aviculture. To my knowledge, none of them are currently being bred in the United States. The only successful breeding programs appear to have taken place in Vietnam and Malaysia.

The Rheinard's Crested Argus was successfully bred in the 20s by Jean Delacour. The Saigon Zoo has bred this species in the 90s, specifically Dr. Phan Viet Lam oversaw this captive breeding program.

The second sub-species, the Malay Crested Argus, comes from Malaysia and had never been seen in captivity until the Wildlife Department started a breeding project beginning 2000. 3 males and one female were captured, and two of these birds still remain in their breeding complex at Sungkai. They are quite different from the great argus, which is much more commonly seen in captivity, and is also frequently heard in Malaysia and other lowland rainforest countries.

These pheasants are known for their elaborate courtship. During the mating season, males perform a distinctive courtship ritual. His head feathers are ruffled and the crest is spread whilst the male dances in an area of the forest floor cleared of leaves.

Breeding and Caring for your Pheasant