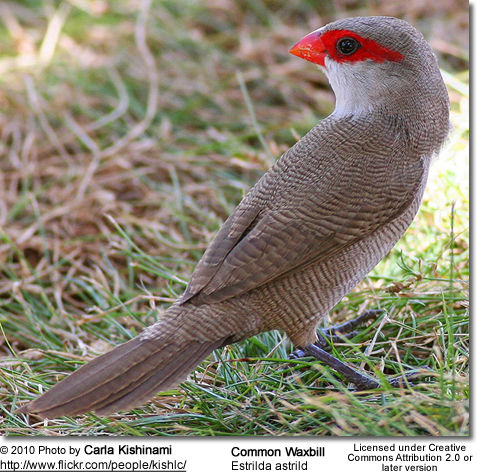 The Common Waxbills (Estrilda astrild), also known as the St Helena Waxbills, are native to sub-Saharan Africa but they have also been introduced to many other regions of the world .

This is a popular aviary bird that is relatively easy to maintain in captivity.

The Common Waxbill is a small bird, averaging 11 to 13 cm in length with a wingspan of 12 to 14 cm. It weighs around 7 to 10 grams. The body is slender and the adult has a bright red bill. The wings are short-rounded. The tail long graduated.

The plumage is mostly grey-brown, finely barred with dark brown. It has a red stripe through the eyes and a reddish stripe along the center of its he belly. The cheeks and throat are whitish and there is often a pinkish flush to the underparts. The rump is brown and the tail and vent are dark.

Females look like males, but they are generally paler with less red on the abdomen,.

Young birds are also duller with little or no red on the abdomen. They have a black bill and fainter dark barring.

The Common Waxbill makes various twittering and buzzing calls. It also has a distinctive high-pitched flight-call. Its song is harsh and nasal, and descends on the last note. 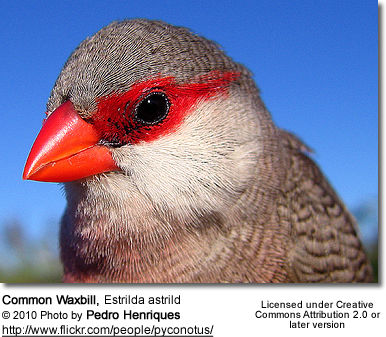 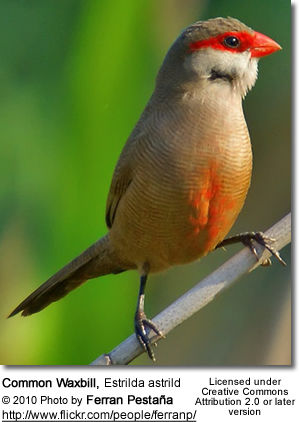 17 subspecies are found across Africa south of the Sahara. They can be found in many parts of East, Central and Southern Africa. Although they are typically found in regions of desert or dense forest.

Common Waxbills are often found near water in marshes and among reeds.

People found them to be pretty confiding and they are often seen visiting gardens, parks and farmland.

Escaped pets and aviary birds have established themselves on many islands around Africa, such as Saint Helena, Ascension Island, the Cape Verde Islands, São Tomé and Príncipe, Mauritius, Réunion, Rodrigues, the Seychelles and Ile Amsterdam.

They could possibly be native on some of these islands

Feral populations in Europe are found in Portugal and are spreading through Spain. Small populations exist on Madeira and Gran Canaria. It has recently appeared on Tenerife and the Azores. In Spain, they have been introduced in Madrid , Barcelona, Valencia and in Spanish-Portuguese boarders.

In America, populations can be found in Trinidad, Brazil and on Bermuda.

In the Pacific there are populations on New Caledonia, Efate Island in Vanuatu, Tahiti and the Hawaiian Islands. 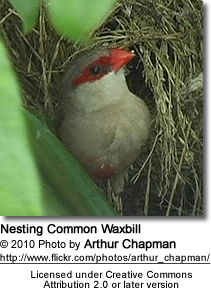 The nest is typically built in a - low down amongst dense vegetation. A second nest may be built on top - it is usually referred to as "cock's nest" as the male sleeps in it.

The nest looks like a large ball of criss-crossed grass stems. It has a long downward-pointing entrance tube on one side.

The average clutch consists of four to seven white eggs. The eggs are incubated for 11 to 13 days. Both the male and the female share the incubation duties, as well as the raising of the chicks.

Their nests may be parasitized by the Pin-tailed Whydah which lays its eggs in the their nests to have their eggs incubated and their chicks raised by them.

In captivity they will breed readily in an aviary and they can raise four broods in a year. 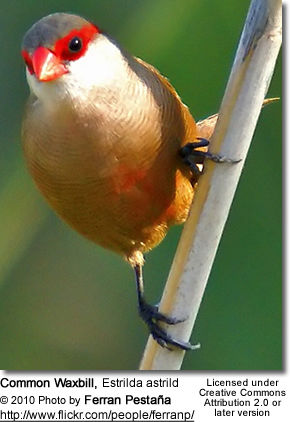 They also feed on insects, particularly during the breeding season when they have a higher requirement for protein in their diet.

The Common Waxbills usually forage in feeding flocks that may contain hundreds or even thousands of buirds.

They are often seen feeding by clinging to the stems with their long, spindly claws and picking from the flower head.

They will also search for seeds on the ground. 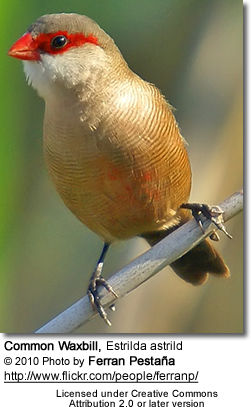 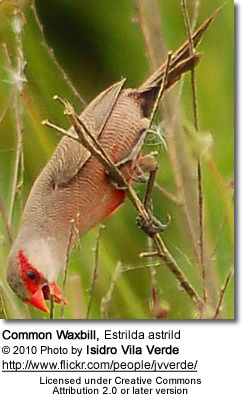