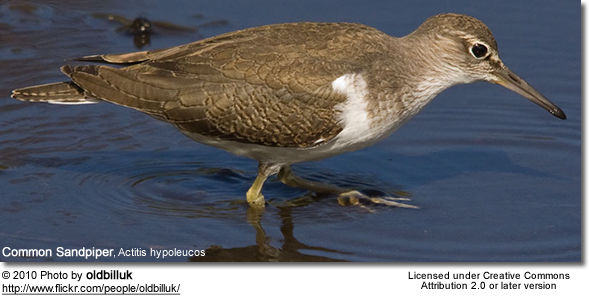 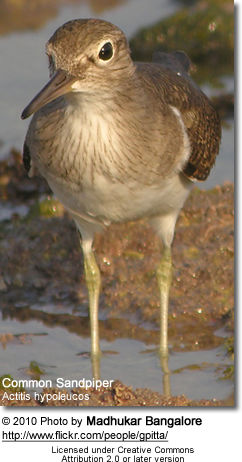 The Common Sandpiper, Actitis hypoleucos, is a small Palearctic wader. This bird and its American sister species, the Spotted Sandpiper (A. macularia), make up the genus Actitis.

They are parapatric and replace each other geographically; stray birds of either species may settle down with breeders of the other and hybridize. Hybridization has also been reported between the Common Sandpiper and the Green Sandpiper, a basal species of the closely related shank genus Tringa.

The adult is 18-20 cm long, with a 32-35 cm wingspan. It has greyish brown upperparts, white underparts, short dark-yellowish legs and feet, and a bill with a pale base and dark tip. In winter plumage, they are duller and have more conspicuous barring on the wings, though this is still only visible at close range. Juveniles are more heavily barred above and have buff edges to the wing feathers.

This species is very similar to the slightly larger Spotted Sandpiper (A. macularia) in non-breeding plumage. But its darker legs and feet and the crisper wing pattern (visible in flight) tend to give it away, and of course they are only rarely found in the same location. 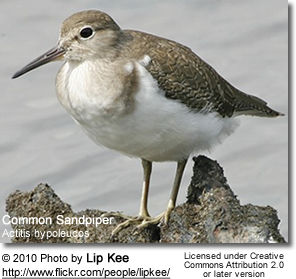 It is a gregarious bird and is seen in large flocks, and has the distinctive stiff-winged flight, low over the water, of Actitis waders.

The Common Sandpiper breeds across most of temperate and subtropical Europe and Asia, and migrates to Africa, southern Asia and Australia in winter.

The eastern edge of its migration route passes by Palau in Micronesia, where hundreds of birds may gather for a stop-over. They depart the Palau region for their breeding quarters around the last week of April to the first week of May.

The Common Sandpiper forages by sight on the ground or in shallow water, picking up small food items such as insects, crustaceans and other invertebrates; it may even catch insects in flight. 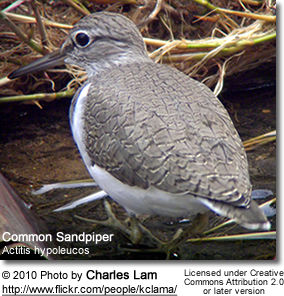 In the Nukumanu language of the Nukumanu Islands (Papua New Guinea), this species is usually called tiritavoi. Another Nukumanu name for it, matakakoni, exists, but this is considered somewhat taboo and not used when children and women are around. The reason for this is that matakakoni means "bird that walks a little, then copulates", in reference to the pumping tail and thrusting head movements the Actitis species characteristically perform during foraging.

It nests on the ground near freshwater. When threatened, the young may cling to their parent's body to be flown away to safety. 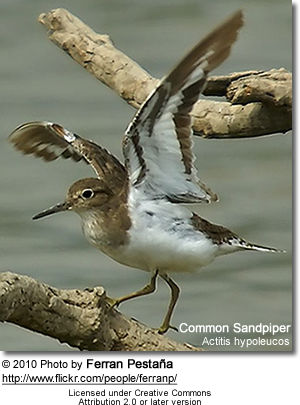 The Common Sandpiper is one of the species to which the Agreement on the Conservation of African-Eurasian Migratory Waterbirds (AEWA) applies.

It is widespread and common, and therefore classified as a Species of Least Concern by the IUCN. 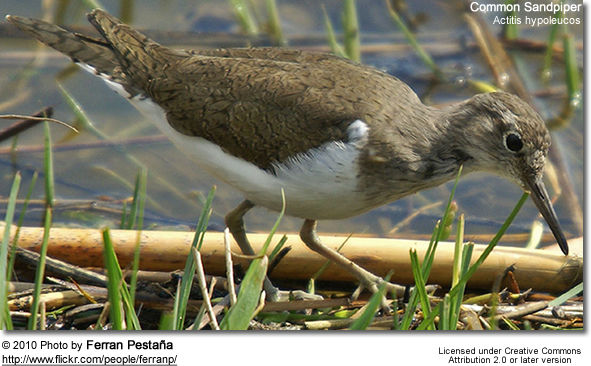 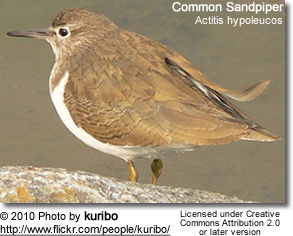 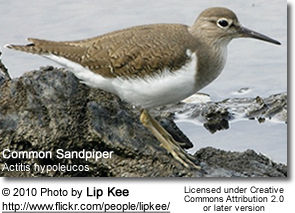