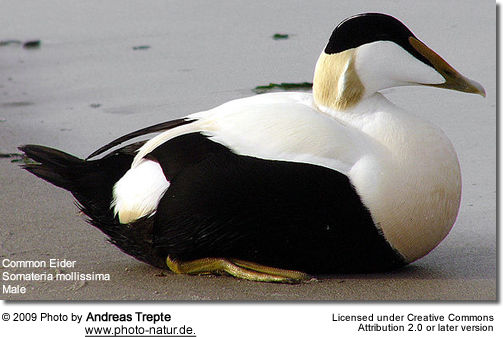 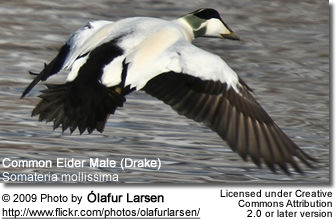 The Common Eider (Somateria mollissima) is sea-duck, which is distributed over the northern coasts of Europe, North America and eastern Siberia. The species is often readily approachable.

It breeds in Arctic and some northern temperate regions, but winters somewhat farther south in temperate zones, when it can form large flocks on coastal waters.

It is abundant, with populations of about 1.5-2 million birds in both North America and Europe, and also large but unknown numbers in eastern Siberia (HBW).

A particularly famous colony of eiders lives on the Farne Islands in Northumberland, England. These birds were the subject of one of the first ever bird protection laws, established by Saint Cuthbert in the year 676. About 1,000 pairs still nest there every year. Because St. Cuthbert is the patron saint of Northumberland, it was natural that the eider should be chosen as the county's emblem bird; the birds are still often called Cuddy's ducks in the area, "Cuddy" being the familiar form of "Cuthbert" 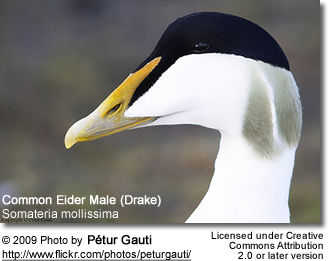 The Common Eider is one of the species to which the Agreement on the Conservation of African-Eurasian Migratory Waterbirds (AEWA) applies.

Eiders are colonial breeders. They nest on coastal islands in colonies ranging in size of less than 100 to upwards of 10,000-15,000 individuals. Female eiders frequently exhibit a high degree of natal philopatry, where they return to breed on the same island where they were hatched. This can lead to a high degree of relatedness between individuals nesting on the same island, as well as the development of kin-based female social structures. This relatedness has likely played a role in the evolution of co-operative breeding behaviours amongst eiders. Examples of these behaviours include: laying eggs in the nests of related individuals and crèching, where female eiders team up and share the work of rearing ducklings.

The eider's nest is built close to the sea and is lined with the celebrated eiderdown, plucked from the female's breast. This soft and warm lining has long been harvested for filling pillows and quilts, but in more recent years has been largely replaced by down from domestic farm-geese and synthetic alternatives. Although true Eiderdown pillows or quilts are now a rarity, eiderdown harvesting continues and is sustainable, as it can be done after the ducklings leave the nest with no harm to the birds. 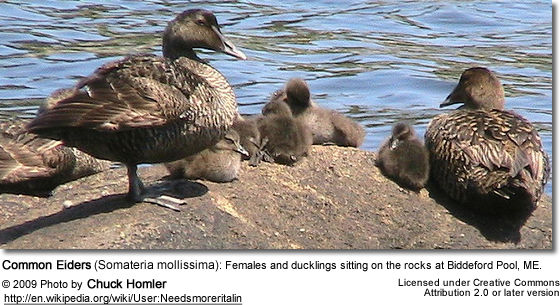 The Common Eider is a large (50-71 cm body length) sea-duck that is characterized by its bulky shape and large wedge-shaped bill.

The male is unmistakable with its black and white breeding plumage and green nape. Below are photos of a non-breeding and an immature male.

The female is a brown bird, but can still be readily distinguished from all ducks, except other eider-species, on the basis of size and head shape.

Call / Vocalizations: This duck's call is a pleasant "ah-ooo." 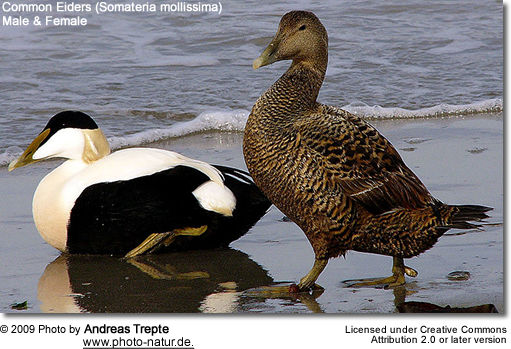 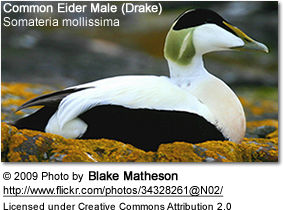 This species dives for crustaceans and mollusks, with mussels being a favored food. The Eider will eat mussels by swallowing them whole, the shells are then crushed in their stomachs and excreted. When eating a crab the Eider will remove all of its claws and legs and then eat the body in a similar fashion.

Copyright: Wikipedia. This article is licensed under the GNU Free Documentation License. It uses material from ... Additional info is provided by Avianweb.