Parrots in their natural habitat and as pets

A list of all parrots by common name in alphabetical order 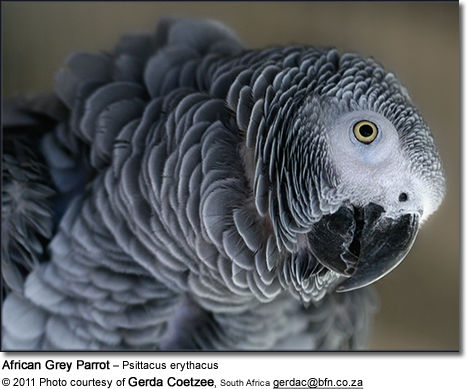 Parrots or Psittacines (order Psittaciformes) includes about 353 species of bird which are generally grouped into two families:

All members of the order have a characteristic curved beak shape with the upper beak having slight mobility in the joint with the skull and a generally erect stance.

All parrots are zygodactyl, having the four toes on each foot placed two at the front and two back. In length, parrots range from the buff-faced pygmy parrot of New Guinea at 8.4 cm (3.3 in) to the hyacinth macaw of South America at 100 cm (39.4 in). 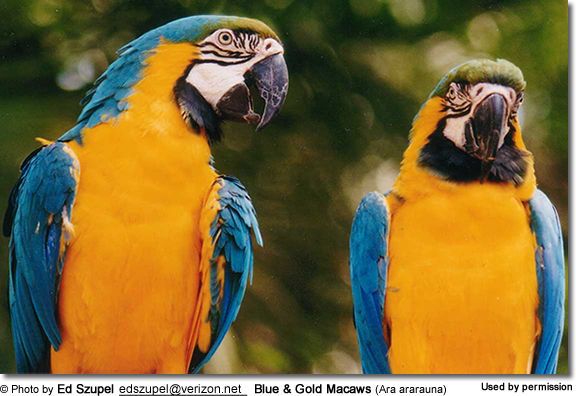 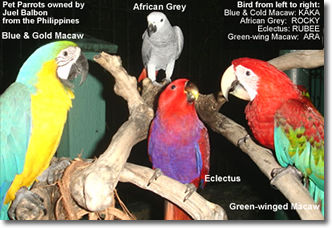 Parrots can be found in most of the warm parts of the world, including India, southeast Asia and west Africa. By far the greatest number of parrot species, however, come from Australasia, South America and Central America.

The Thick-billed Parrots (Rhynchopsitta pachyrhyncha) is one of only two species native to the United States - the other being the now extinct Carolina Conure. The Puerto Rican Amazon is the only remaining native parrot in United States territory and one of the 10 most endangered bird species in the world.

However, many non-native feral parrots have established themselves in California, Florida, Connecticut, Rhode Island, New Jersey, Arizona, Hawaii and Texas. 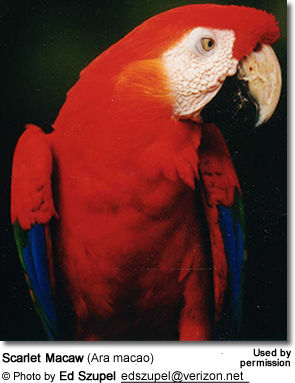 Parrots are kept as pets, particularly conures, macaws, Amazons, cockatoos, African Greys, lovebirds, Cockatiels, and Budgerigars / Parakeets, because of their rich and varied coloration. Sometimes the wings of such birds are clipped, but many people keep flighted pet parrots. Some parrot species, including cockatoos, Amazon parrots, African Grey Parrots and the larger macaws, have very long life-spans of up to 80 years.

The popularity of parrots as pets has led to a thriving - and often illegal - trade in the birds, and some species are now threatened with extinction.

Should you consider adding a parrot to your home, please visit this website for guidance as to what pet bird will complement your lifestyle and how to properly care fo it.

Many species can imitate human speech or other sounds, and the results of a study by Irene Pepperberg suggest a high learning ability in an African Grey Parrot named Alex. Alex has been trained to use words to identify objects, describe them, count them, and even answer complex questions such as "How many red squares?" with over 80% accuracy. Other scholars claim that parrots are only repeating words with no idea of their meanings and point to Pepperberg's results as being nothing but an expression of classical conditioning, or possibly a manifestation of the Clever Hans effect.

Escaped parrots of several species have proved surprisingly hardy in adapting to conditions in Europe and North America. They sometimes even multiply to the point of becoming a nuisance, or a minor pest and a threat to local ecosystems; this is now occurring in Spain, in Barcelona and Tenerife.

A sizable population of naturalized Rose-ringed Parakeets (Psittacula krameri) exists in and around cities in England, the Netherlands, Belgium and western and southern Germany. They are believed (and in some cases documented to have descended from escaped or released pets. The largest UK roost of these is thought to be in Esher, Surrey, numbering several thousand.

Often flocking with the naturalized P. krameri populations in Belgium and England are smaller populations of Alexandrine Parakeets (Psittacula eupatria).

There are also populations of the Monk Parakeet (Myiopsitta monachus) which have established themselves in many areas of the United States and Spain. 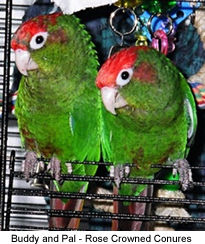 Parrots as vulnerable or endangered species

Feeding Habits of the Parrots

In their natural habitat, parrots feed on a variety of plant foods, buds, leaves, seeds, grains, nuts and fruit - and even insects.

Their strong bill and muscular tongue allows them to feed on fruits and break seeds that would otherwise be difficult for other animals to crack. Parrot bills have evolved the ability to crush the largest seeds. Many plants have built up chemical and mechanical defenses to ward off herbivores. However, parrots have become practically immune to the plant's defenses. They digest clay from riverbanks to detoxify the toxic chemicals in the seed/fruit. Alternatively, they eat small amounts of toxic seeds and combine them with a larger amount of harmless seeds, therefore substantially decreasing the potential harm.

More about the diet of parrots.

How Long Do Parrots Live As Pets?

How Long Do Parrots Live As Pets?

In reply to How Long Do Parrots Live As Pets? by Anonymous (not verified)

The length of time that…

The length of time that parrots live as pets varies from species to species.
The African Grey Parrot has a lifespan of up to eighty years.
Amazon Parrots live anywhere from fifty to sixty years.
Macaws can live up to one hundred years.
Cockatiels typically live up to twenty years.
Cockatoos live up to seventy years.
Conure just six to eight years.
Green Wing Macaw has a lifespan of sixty years.
Eclectus Parrot will live anywhere from thirty to forty years.
Hawk Headed Parrot can live up to fifty years.
help your pet live a longer and healthier life may not be as obvious. Many times owners use a cage that is too small for the bird.

Make sure your parrot has plenty of room to move around. Take them out of their cage regularly to help them get plenty of exercise.